SAN RAFAEL, Calif. (AP) — Californians on Wednesday found themselves facing winds, wildfires, and darkness from yet another power outage that hit more than 1 million people.

Frustration and anger mounted across Northern California as Pacific Gas & Electric Co., the state’s largest utility, began the third round of sweeping blackouts in a week aimed at preventing its electrical equipment from being fouled by wind-whipped branches or toppling and sparking wildfires.

PG&E said Tuesday’s blackouts would affect about 1.5 million people in some 30 counties including the Sierra foothills, wine country and San Francisco Bay Area. They included 1 million still without power from a shut-off over the weekend. 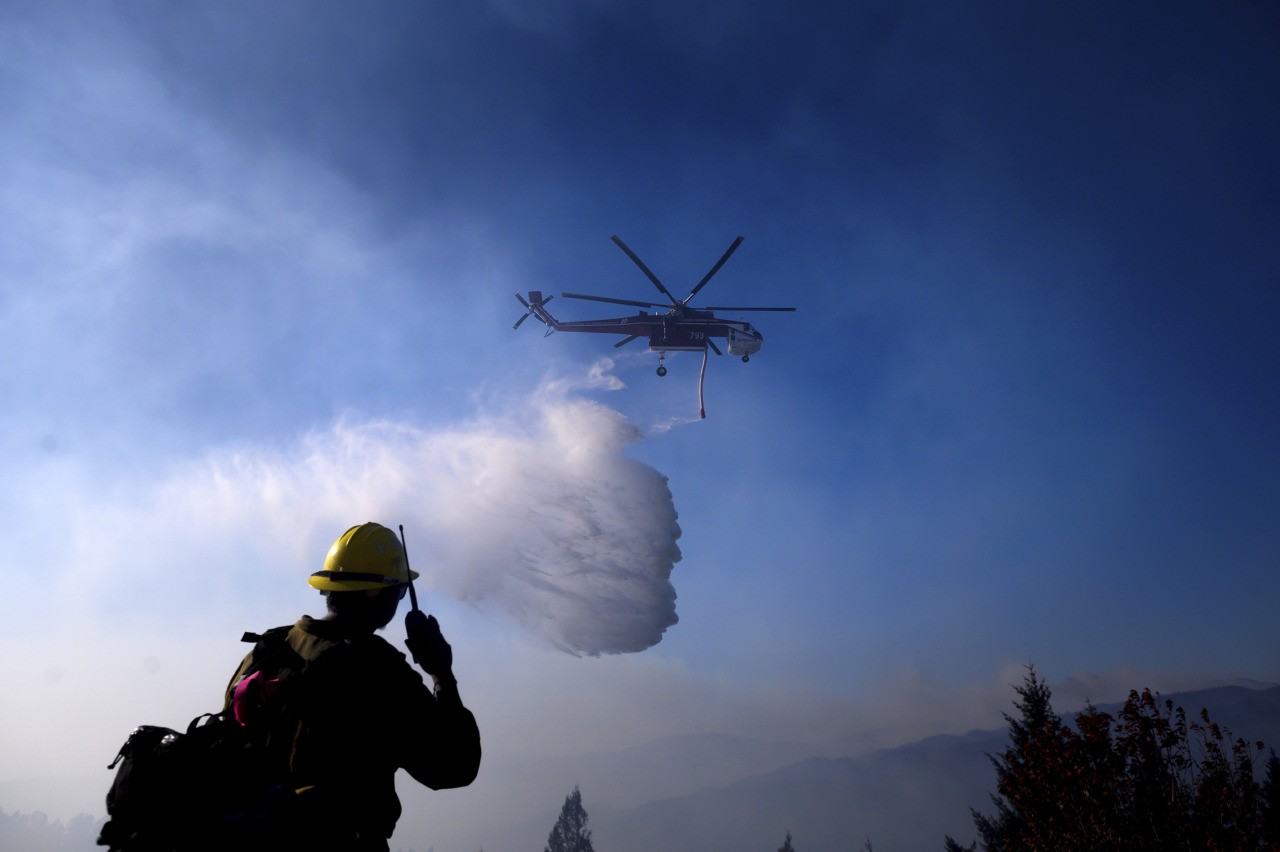 With no electricity for the fourth straight day, chef and caterer Jane Sykes realized she would have to throw out $1,000 worth of food, including trays of brownies, cupcakes and puff pastry.

She also had little hope of getting a good night’s sleep — there was no way to run the machine she relies on to counter her apnea.

“I don’t think PG&E really thought this through,” she lamented.

PG&E officials said they understood the hardships caused by the safety blackouts but continued to insist they were necessary.

In wine country north of San Francisco, firefighters coped gusts while tackling a wildfire that has burned 86 homes and charred an area more than twice the size of San Francisco. About 90,000 buildings remained threatened. More than 150,000 people were under evacuation orders.

Winds topped out at 70 mph (112 kph) north of San Francisco Bay and began to ease early Wednesday, but forecasters said fire danger would remain because of continuing breezes and very dry air.

In Southern California, Santa Ana winds developed more slowly Wednesday than expected but were topping 50 mph (80 kph) in some areas before dawn. 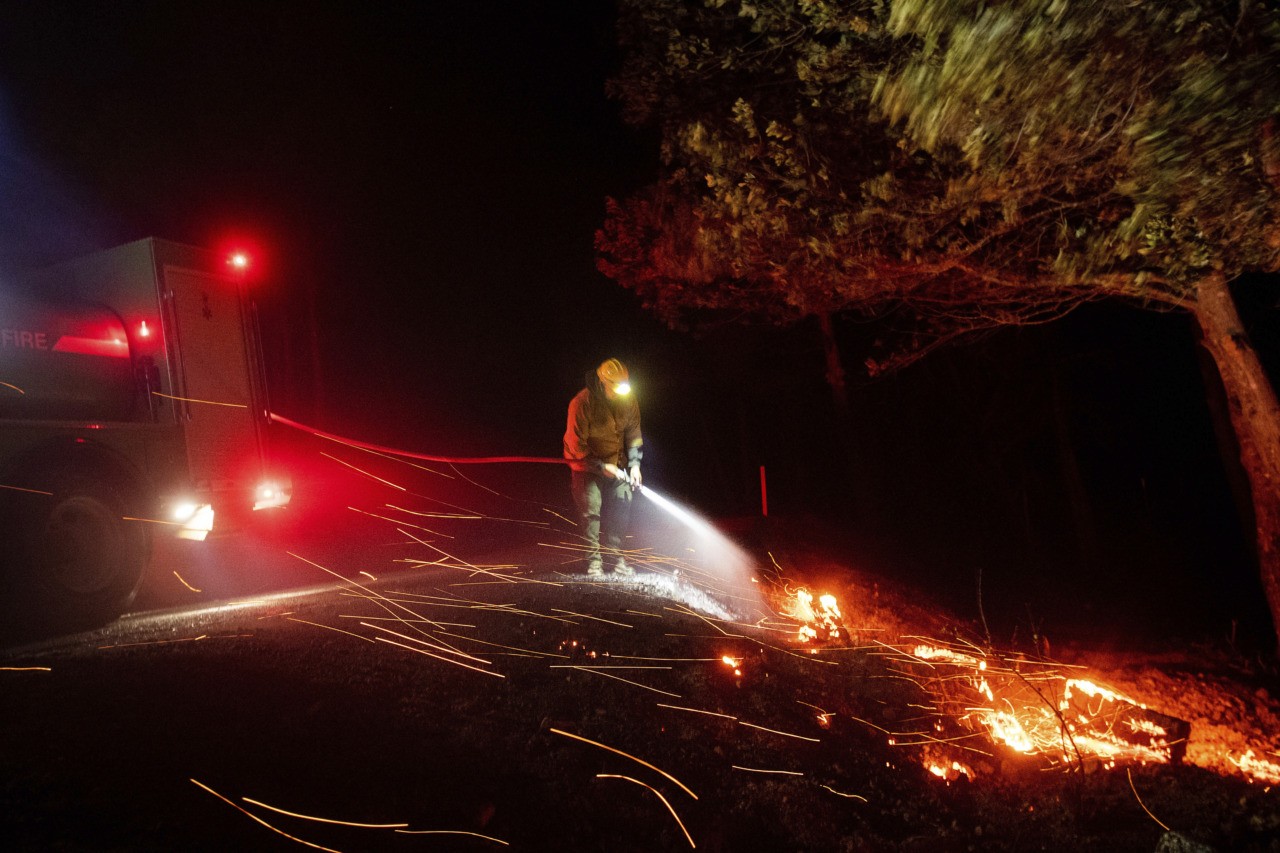 The National Weather Service said the strongest winds were to the west of the section of Los Angeles where a wildfire destroyed a dozen homes on Monday.

About 9,000 people, including Arnold Schwarzenegger and LeBron James, remained under evacuation orders.

That fire was caused when a dry branch from a eucalyptus tree was flung 30 feet (9 meters) by high winds into a city Department of Water and Power line, which short-circuited and sparked, the utility and Fire Department announced Tuesday.

The power line had been operating safely and the DWP had cut away brush and trees from around the line, officials said.

Mayor Eric Garcetti called it an “act of God.”

The National Weather Service called an extreme red flag warning for much of Southern California through Thursday evening, with some wind gusts reaching 80 mph (128.74 kph). It could be the strongest wind event in years.

Coupled with tinder-dry brush and low humidity, they could blow the smoldering fire back to life and spread embers to start new blazes, authorities warned.

Southern California Edison, which had previously made safety shutoffs and then restored power, cut power to 38,000 customers and warned that it could black out more than 300,000 customers, or some 600,000 people.

Also Tuesday, Edison announced in a quarterly earnings report that it was “likely” its equipment caused last year’s Woolsey Fire, which killed three people and destroyed hundreds of homes in a swatch stretching from north of Los Angeles south through Malibu to the sea.

No deaths were reported from the current fires but weekend gusts may have claimed three lives. A 55-year-old homeless woman was crushed by a falling tree during high winds Sunday at a Santa Cruz campsite and a couple was killed the same day in a remote area of Madera County when a tree fell on their Jeep, which then crashed.

Across Northern California, people who weren’t facing another day as fire refugees were worried about charging cellphones and electric vehicles, finding gasoline and cash, staying warm and keeping their food from spoiling.

Some ended up at centers set up by PG&E where people could go to power their electronics and get free water, snacks, flashlights and solar lanterns.

In Placer County, Angel Smith relied on baby wipes and blankets to keep her 13-month-old son Liam warm and clean. The family has been without power since Saturday night and cannot draw well water without electricity.

She ran a cord from her neighbors’ generator to keep her phone and tablet charged so the two could watch movies. Temperatures were expected to drop below freezing overnight in parts of Northern California.

“The hardest part about this for me has been making sure I keep my son warm as it gets cold here,” Smith said.

PG&E, which is in bankruptcy after its equipment was blamed for a string of disastrous fires over the past three years, including a blaze that all but destroyed the town of Paradise and killed 85 people, has said its foremost concern is public safety.

But Gov. Gavin Newsom and top utility regulators have accused the company of mismanaging its power system and failing for decades to make the investments needed to ensure it’s more durable. He and others have also complained that the utility has botched the outages by not keeping the public adequately informed.

PG&E Corp. President Bill Johnson says he talked to Newsom Tuesday and told him he agreed with his suggestion that the company give credits to customers who’ve been hit by pre-emptive power shut-offs. Newsom had suggested $100 per household, or $250 per business.

Johnson said the utility has agreed to provide a “one-time bill credit” for people impacted by an Oct. 9 power cutoff that affected some 2 million people. But he didn’t confirm a figure, saying the mechanics had yet to be worked out.

“We have agreed to move forward with a one-time bill credit for customers impacted by that event.”