Speaking during a visit to reserve soldiers serving along Israel’s northern border, the prime minister’s comments, reported by Channel 10, are a rare admission that the IDF is actively involved in operations on the Syrian front. 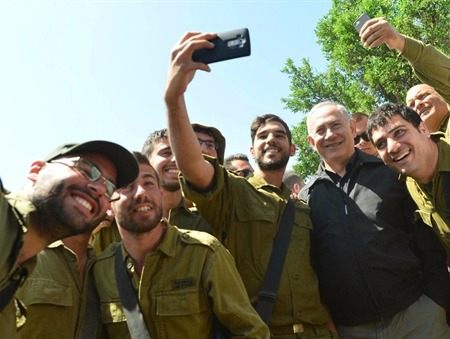 “We act when we need to act, including here, across the border, in dozens of attacks, in order to prevent game-changing arms from reaching Hezbollah,” Netanyahu said during a visit to a reserve paratroop brigade that is currently conducting a large-scale drill in Israel’s north.

“We have ISIS behind the fences here, Hezbollah behind the fences here as well as there, we have Hamas and Islamic Jihad in Gaza, and global jihad and ISIS in the Sinai,” Netanyahu told the troops, who were thrilled by the visit and took the time to capture selfie photos with the prime minister.

“We are proud,” Netanyahu said, “that across this tumultuous, excitable, and jittery Middle East, we have succeeded in maintaining relative calm and relative security in the State of Israel.”

“We also act on other fronts, both near and far, but we do this with deliberation. If we are called to go to war, and this is something that may happen and this is why you’re here, it is because we could not prevent danger from arriving at Israel’s doorstep in any other way and after we gave you the best tools to decisively win the battle for the country. No one will protect this country but us,” he said. 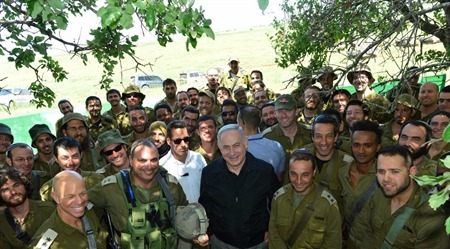 Israel has attacked Hezbollah arms convoys inside Syria on several occasions, according to foreign media reports. In other instances, Israeli Air Force jets have struck convoys and arm depots as far as in Sudan. Israeli officials routinely avoid commenting on the reports, neither denying or confirming them.

The army has maintained a similar policy of opacity following a series of recent incidents in which Hamas terrorists were killed while building tunnels in the Gaza Strip. The Gaza-based terror group often says the tunnels collapse due to bad weather and has avoided openly accusing Israel of involvement in the incidents.