(AFP) Clashes erupted as thousands of Gazans marched near the Israeli border in a major protest on Friday, with five Palestinians killed and more than 50 wounded.

Some Gazans estimated the total number of protesters in the tens of thousands, including women and children.

They gathered at multiple sites throughout the blockaded territory, which is flanked by Israel along its eastern and northern borders, AFP correspondents said.

The Palestinian Red Crescent reported 201 people wounded from live fire, while the health ministry in the Gaza Strip said four people were killed during the clashes.

“The rioters are rolling burning tyres and hurling firebombs and rocks at the security fence and at (Israeli) troops, who are responding with riot dispersal means and firing towards main instigators.” 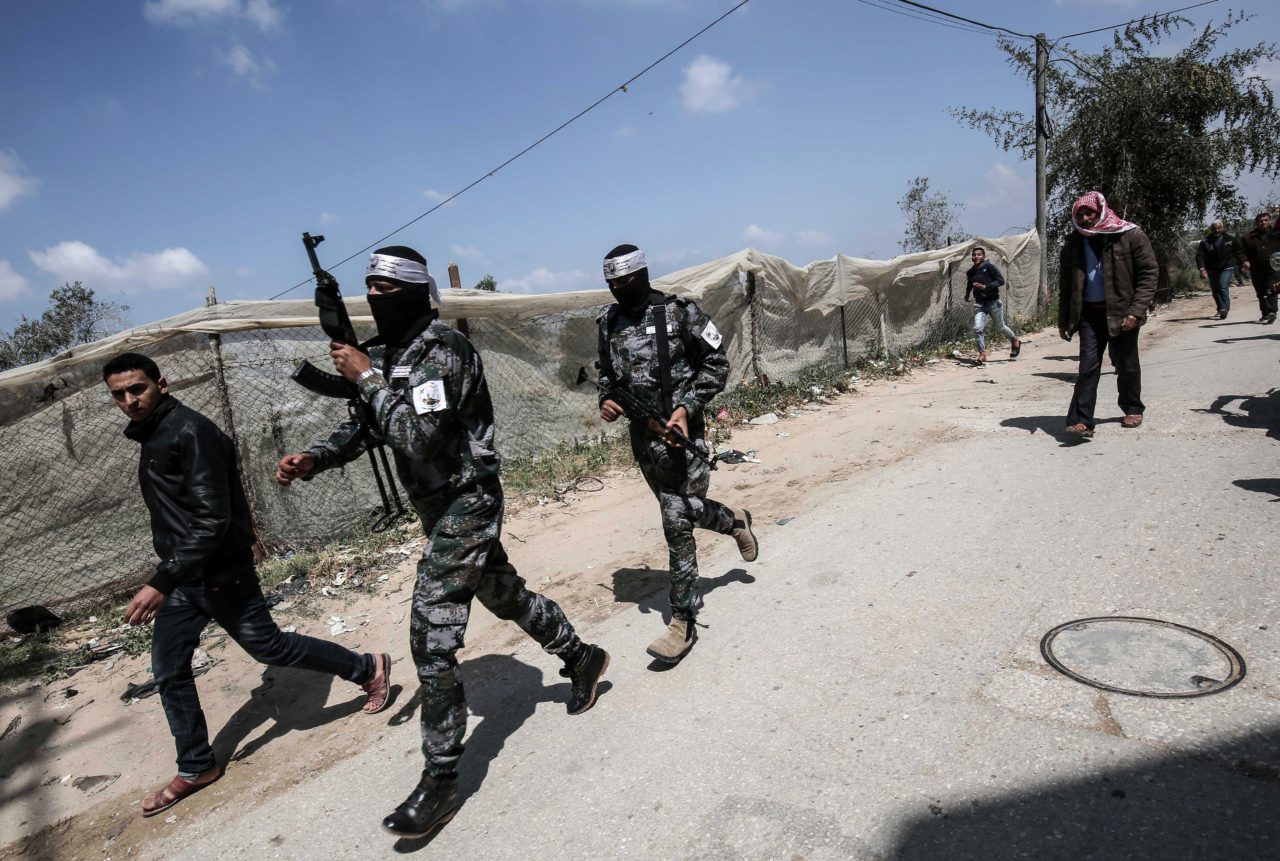 Palestinian fighters from the Fatah movement march with Kalashnikov assault rifles during a funerary procession for 27-year-old farmer Omar Samour, who was killed earlier in the day by Israeli tank fire, in Khan Yunis, in the southern Gaza Strip on March 30, 2018. (SAID KHATIB/AFP/Getty Images) 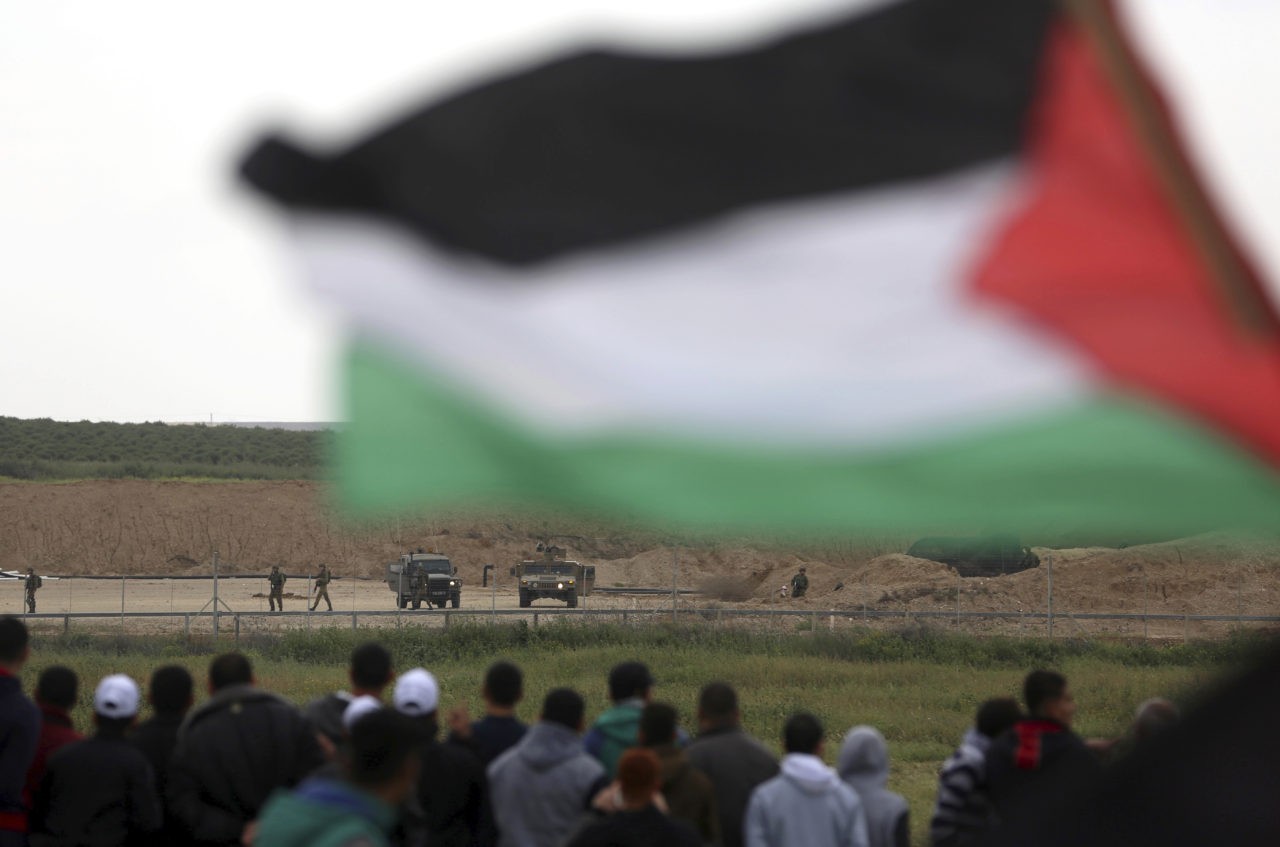 Protesters, one holding a Palestinian flag, stand in front of Israeli soldiers during a demonstration near the Gaza Strip border with Israel, in eastern Gaza City, Friday, March 30, 2018. (AP Photo/ Khalil Hamra) 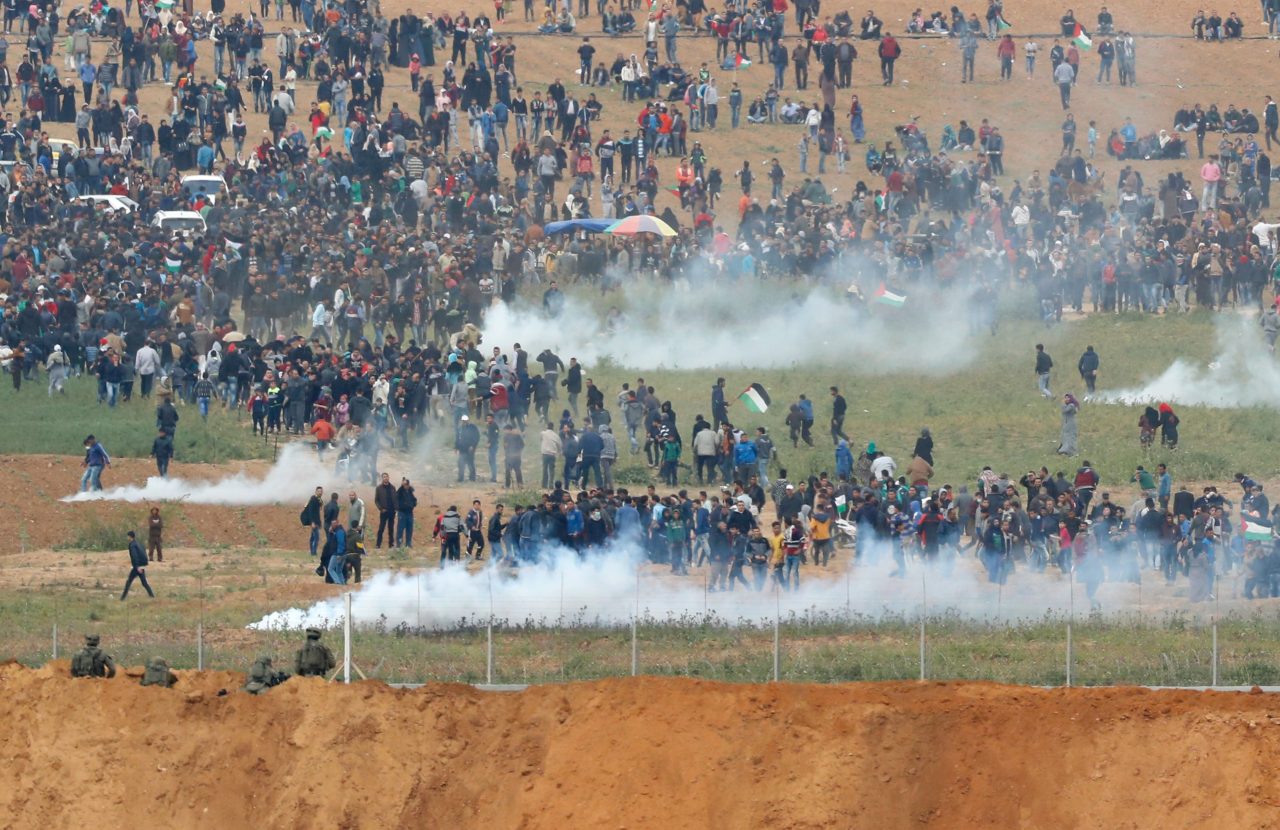 A picture taken on March 30, 2018 from the southern Israeli kibbutz of Nahal Oz across the border from the Gaza strip shows tear gas grenades falling during a Palestinian tent city protest. ( JACK GUEZ/AFP/Getty Images) 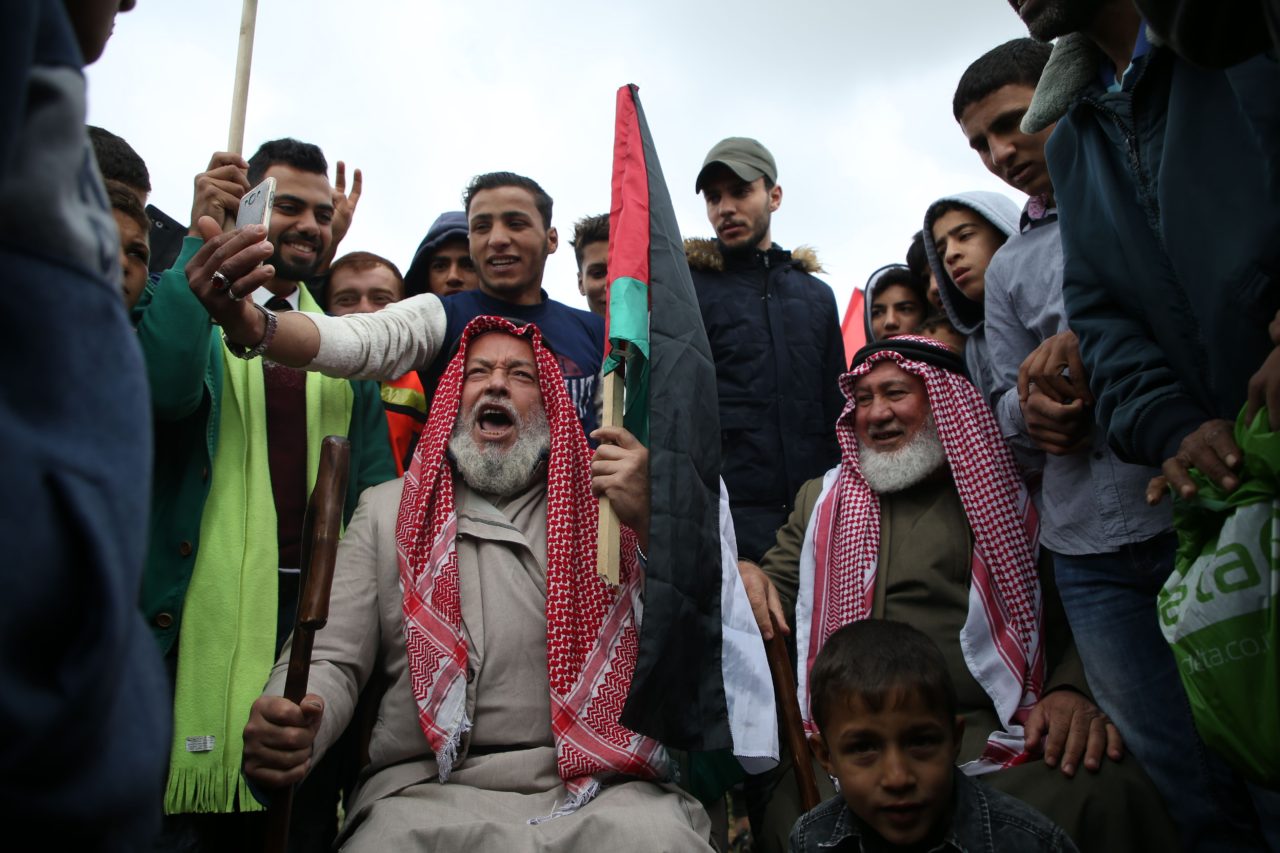 A Palestinian youth uses a cell phone to take a “selfie” photograph while another man chants slogans as he holds a Palestinian flag during a demonstration near the border with Israel east of Jabalia in Gaza. (MOHAMMED ABED/AFP/Getty Images)

Earlier in the day, before the main protests began, a Palestinian farmer was killed by Israeli tank fire near the border, the health ministry said.

Organisers said the six-week protest would run until the inauguration of the new US embassy in Jerusalem around May 14.

The upcoming embassy move has added to tensions surrounding the march.

Israel announced a “closed military zone in the area surrounding the Gaza Strip,” accusing its Islamist rulers Hamas of using the lives of civilians “for the purpose of terror.”

It has deployed reinforcements, including more than 100 special forces snipers, for fear of mass attempts to break through the security fence.

Israeli Defence Minister Avigdor Lieberman said in a Twitter post directed to Gazans in both Hebrew and Arabic that “Hamas’s leadership is playing with your life.”

“Anyone who approaches the fence today will be putting themselves in danger.”

US President Donald Trump’s recognition of Jerusalem as Israel’s capital in December has infuriated Palestinians, who claim its annexed eastern sector as the capital of their future state.

Hamas has fought three wars with Israel since 2008.

Protests along the border are common, often culminating in young Palestinian men throwing stones at Israeli soldiers who respond with tear gas, and rubber and live bullets.

The March of Return protest is different because it is intended to include families with women and children camping near the border for weeks.

Five main camp sites have been set up spanning the length of the frontier, from near the Erez border crossing in the north to Rafah where it meets the Egyptian border in the south.

Cultural events are planned in the larger communal tents, including traditional Palestinian dabke dancing, while tens of thousands of meals will be handed out on Friday, organisers said.

Israel’s ambassador to the United Nations, Danny Danon, on Thursday labelled the protest an “organised planned provocation” and reiterated “Israel’s right to defend its sovereignty and protect its citizens.” 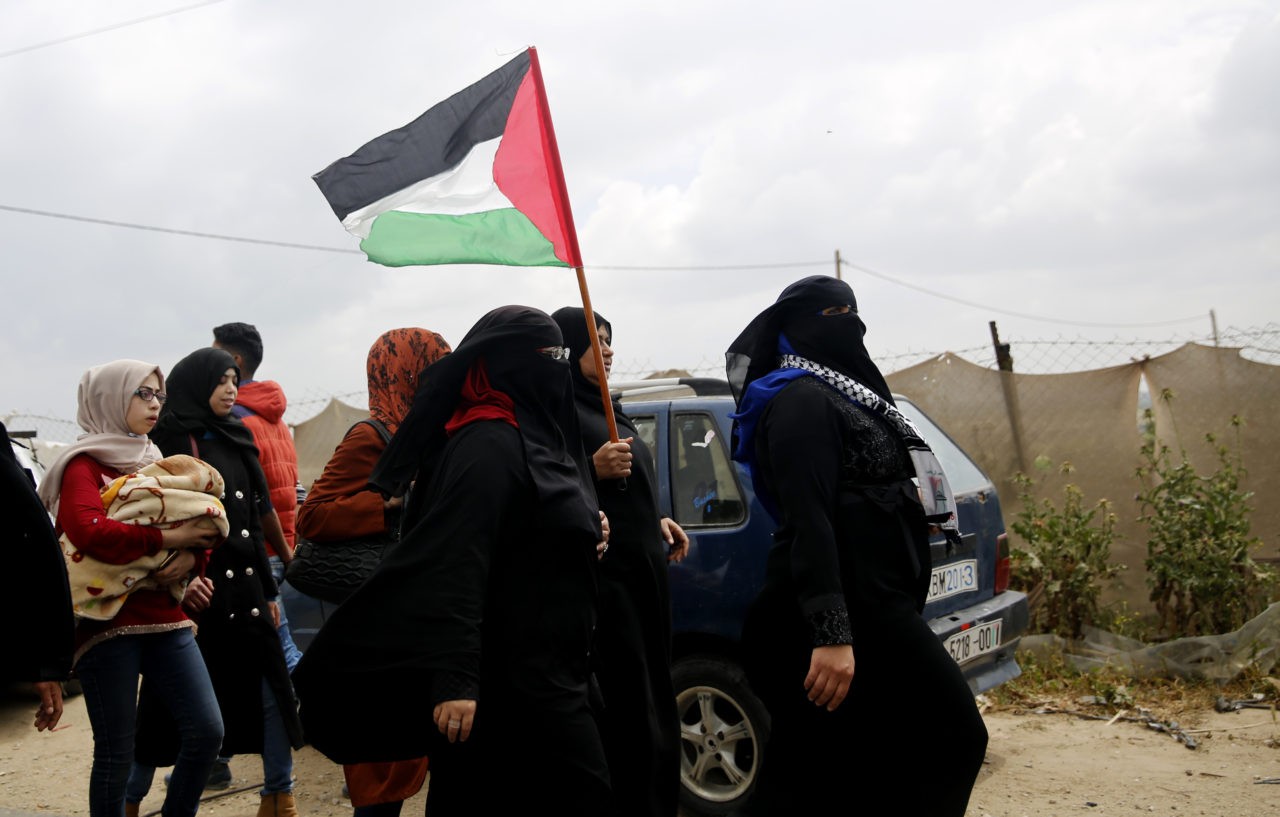 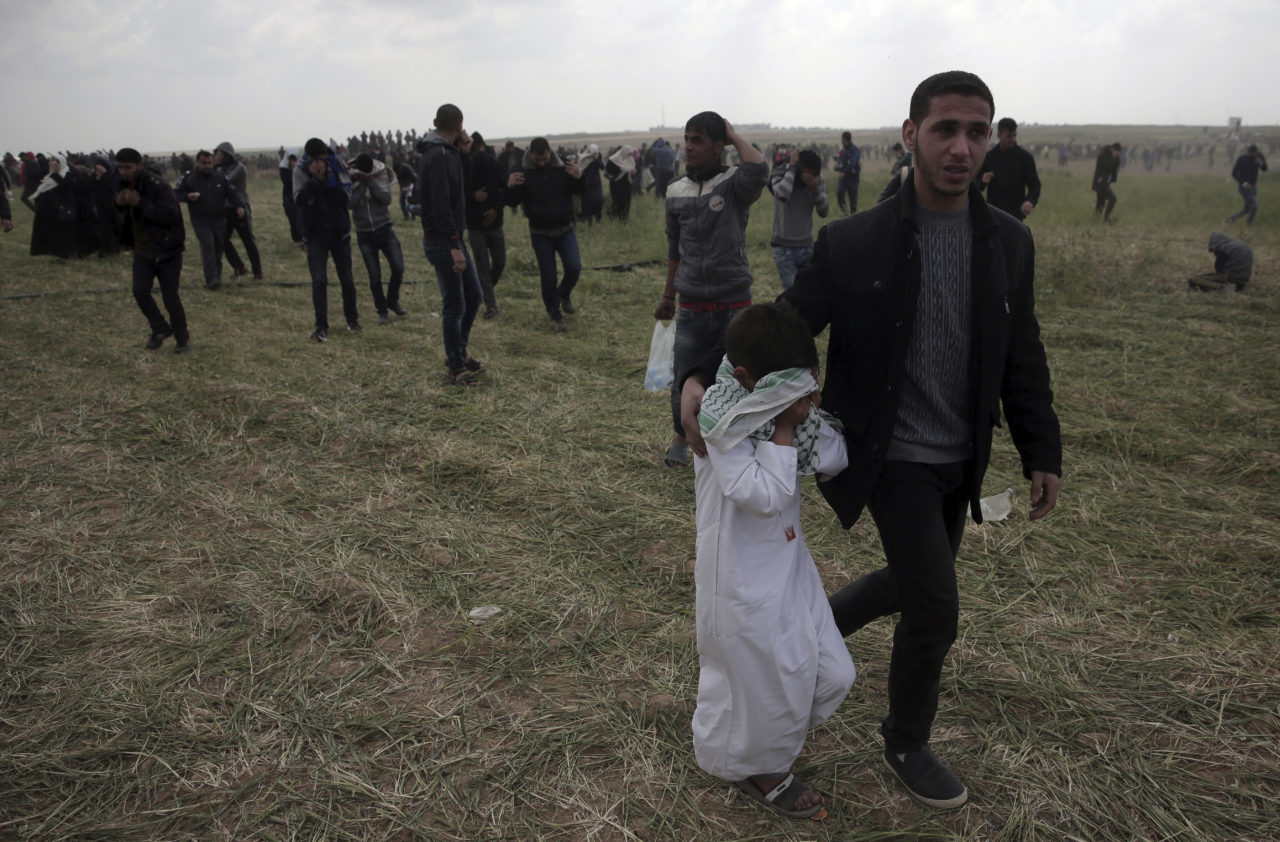 Palestinian protesters cover their faces from teargas fired by Israeli troops during a demonstration near the Gaza Strip border with Israel, in eastern Gaza City, Friday, March 30, 2018. (AP Photo/Khalil Hamra)