JERUSALEM, Israel — For the mainstream media, the opening of the U.S. embassy in Jerusalem on Monday was obscured by the violence orchestrated by the Hamas terrorist group at the border of Gaza.

But for those at the embassy itself, the ceremony was a moving experience, a unique moment in history when 23 years of promises, and thousands of years of hope, were finally fulfilled.

The guests — members of Congress, Israeli leaders, military officials from both countries, and American supporters of Israel — were bused to the ceremony from Teddy Stadium, the home grounds of the Jerusalem soccer team that renamed itself for President Donald Trump this week in honor of his support for Israel.

At the facility — still the U.S. consulate annex for a few more hours — there were a handful of Trump supporters, standing by Trump campaign signs, waving American and Israeli flags, and wearing “Make America Great Again” hats. 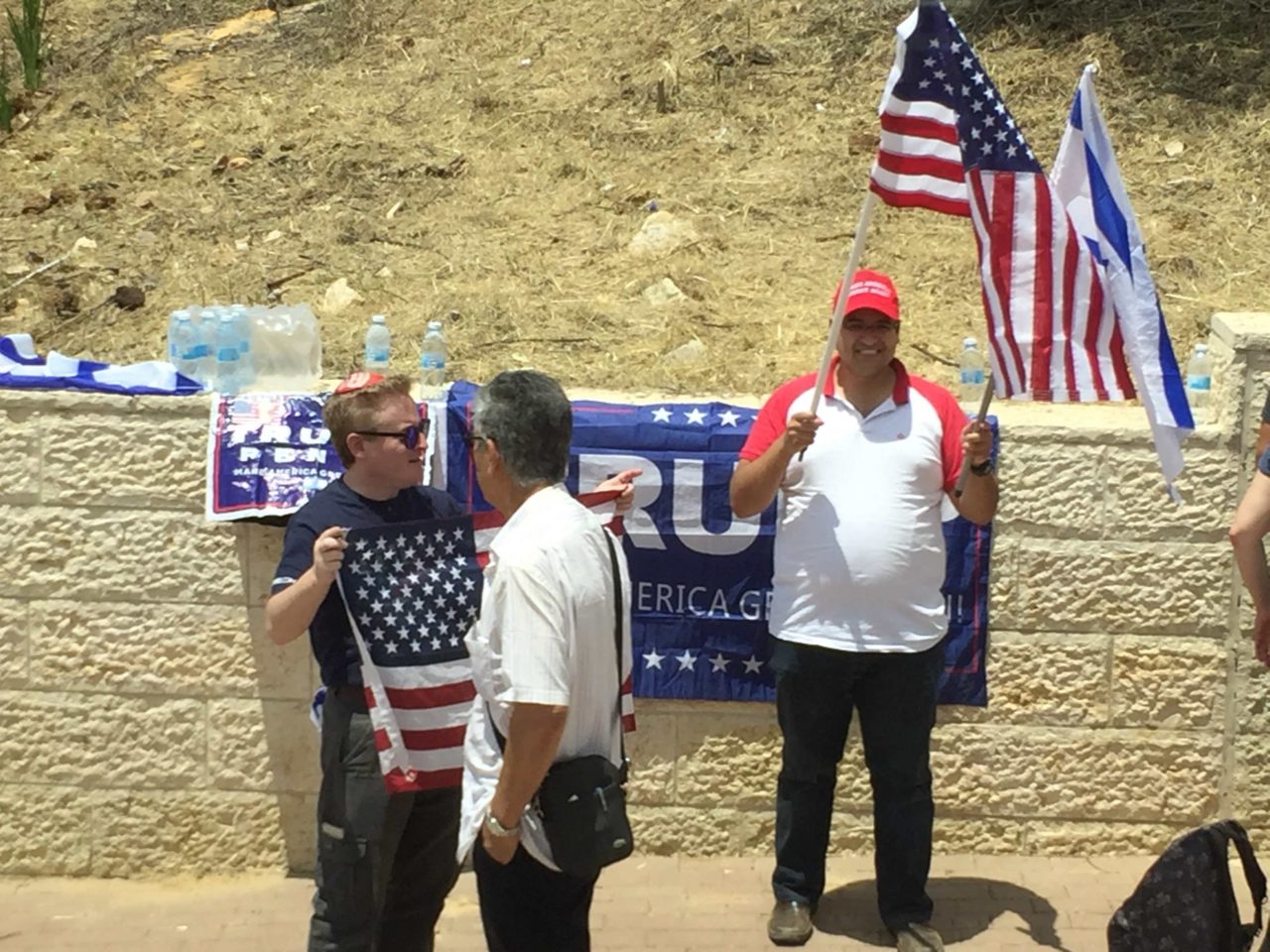 Other supporters stood on a distant hill overlooking the facility, where they were later joined by a handful of protesters.

Outside, the new sign welcoming visitors to the embassy had already been erected. 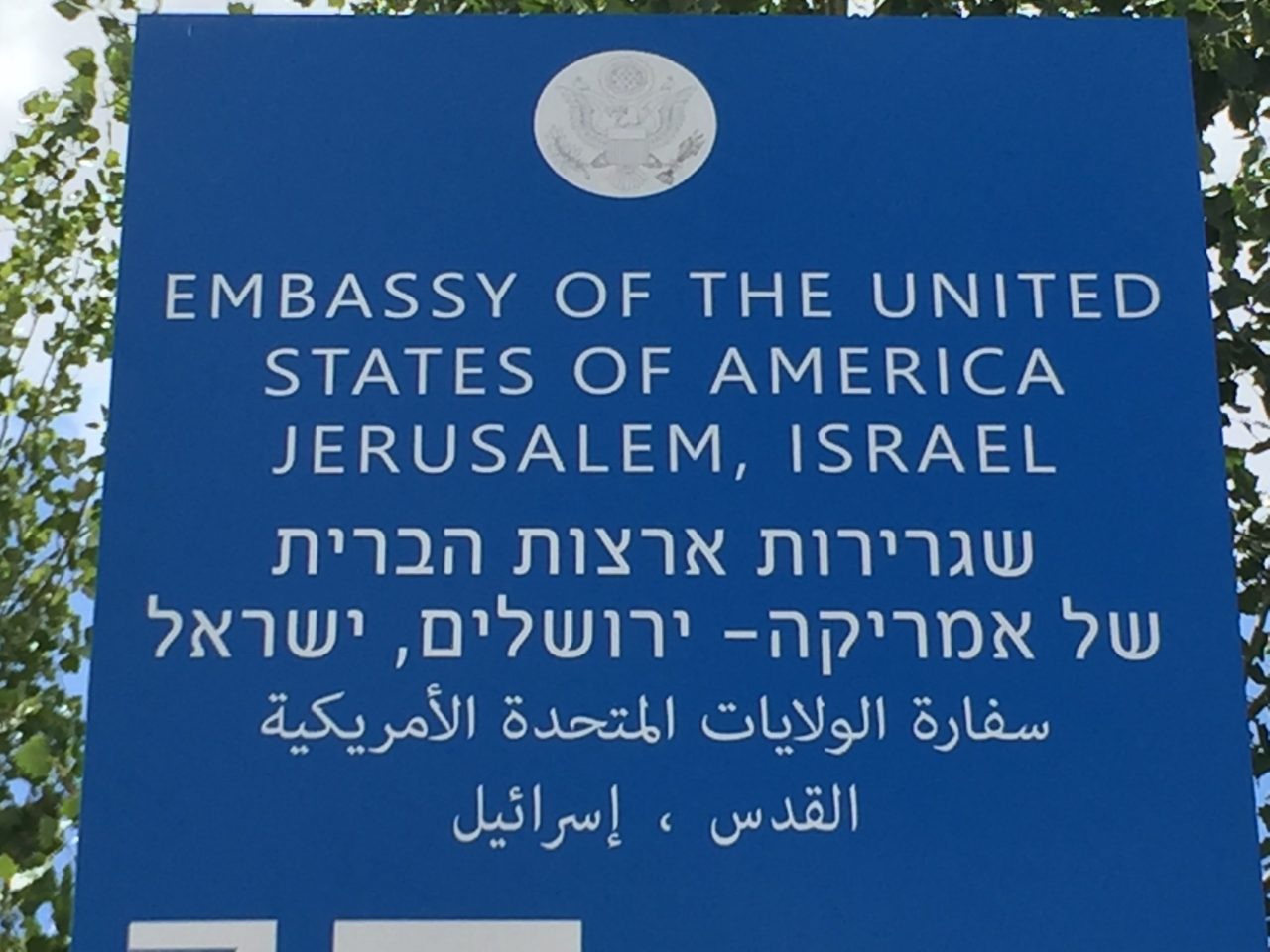 Below it, a smaller sign indicated that the square in front of the embassy had been renamed in honor of the United States and President Trump. 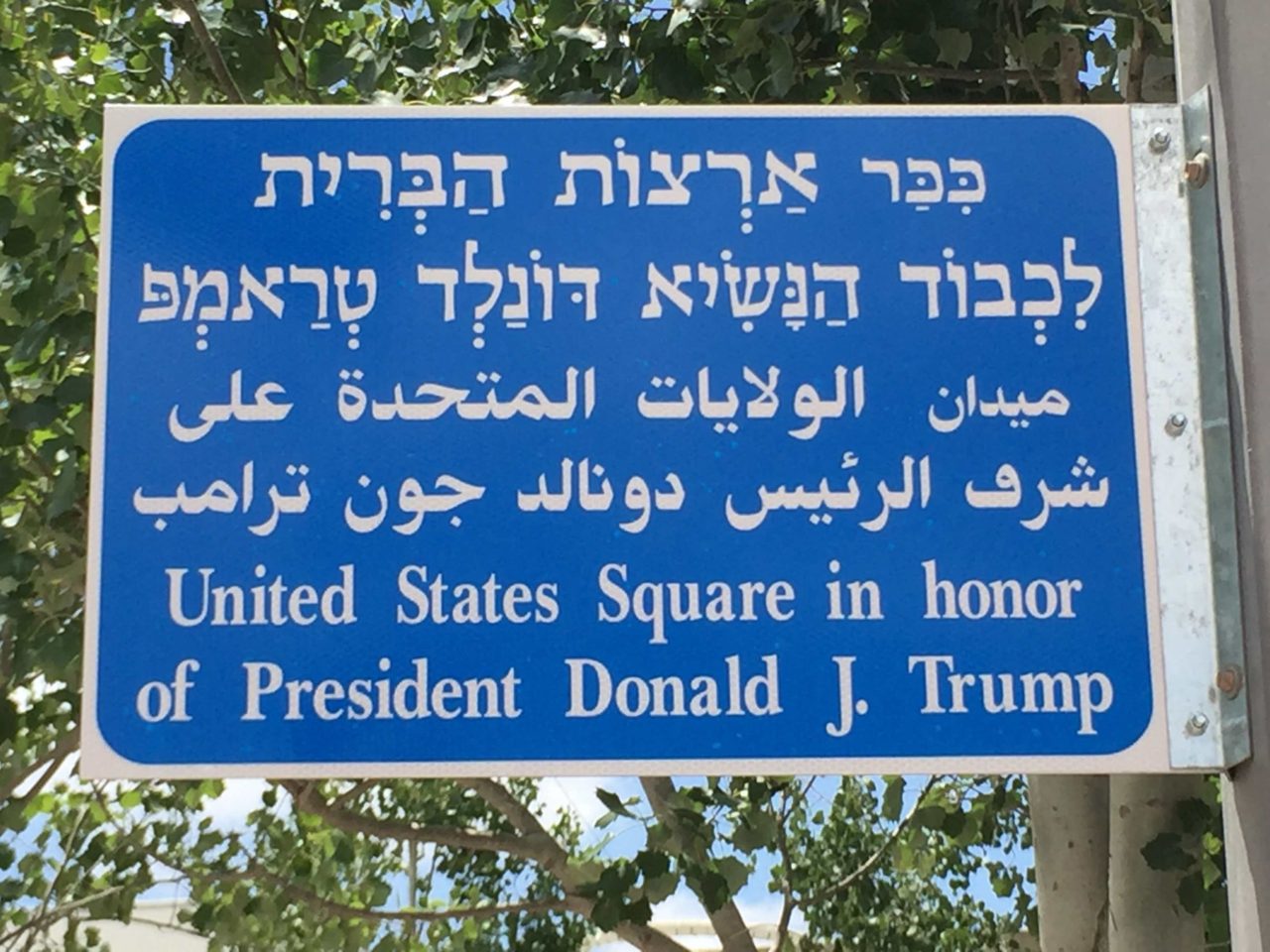 Inside the facility, guests were presented with red and blue commemorative hats, featuring the new seal of the embassy and the date — May 14, 2018, the 70th anniversary of President Harry S. Truman’s decision to recognize the new State of Israel in 1948. 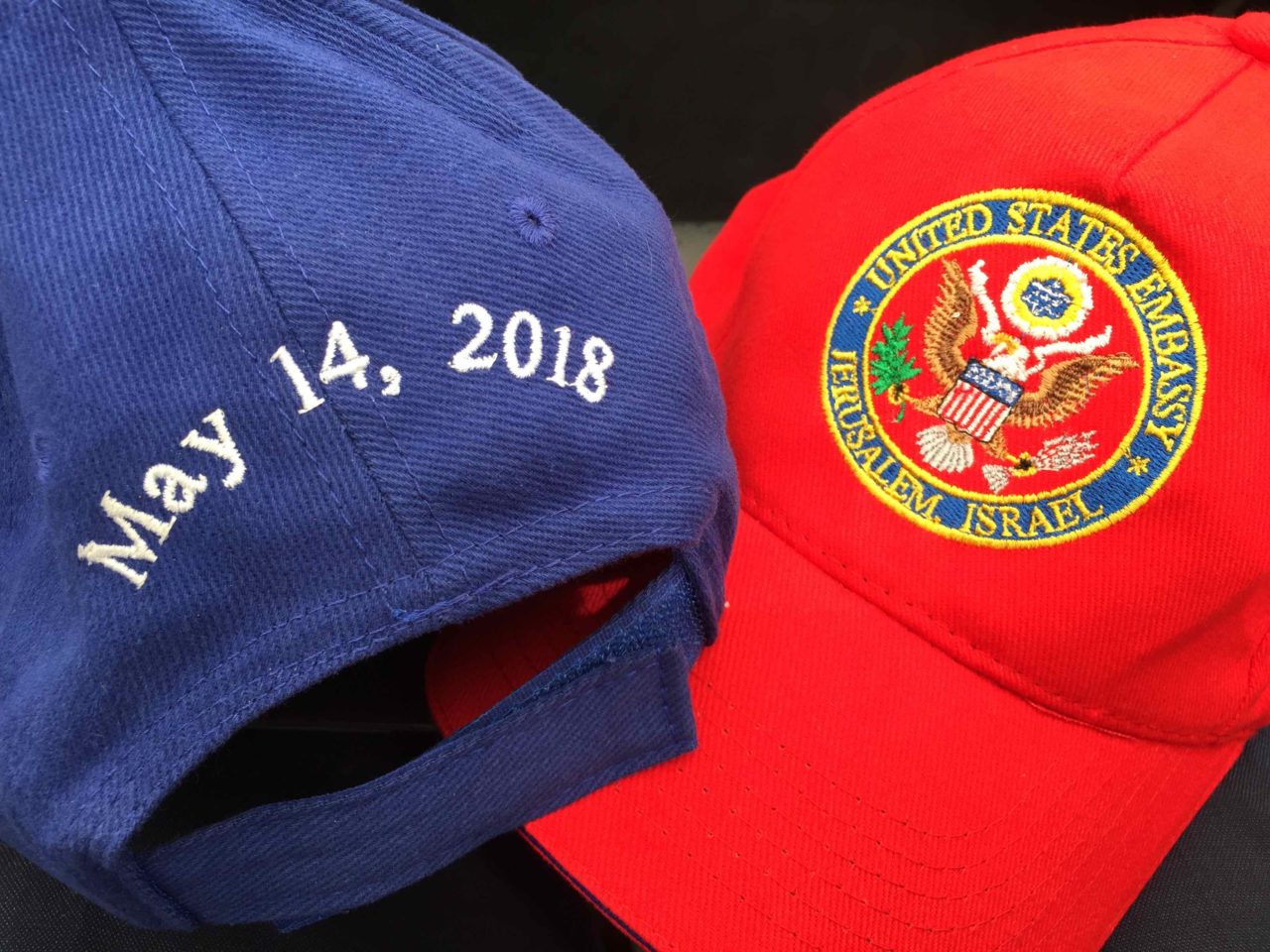 The embassy also posted an enlarged copy of the Jerusalem Embassy Act, the enabling legislation passed by Congress in 1995, and signed by President Bill Clinton, mandating that the embassy be moved to Jerusalem. 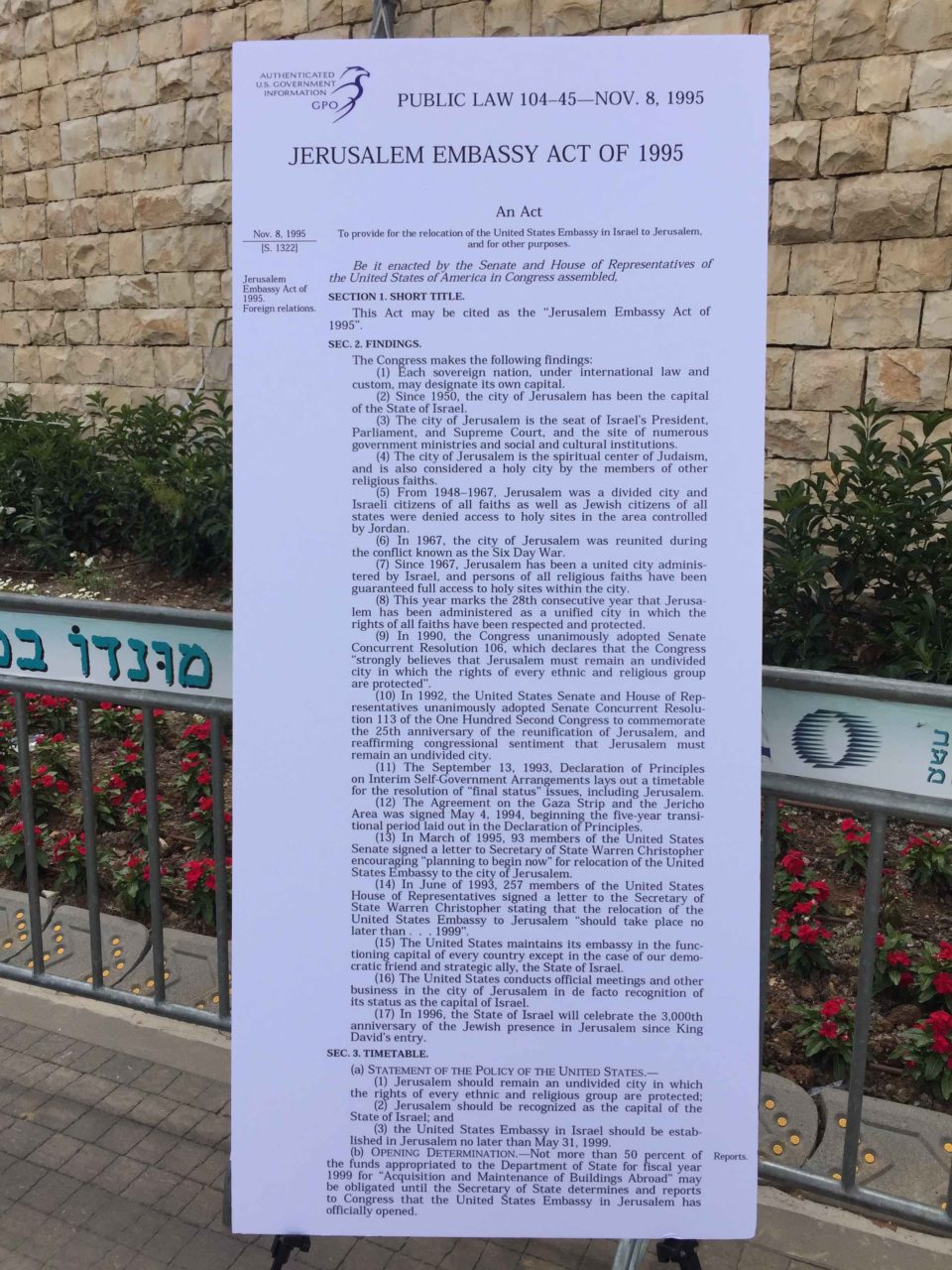 For several hours before the ceremony began, guests greeted each other and made new acquaintances. 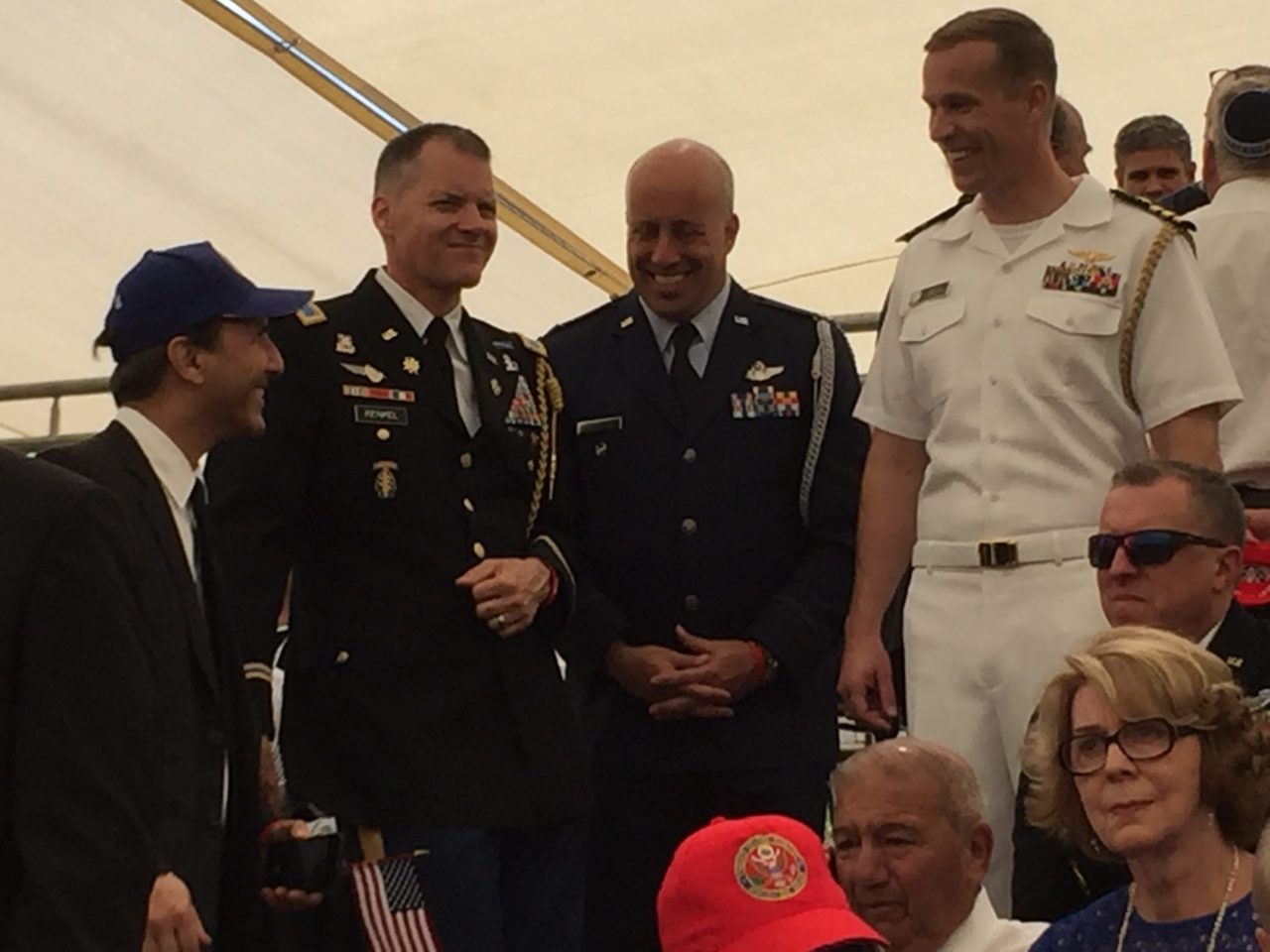 Several groups of Jewish men organized afternoon prayer services in the shade underneath the bleachers where the 800 guests were seated.

The dedication of the embassy officially began with the presentation of colors, the singing of The Star-Spangled Banner, and introductory remarks from U.S. Ambassador David Friedman, who was the master of ceremonies.

“Today, we open the United States Embassy in Jerusalem,” he said.

Opening prayers were delivered by Pastor Robert Jeffress and Rabbi Zalman Wolowick, who both referred to Psalm 122:6: “Pray for the peace of Jerusalem.”

Ethiopian Israeli singer Hagit Yaso — whose parents walked across the Sudan to reach Israel — sang a chilling version of Leonard Cohen’s “Hallelujah,” bringing many in the audience to tears.

Deputy Secretary of State John J. Sullivan took the stage — and as he did so, a ray of light, filtered through the canopy above, struck the seal of the embassy on the podium. 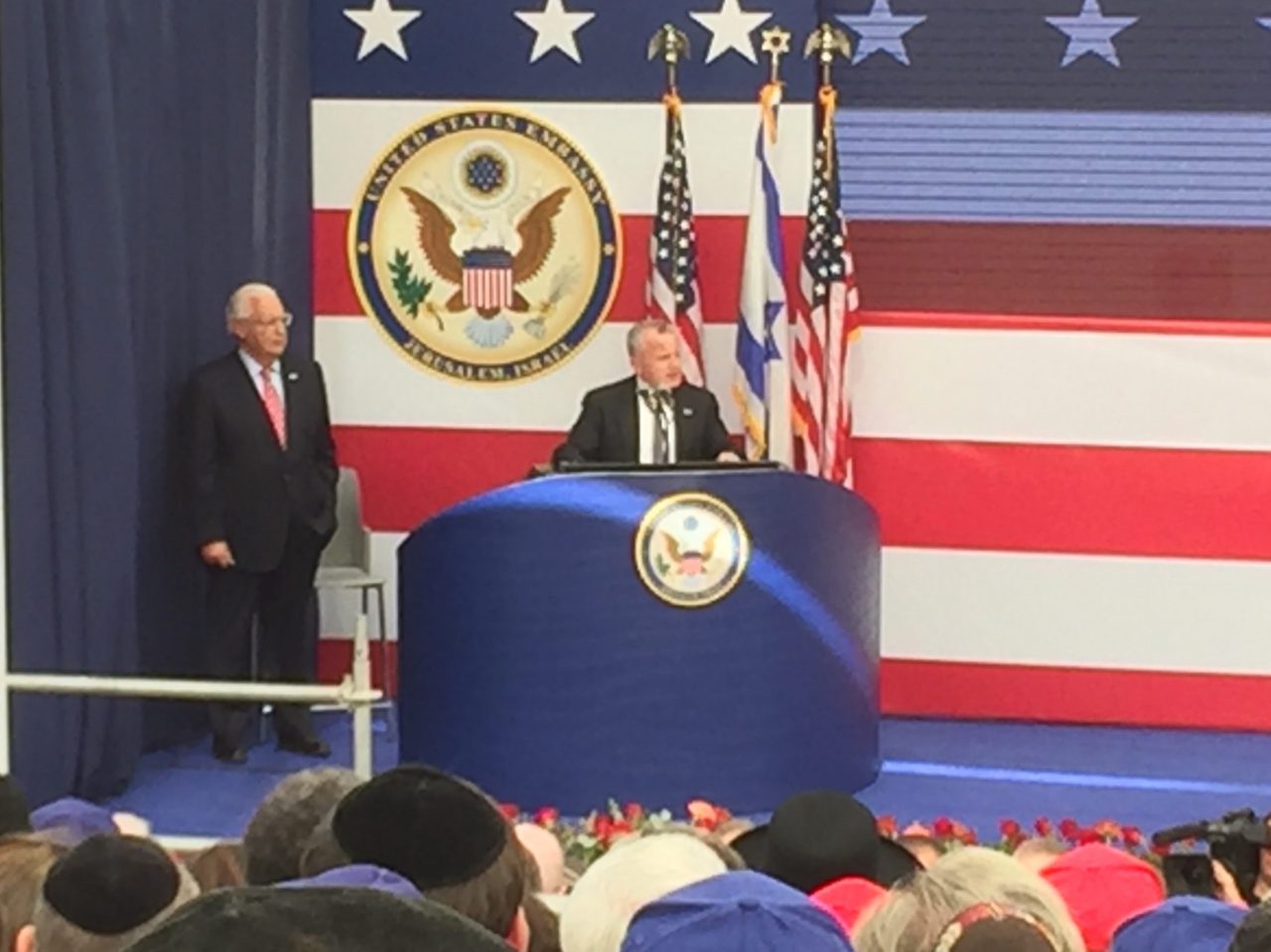 Likewise, when White House advisor — and presidential daughter — Ivanka Trump officially unveiled the seal of the embassy above its entrance, a ray of light struck the Jerusalem stone. 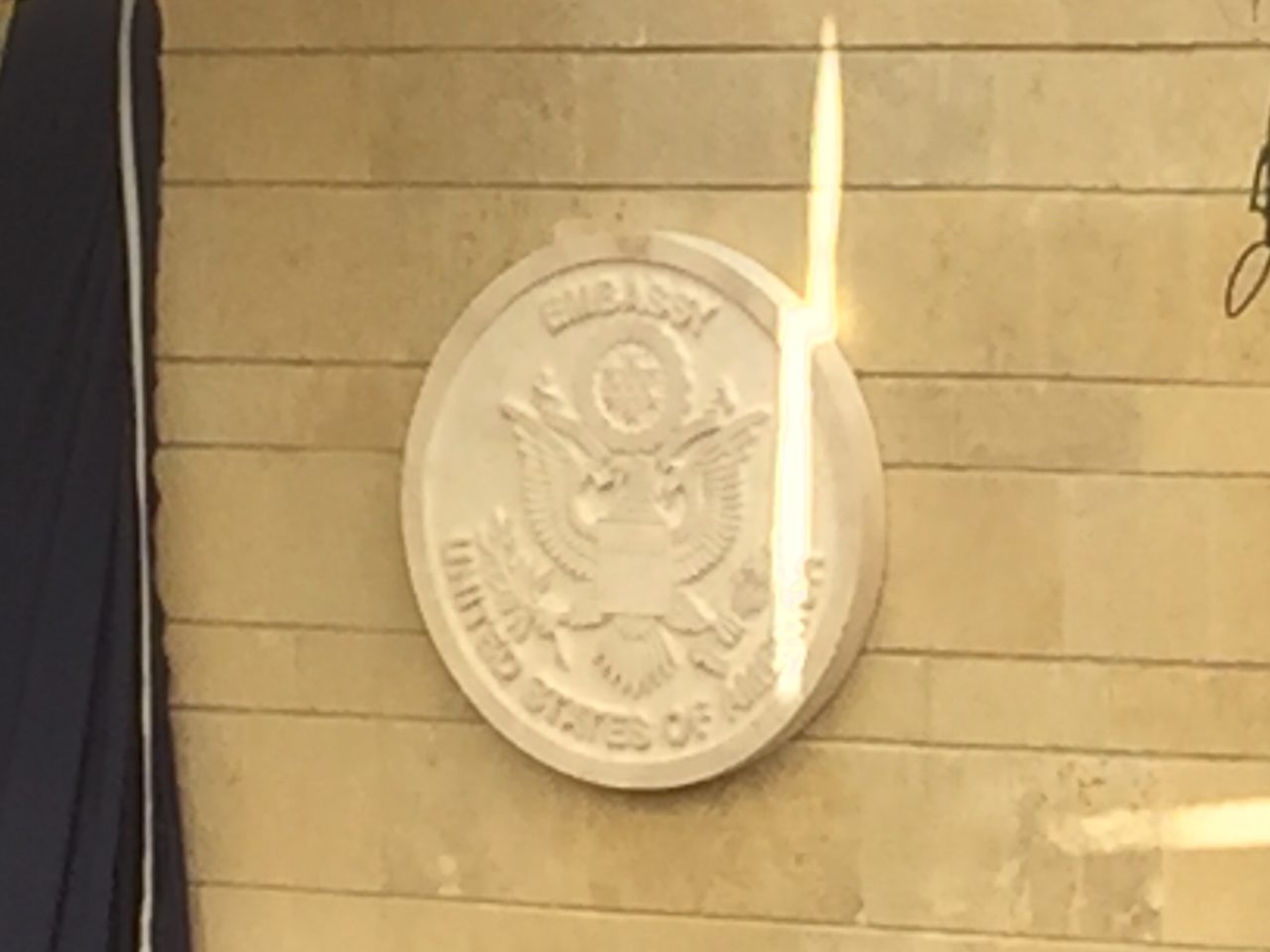 Also speaking were Ivanka Trump’s husband, White House adviser Jared Kushner, who stressed that the U.S. remains committed to negotiations between Israelis and Palestinians. Secretary of the Treasury Steven Mnuchin also spoke — and the audience laughed as Israeli speakers pronounced his name in the Hebrew fashion, with the guttural “ch” sound.

He and other speakers stressed that negotiations and peace would be founded on the basis of reality and truth — specifically, the reality that Israel’s capital is Jerusalem, and the truth that the Jewish connection to Jerusalem is thousands of years old

That would not preclude Palestinian claims on the city, but would ensure that those claims remained realistic.

Netanyahu recalled growing up in the neighborhood as a small boy, and marveled at how far Israel — and the alliance with the United States — had come.

“Thank you, President Trump, for having the courage to keep your promises!” he exclaimed.

Pastor John Hagee, founder and national director of Christians United for Israel (CUFI), closed the meeting with a thunderous prayer that delighted those in attendance — including the many Jewish Americans in the audience, who cheered his benediction.

Hagit Yaso sang once again — this time, offering an English and Hebrew rendition of the popular Israeli song, Od Yavo Shalom Aleinu (“Peace Will Soon Come to Us”). 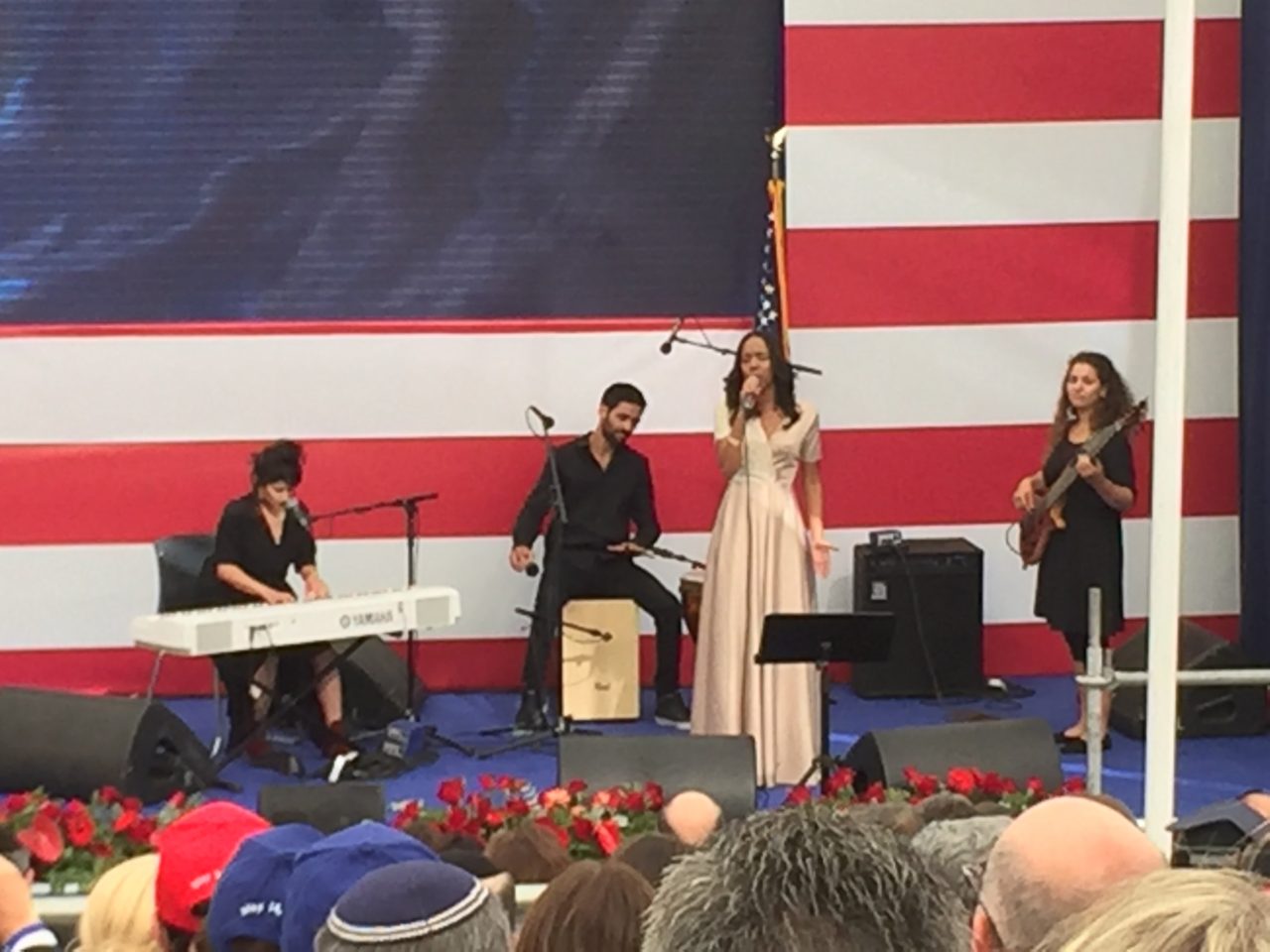 As for the mainstream media controversies of the moment — the Hamas propaganda at the border, the purported outrage over past comments by the religious leaders in attendance — none of that seemed to matter.

The U.S. embassy had opened in Jerusalem, and would remain so forever.