Yeni Safak, one of Turkey’s largest and most belligerent Ottoman imperialist newspapers, boasted a column by its editor-in-chief on its English-language page Sunday morning calling America and Israel the “big bosses of global terrorism.”

While editor-in-chief Ibrahim Karagül often accuses the United States of engaging in jihadist terrorism, the article’s prominent feature on the front page was particularly notable Sunday for standing alongside the news that an American military operation resulted in the death of Abu Bakr al-Baghdadi, the “caliph” of the Islamic State terrorist group.

President Donald Trump announced that al-Baghdadi, responsible for the attempted genocide of multiple ethnic and religious minorities in Iraq and Syria, “died after running into a dead-end tunnel, whimpering and crying and screaming all the way” this weekend. Al-Baghdadi reportedly detonated a suicide vest when facing imminent capture, killing himself and three of his young children.

President Trump thanked the government of Turkey, long accused of aiding Islamic State recruits by not sufficiently protecting its border with Syria, for aiding the operation.

Trump also thanked the government of Russia, now active in the northwest region of Syria where the raid occurred, and the Syrian Democratic Forces (SDF), a majority-Kurdish militia that was largely responsible for the fall of ISIS in Raqqa, its “capital.” Mazloum Abdi, the general commander of the SDF, confirmed on Twitter that it had cooperated with the raid, offering intelligence for five months.

For five months there has been joint intel cooperation on the ground and accurate monitoring, until we achieved a joint operation to kill Abu Bakir al-Bagdadi.

Thanks to everybody who participate in this great mission.@realDonaldTrump#SDF#USArmy #Rojava #Baghdadi

Yeni Safak, which regularly toes the Turkish government line that the SDF is a terrorist organization, carried the news of Trump thanking Turkey, but not the SDF. The newspaper is popular among supporters of President Erdogan and considered close enough to Erdogan’s Islamist Justice and Development Party (AKP) that it often acts as a propaganda wing of the government.

Karagül’s column blaming America and Israel for most of the world’s terrorist activity, dated Friday, remains on the front page of the newspaper on Sunday at press time. 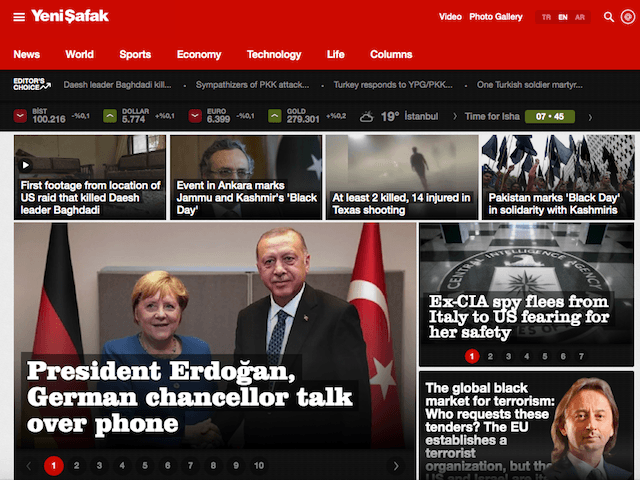 The column – titled “The global black market for terrorism: Who requests these tenders? The EU establishes a terrorist organization, but the US and Israel are its true masters. UAE’s MBZ and Saudi Arabia’s MBS, the two crown princes who are ‘brokers of terror’; it’s game over, your turn will come.” – claimed that the “U.S. and Israel are the big bosses of global terrorism.”

For the United States, Karagül cited America’s ties to the SDF – which he, like the Erdogan government, considers the same entity as the Marxist Kurdistan Workers’ Party (PKK) terrorist groups – which Trump credited in part for the success in neutralizing al-Baghdadi.

The U.S. administration was able to openly declare a terrorist organization, the Kurdistan Workers’ Party (PKK), as its “partner.” And against a NATO ally too. The ethnic terrorism that has been used against our country for the last four decades was actually these countries’ covert war against Turkey.

The buildup in north Syria is the most open and most reckless support ever given to a terrorist organization in world history. The deal struck in Ankara, which ensures the PKK and U.S.’s withdrawal from the area, certified that the U.S. really is a terror boss.

They made a deal with our country for a terrorist organization. Through this deal, we declared to the world their role as a “terror boss.” There is no other greater shame than this for the U.S.

Karagül concluded, without offering any transition in topic, that the crown prince of the United Arab Emirates (UAE) should be “openly held accountable of and charged for being a global terror financier, for assassination and dirty, covert operations.” He added the allegation that Saudi Crown Prince Mohammed bin Salman (MBS) directly ordered the killing of Islamist Washington Post columnist Jamal Khashoggi.

Karagül has not made any public statements at press time regarding the al-Baghdadi raid. He has insisted in the past on claiming that al-Baghdadi was an American asset and that Washington created the Islamic State.

“We have been saying for a long time that Daesh was founded by the U.S. itself. Turkey is the only country that truly fought against Daesh. Daesh is not a terrorist organization, it is an occupation tool,” the editor-in-chief said in 2017. Yeni Safak has also alleged that the CIA evacuated ISIS terrorists from Syria to repurpose them against enemies in the future.