Nearly two-thirds of American Jews (63 percent) feel less safe today than a decade ago, according to a survey released by the Anti-Defamation League Tuesday.

The poll, conducted before the coronavirus outbreak in the U.S., found that more than half of America’s Jewry (54 percent) had witnessed an antisemitic incident in the past five years.

Twenty-seven percent said they had begun making changes to avoid being targeted, including avoiding Jewish identifying markers, refraining from using their last names, covering or not wearing Jewish stars, and not identifying as Jewish on social media.

“Roughly half of those surveyed said they were worried that a person wearing a yarmulke, religious skullcap or other public display of Judaism would be physically assaulted or verbally harassed on the street or in a public place,” the survey said.

“Our tracking has shown that lethal and nonlethal ant-Semitic attacks have been on the rise in recent years, and now we’ve also found that American Jews are deeply concerned for their personal safety and their families’ and communities’ security in a way that they haven’t been in more than a decade,” said ADL head Jonathan Greenblatt.

“It is a sad state of affairs that in the face of widespread anxiety about anti-Semitic attacks, some Jewish Americans are modifying their routines and avoiding public displays of Judaism to minimize the risk of being targeted,” he said.

Greenblatt added that the coronavirus pandemic has only heightened antisemitic expression.

“We recognize the reality on the ground has changed dramatically for Jewish communities, as it has for all communities, in recent months,” he said, adding that the ADL would continue monitoring antisemitism “in the current environment and its impact on the Jewish community.” 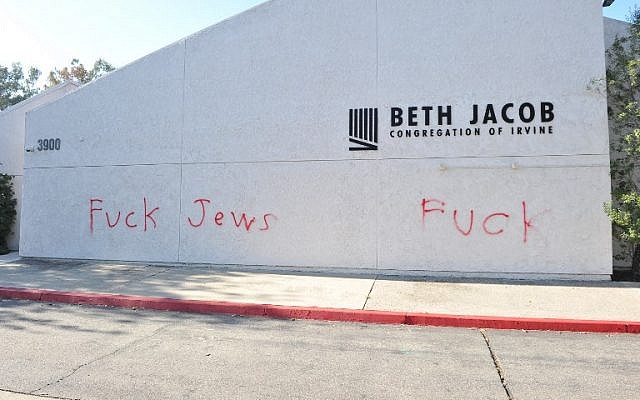 The survey, conducted by YouGov and released on Israel’s Holocaust Remembrance Day, queried 538 Jewish Americans aged 18 and over.

According to the poll, 49 percent said they had heard antisemitic comments, slurs or threats targeting others, while 21 percent said they had personally experienced the same. A similar percentage of respondents answered that they were affiliated with a Jewish institution that had been vandalized, damaged, or defaced.

There were several deadly antisemitic attacks in the U.S. in 2019, including the April 27 shooting at the Chabad of Poway, a shooting spree at a kosher supermarket in New Jersey on December 10, and a stabbing during a Hanukkah celebration in Monsey, New York, that same month.

Tel Aviv University’s Kantor Center for the Study of Contemporary European Jewry also released its annual report on global antisemitism ahead of Holocaust Remembrance Day. The report cited an 18 percent jump in antisemitic incidents in 2019 from the previous year, with 456 attacks against synagogues, community centers, and other Jewish targets around the world.

The researchers said the hatred resurfacing amid the global pandemic in 2020 reignited an ancient form of antisemitism that blames Jews when “things go wrong.”

The report gave examples of antisemitic incidents relating to COVID-19 including the conspiracy theory that the virus was the result of the Jews’ rejection of Christ and that Jews spread it in order to profit from vaccines.