Saudi Arabian officials contradicted President Joe Biden on more than one occasion during his visit to the Gulf kingdom, the first time was with regards to oil production while the second involved a potential normalization agreement with Israel brokered by Washington — essentially undercutting the two primary goals for the trip.

Saudi Arabia’s Crown Prince Mohammed bin Salman on Saturday cast doubt on Biden’s promise to boost oil production and bring down prices, saying his country had almost reached its capacity and could increase production only nominally to 13 million barrels per day.

“After that the kingdom will not have any more capability to increase production,” said the de factor ruler, known as MBS.

Even that number is only expected to be reached by 2027. 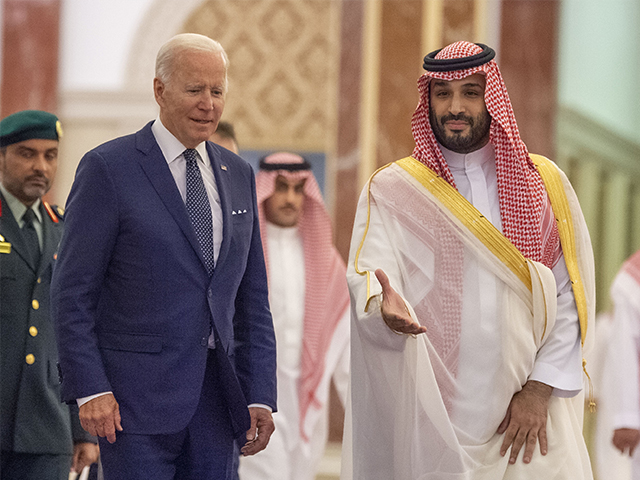 “Adopting unrealistic policies to reduce emissions by excluding main sources of energy will lead in coming years to unprecedented inflation and an increase in energy prices and rising unemployment and a worsening of serious social and security problems,” he said.

Later in the day, Saudi Foreign Minister Prince Faisal bin Farhan said Riyadh’s decision to open its skies for all flight carriers had “nothing to do with diplomatic ties with Israel” and was “not in any way precursor to any further steps” towards a normalization deal.

His words were in stark contrast to Biden’s assertion a day earlier, when the American president said: “This is the first tangible step on the path of what I hope will eventually be a broader normalization of relations” between Israel and Saudi Arabia.

Riyadh has also not yet agreed to allow direct flights between Israel and Saudi Arabia for Israeli-Muslim pilgrims, contradicting another promise by the Biden administration.

In a further demonstration of the distance between the two allies, Prince Faisal said, “there was no discussion about a GCC-Israeli defense alliance or anything of the sort” at the Jeddah summit.

Washington has for several months extolled an air defense alliance between Gulf states and Israel – a kind of Middle East NATO to counter Iran — but the Saudi foreign minister’s remarks seem to make it clear that that is little more than a pipe dream.

True to form, the fist-bumping president didn’t miss an opportunity to make another verbal gaffe, just as he did a day earlier in Israel.

Biden spoke of the “selfishness” of American troops serving in the Middle East before correcting himself and saying, “selflessness.”