Business donors’ demands for mass immigration have cost the GOP five states in presidential elections and 11 House seats in congressional elections, according to a new study by pro-immigration economists.

“In House elections, 11 congressional districts and 5 states in presidential elections switched to a Democrat majority” between 1990 and 2010, says the April 2018 study, titled “The Political Impact of Immigration.”

“No state and no congressional district switched from a Democrat majority to a Republican majority as a consequence of immigration,” said the report, authored by pro-migration economist Giovanni Peri, Anna Maria Mayda, a Georgetown University professor now at the U.S. State Department, and Walter Steingress, an economist at the Bank of Canada.

“If the study’s results are correct, it is very difficult to imagine the Republican Party will remain viable nationally if immigration continues at the current level,” said Steve Camarota, research director at the Center for Immigration Studies. Currently, the federal government welcomes one legal immigrant for every four Americans who turn 18 as it tries to spur business activity via mass immigration.

The study comes out as business lobbyists use a group of almost 25 GOP legislators to push GOP leaders in the House towards another huge no-strings amnesty for more than 2 million young ‘DACA’ illegals.

The GOP leaders — led by House Speaker Paul Ryan — are signaling their support for the amnesty and their opposition to an immigration compromise developed by Rep. Bob Goodlatte. Very few of the ‘DACA’ migrants are likely to vote Republican, and they are likely to bring in several million additional chain-migration relatives to vote for Democratic Party candidates by 2040. But Ryan has long been an advocate of greater immigration and he opposed the 1994 effort to curb illegal immigration in California via Prop. 187. California was once dominated by the middle-class voters, but is now dominated by a high/low alliance of wealthy progressive leaders and many low-wage voters, leaving the GOP powerless.

The study also argues that high-skill migrants — including the roughly 1.5 million white-collar guest-workers in the United States — push GOP-leaning college graduates to vote for the Democratic Party. The GOP’s loss of college-grad votes exceeds the GOP’s gain in blue-collar voters, says the report:

The first is Gwinnet County in Georgia, which saw its share of immigrants increase by 26 percentage points over 20 years. Immigration was mainly high-skilled (two-thirds of immigrants were high-skilled). In addition, the native population in 1980 was rather skilled. The county is part of a commuting zone that ranks at the 26th percentile of the unskilled-to-skilled distribution of natives in 1980.16 According to the coefficients in Table 7, column 1, the implied decrease in the Republican vote share is 10.2 percentage points … 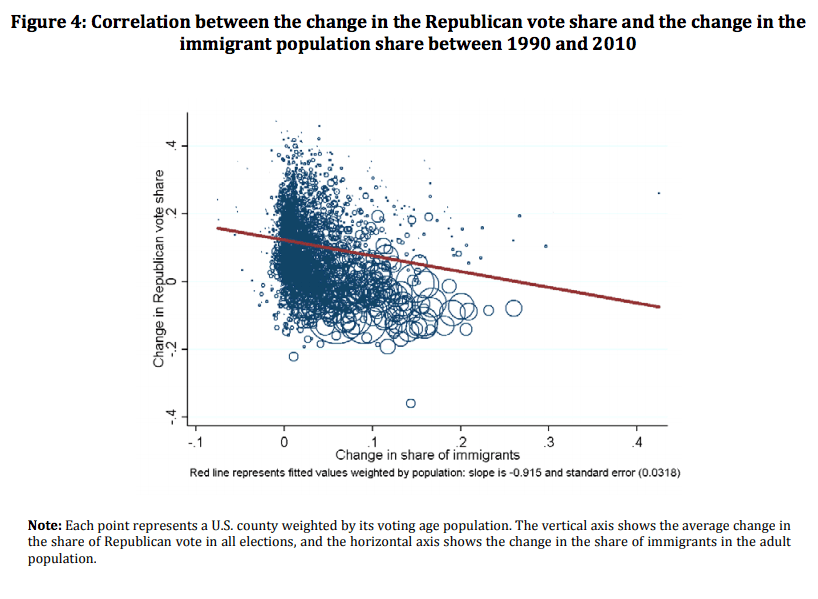 The immigration patterns have also polarized the United States by geography, the report says:

It increased political polarization in the United States. Large urban areas, already exhibiting a Democratic majority, are those where the pro-Democrat effect of immigrants was stronger, but those counties were already leaning Democrat before. Similarly, the effect of new immigrants increased the Republican vote share in some less-urban and low-skilled counties that already exhibited a Republican majority in 1990.

His deputies are planning to reform of the H-1B program, which has ceded a huge slice of the U.S. information-technology sector to lower-wage guest-workers and immigrants from India. The program — which now keeps a population of at least 460,000 non-immigrant foreign graduates in U.S. professional jobs — would be reformed and shrunk by narrowing the law’s definition of “specialty occupations,” according to the deputies’ planning document provided to Breitbart News.

Unlike prior GOP leaders, Trump has periodically blasted and praised the H-1B program. In March 2016, f0r example, Trump issued a statement saying:

The H-1B program is neither high-skilled nor immigration: these are temporary foreign workers, imported from abroad, for the explicit purpose of substituting for American workers at lower pay. I remain totally committed to eliminating rampant, widespread H-1B abuse and ending outrageous practices such as those that occurred at Disney in Florida when Americans were forced to train their foreign replacements. I will end forever the use of the H-1B as a cheap labor program, and institute an absolute requirement to hire American workers first for every visa and immigration program. No exceptions.

If Trump promotes the planned H-1B reform, he would be effectively promising to raise salaries for white-collar voters, giving college-graduate Americans a pocketbook incentive to vote against the Democrats’ policy of encouraging immigration.

Amid the economic boom, white-collar wages have remained almost flat, according to Korn Ferry, a recruitment agency. The agency reported May 14 that:

while the job market is at the hottest it’s been this century, salaries for newly minted college graduates are virtually flat [in 2018] from 2017.

But Trump only “flirts with” urging CEOs to raise white-collar and blue-collar wages, said Camarota. “For reasons that make no sense to me, he can’t bring himself to say ‘Higher wages and a tight labor market are my goal.'”

Polls suggest the H-1B program is very unpopular. An August 2017 poll reported that 68 percent of Americans oppose companies’ use of H-1Bs to outsource U.S.-based jobs that could be held by Americans.