Increased oversight by President Donald Trump’s officials has trimmed the immigration spike created by former President Barack Obama during 2016 and 2017, according to the Washington Post.

The number of people receiving visas to move permanently to the United States is on pace to drop 12 percent in President Trump’s first two years in office, according to a Washington Post analysis of State Department data. …

The shift in legal immigration is a reversal of the trend under President Barack Obama. During Obama’s time in office, immigrant visas increased by 33 percent, surging to 617,752 in fiscal 2016, the highest level in decades.

The Post noted that the legal immigration from Muslim countries is “on track to fall by nearly a third,” and it also cited criticism that the reduction “is really a Make America White Again agenda.”

Administration officials told the Post that Trump’s policy is designed to help American workers and to upgrade security checks:

But Trump’s deputies are still approving more immigrant visas than were approved during the first six years of Obama’s tenure, the Post notes. 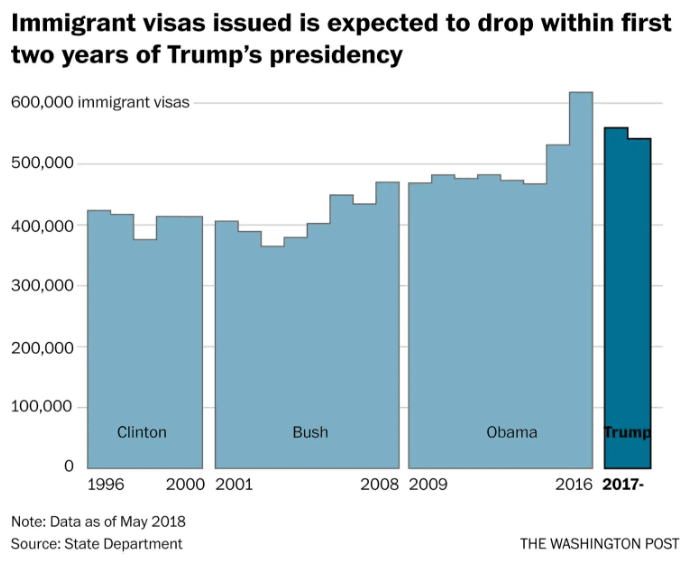 The Post analysis only looks at about half the annual inflow into the United States.

The visa count examined by the Post only includes people arriving as family chain-migrants sponsored by prior immigrants, diversity visa-lottery arrivals, some foreign workers, and “special immigrants.” But many additional foreigners arrive in the United States via other methods and later “adjust status” from a visitor, temporary worker or even an illegal to become a legal resident.

The combination of both inflows ensured “approximately 1.13 million aliens obtained Lawful Permanent Resident (LPR) status in Fiscal Year (FY) 2017, compared to 1.18 million in FY 2016,” according to the Department of Homeland Security.

That is a huge number. In comparison, roughly 4 million Americans turn 18 each year, so the federal government is importing roughly one new immigrant for every four new American adults.

After five years of legal residency in the United States, legal residents can apply for citizenship. According to the DHS:

More data can be found here.

Trump’s immigration reform plan would further cut immigration levels by ending the inflow from diversity visas, some chain-migration categories and asylum requests. That agenda is being blocked by Democrats and some GOP legislators in Congress. But Trump has used his legal authority to curb illegal immigration over the Mexican border and sharply lowered the inflow of legal immigration via the refugee agencies. He has also blocked a business push in Congress for another amnesty of ‘dreamers’ and other illegals.

Pro-migration groups say the current inflow is too small and too slow. The expanded oversight in the Trump administration is a “second wall,” claimed a pro-migration advocacy group, the National Partnership for New Americans:

In just the last two years, a record setting 1,957,384 immigrants in the U.S. have applied to naturalize and become U.S. citizens. However, in the same period, the backlog of lawful permanent residents waiting for their citizenship applications to be processed increased from 367,009 to 734,209, a shocking 100.05% increase in the number of pending applications in two years. The exploding citizenship backlogs of the Trump administration have become a “Second Wall” that prevents lawful permanent residents from becoming voting U.S. citizens.

In response to the increasing backlog, NPNA and our partners in the Naturalize NOW Campaign are launching a national campaign, in conjunction with the release of this report update, to reduce the backlog and the waiting time for USCIS to process applications to six months, consistent with past practice, and to encourage naturalization for the millions of eligible [Lawful Permanent Residents].

Democrats want more immigrants because they expect the immigrants will vote for big-government progressive policies. Business groups — including those with close ties to the GOP — want more immigration because it helps investors by cutting wages, boosting consumption, and spiking real-estate prices. In practice, the federal government’s immigration policy inflates the supply of labor — and so reduces the cost of labor — to help boost company sales and investors’ returns.

The Washington Post echoed those the business demands for more imported consumers and more wage-cutting workers:

Trump’s economic argument against immigration comes as the unemployment rate has fallen to 3.8 percent, the lowest level in nearly two decades. Some American businesses are clamoring for workers, and the slowing of legal immigration could further strain a job market in which a record 6.6 million positions are unfilled.

That cheap-labor economic strategy has stalled wage-growth since the 1960s: