GOP candidates are doing better than expected by pollsters in districts with large Latino populations, says a report in National Journal.

Democrats counting on President Trump’s hard-line immigration policies to spark energized Hispanic turnout and a wave against GOP candidates in this year’s midterms will be surprised to see what’s transpiring. Even during the heat of the family-separation crisis, Democrats are underperforming in heavily Hispanic constituencies, from GOP-held border battlegrounds in Texas to diversifying districts in Southern California to the nation’s most populous Senate battleground in Florida.

The National Journal article was posted just before the Bureau of Labor Statistics showed unemployment among Latinos had reached a record low of 4.6 percent. Wages are also rising for many people in blue-collar jobs because of President Donald Trump’s “Hire American” economic strategy, which also blocked a June push for a wage-cutting amnesty by business-first Republicans.

The greater danger facing GOP candidates is posed by women in well-off suburbs, the magazine explained. For example, Rep. Will Hurd of Texas represents a district along the border where Latinos comprise 7-out-10 in the local population, but:

He’s in surprisingly good shape as he vies for a third term against Democrat Gina Ortiz Jones. Despite holding one of the 25 GOP seats that Clinton carried, he’s not on the list of The Cook Political Report’s most endangered 31 members. His Texas colleagues John Culberson and Pete Sessions, representing suburban Houston and Dallas districts where Republicans traditionally dominate, are in deeper trouble. It’s a crystal-clear sign that the anti-Trump anger is concentrated within whiter, affluent suburban communities, not the Hispanic battlegrounds with the most at stake.

The situation among Latino voters is similar in the West Coast and in Florida, the magazine says.

Down in South Florida, one of the few Republicans to represent a majority-Hispanic district is also showing his resilience. In a recent Democratic survey conducted in his district, Rep. Carlos Curbelo sported a solid 42-27 favorability score, with 48 percent of voters approving of Trump’s job performance. Clinton won this district by 16 points, so if anything, these results suggest Trump has gained ground with the district’s substantial Cuban-American community since becoming president.

In May and June, Hurd and Curbelo got a lot of favorable coverage from the pro-amnesty media because of their campaign for passage of an amnesty via the discharge-petition process. Their push was defeated when Democrats refused to compromise and blocked a bill on June 21.

Latinos’ concern about immigration is spotlighted by the left-leaning establishment media, but many polls show that most Latinos prioritize typical concerns about jobs, wages, families, crime and healthcare. For example, most Latinos are most concerned about the economy, healthcare, and crime, not immigration, according to a recent poll of Latino adults by Reuters: 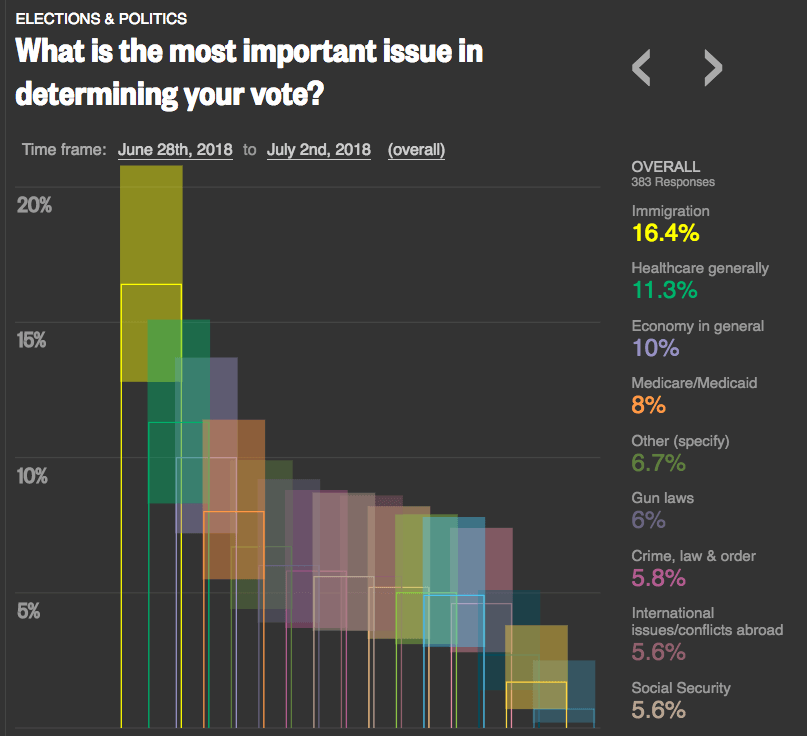 National Journal argues that the Democrats’ campaign aimed at Trump’s immigration policies is having the biggest impact on suburban, well-off women voters.

But a Rasmussen poll taken near the same time shows a modest sex difference once the broad question is narrowed to specific issues: 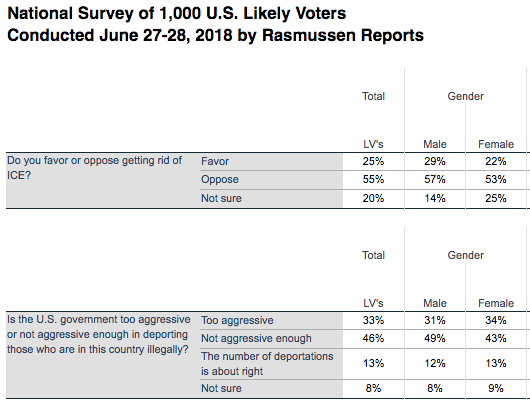