The UN is now hosting in the public entrance hall of its New York headquarters a Palestinian exhibit which includes pieces that artfully depict all of Israel as Palestine. The display goes hand-in-hand with the logo featured at the top of the cover page of the speech that Palestinian leader Mahmoud Abbas’ delivered to the General Assembly on November 29, 2012. That emblem continues to promote a one state solution, Palestine without Israel.

On November 29th the General Assembly granted “Palestine” the status of “non-member observer state” under the pretense that the move brought the world closer to a two-state solution. But that same evening Palestinian UN representative Riyadh Mansour opened an exhibit entitled “Palestine – Memories Dreams Perseverance.”  The political message is not subtle, with the works bearing titles such as “homeless,” “delirious in exile,” and “to Jerusalem we travel.”

The emblems of a long list of Palestinian terrorist organizations include the familiar shape in which Israel, the Gaza Strip and the West Bank are all combined into the only and only Palestine.

Popular Front for the Liberation of Palestine – General Command

And here is the front page of Mahmoud Abbas’s speech, speaking to the UN last month as the “President of the State of Palestine”: 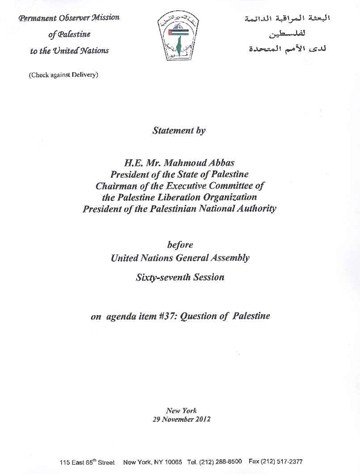 Here is a close-up of the logo on the cover page of Abbas’s speech:

It’s a perfect fit with the message now embedded in the UN public exhibit. Here is “A Standing Prayer” by Manal Deeb: 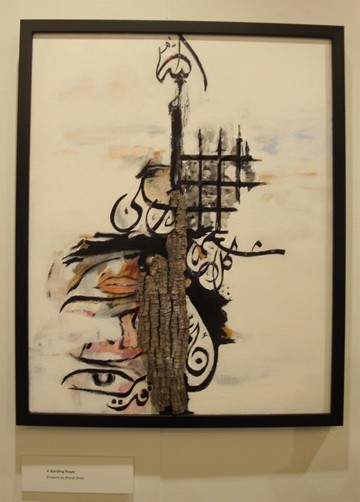 The exhibit also includes Deeb’s “Memories of Trees” (a series with similar images): 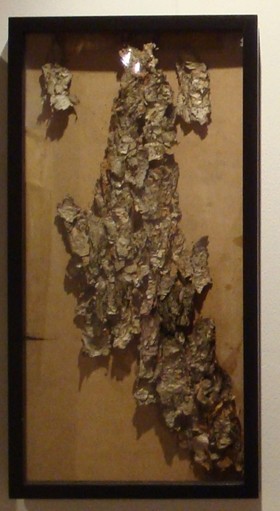 Whether “art” or “emblem” or the words of Abbas himself — who told the General Assembly that the creation of Israel, the so-called “Al-Nakba of 1948,” “was “one of the most dreadful campaigns of ethnic cleansing and dispossession in modern history” — the Palestinian-UN agenda is hidden in plain sight.