The Islamic State of Iraq and al-Sham (ISIS), the group that overran Mosul in Iraq last week and has been pushing south towards Baghdad, announced it is also preparing an offensive in northern Syria.

In a statement dated June 17, 2014, and published on several Arabic websites, ISIS called on its fighters to attack the city of Al-Qamishli and its rural areas.  In the last several hours a number of bombings have been reported on Twitter and some reports say the airport of Qamishli has been heavily damaged. 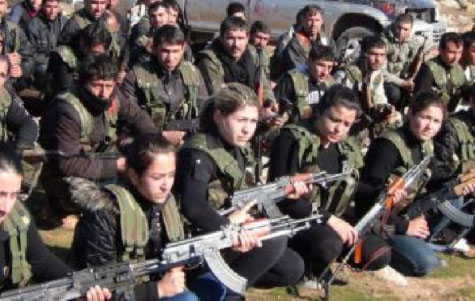 As Michael Rubin reported in February in The Wall Street Journal, Christians, Kurds and Arabs have been conducting a quiet experiment in self-rule in this region of northeast Syria.  The region was left largely undefended as President Assad’s forces were drawn to clashes further west, so residents came together to keep day-to-day life running smoothly. Popular Protection Units (YPG), a kind of people’s militia, have been keeping the Islamists at bay.  While predominantly Kurdish, the YPG also have been joined by Arabs and Syrian Christians.  In early May, the YPG fought alongside the Free Syrian Army in clashes with ISIS forces in Raqqa province.  And unlike the ISIS fighters, who prefer their women fully veiled, the YPG have men and women fighting alongside each other.

The ISIS statement of June 17 says the following:

The sharia court of ISIS issued a Fatwa proclaiming Al-Qamishli and its rural area as the rightful property of ISIS. The ISIS statement proclaims that after seeking God, jihadists should do the following: 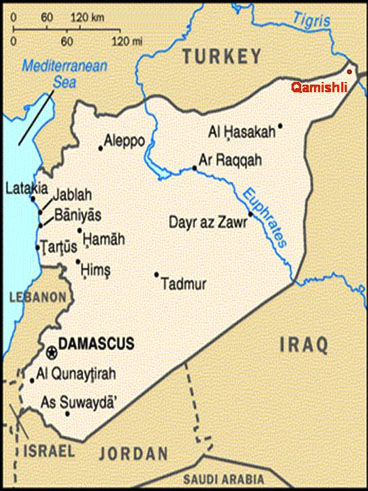 1.  Burn and bring down all houses of entertainment in Al-Qamishli.

3. Take full control of the famed “Jewelry market” of Al-Qamishli, and all silver and gold in the market is to be taken by the ISIS fighters because it is rightfully theirs.

4. Take full control of all food and clothing stores in order to give it to their brother jihadist fighters.

5.  Empty the city of all Christians: Take their women; they are yours, and behead the Christian men. Empty the city of all Kurds, who are the grandchildren of deceivers; take out from the city the family of al Khaznawi and kill them all.  (Sheikh Khaznawi was a Kurdish cleric in Qamishli who was assassinated in June 2005.)  With the statement ISIS issued to its fighting units a map of Al-Hasaka, Al-Qamishli and other suburbs, where the above five tasks are to be carried out “according to the command of Allah.”

Some commentators have said that neither the Assad regime nor the Kurds fear an ISIS advance on Qamishli.  But after their surprise conquest of Mosul, perhaps previous assessments of ISIS’s strength and boldness should be reconsidered.

Katie Gorka is the president of the Council on Global Security.