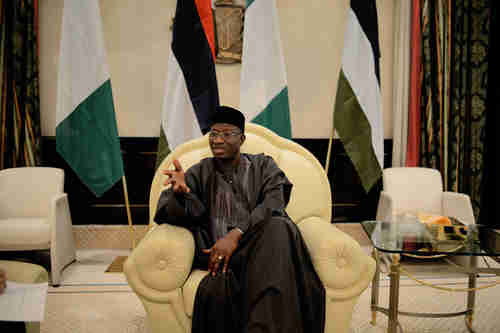 Nigeria’s president Goodluck Jonathan on Friday said in an interview that he wants the U.S. to help Nigeria fight Boko Haram. In the past, Jonathan has rejected the idea of foreign troops on Nigeria’s soil, but now he noted that U.S. troops are fighting the Islamic State of Iraq and Syria (IS or ISIS or ISIL) and has apparently has changed his mind:

Are they not fighting ISIS? Why can’t they come to Nigeria? They are our friends. If Nigeria has a problem, then I expect the US to come and assist us.

However, Pentagon spokesman Rear-Admiral John Kirby said, “I can tell you that there are no plans as I speak here to send unilaterally– to send or to add US troops into Nigeria. There are no US troops operating in Nigeria.”

This reminds me of the situation involving the Darfur war during the George Bush administration. In 2004, “peace activist” Jesse Jackson condemned President Bush for sending troops to the Iraq war, but called on Bush to lead a worldwide effort to send troops to Darfur. He said, “If we can have troops in Korea, in Nato, there should be nothing shameful about defending life in Africa.”

In 2007, then-Senator Joe Biden criticized President Bush continuing to be involved in Iraq, but for not getting involved Darfur:

The conduct of this [Iraq] war has so badly damaged our readiness; the conduct of this war and the blood and resources we’ve had to expend has limited our credibility around the world, and limited our flexibility in terms of the use of force. Here we are – we could end the carnage in Darfur tomorrow.

This statement came shortly after he demanded that American troops be sent to Darfur:

Other “peace activists” at the time were more explicit in saying that President Bush was willing to send troops to help white people, but not to send black people in Africa. Susan Rice, the current National Security Advisor, was particularly vocal in demands to send troops to Darfur.

Following the capture and murder of the Jordanian pilot by the Islamic State (IS or ISIS or ISIL), the Arab nations that were announced to be part of the US administration’s anti-ISIS coalition have been dropping out. Saudi Arabia, Qatar and Kuwait have dropped out of the coalition completely. There is absolutely no chance that Egypt will join the coalition, as had originally been hoped. United Arab Emirates (UAE) has partially remained in the coalition.

The latest edition of Debka’s subscriber-only newsletter (sent to me by a subscriber), contains a detailed analysis of the US anti-ISIS strategy, based on its own intelligence sources. I like to reference Debka’s newsletter because it contains valuable insights into what is going on, but is written from Israel’s point of view, and sometimes gets things wrong.

According to the analysis, Obama is taking every step possible to avoid being drawn into another Iraq war. While he is criticized for having no strategy, he actually does have a strategy: to “dump that war in Iran’s lap” by using the nuclear weapons talks to draw Iran into fighting ISIS instead of us.

Here is an outline of the analysis:

Long-time readers are aware that ten years ago I wrote, based on a Generational Dynamics analysis, that Iran would become America’s ally as the generation of survivors of Iran’s 1979 Great Islamic Revolution died off, and that Pakistan and Saudi Arabia would be allied with China against us. Ten years ago, that prediction seemed insane. So it has been fascinating and astonishing, in the last two years, to see that prediction come closer to reality every week.

This is a good time to repeat something I have written about several times. There is no doubt in my mind that Iran will develop nuclear weapons. Iran was attacked with weapons of mass destruction (WMDs) in 1988 by Iraq, and Iran would already have developed nuclear weapons if Saddam Hussein had not been expelled by the Iraq war in 2003. Iran sees itself surrounded by potential enemies, Pakistan and Israel, both having nuclear weapons. For Iran, developing nuclear weapons is an existential issue.

However, as I have described before, Iran takes an enormous amount of pride in not having invaded other countries, even though other countries have invaded Iran. If you look back at Iran’s major wars of the last century — the Constitutional Revolution of 1908-09, the Great Islamic Revolution of 1979, and the Iran/Iraq war of the 1980s– Iran never attacked anyone else. This is now part of Iran’s DNA, and even the top leadership would be repulsed by the idea of a preemptive attack on Israel.

So my conclusion is that Iran will develop nuclear weapons as a defensive measure, but has no plans at all to use them on Israel, which is what is widely believed. Guardian (London) and Debka