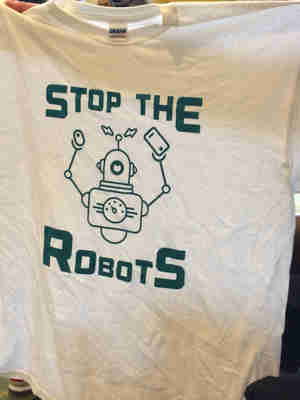 Chanting things like “You say robot, I say no-bot!” and “Humans are the future!”, anti-robot activists protested against robots at the South by Southwest (SXSW) conference in Austin, Texas last week.

The protesters expressed concern that robots would take over people’s jobs, and other dangers associated with uncontrolled growth and development around artificial intelligence and robotics. However, they insist that they do not want to stop the progress of technology.

The protesters referred to statements by Stephen Hawking and Tesla founder Elon Musk warning about the danger of a dark future with intelligent robots.

What the protesters are talking about is the Singularity, the point in time when computers will be more intelligent and more creative than humans. At that point there will be a sharp bend in the technology curve, since super-intelligent computers will be able to develop new technologies exponentially faster than humans, including technologies to make themselves faster. After that, they will essentially be running the world.

Yemen’s Iran-back ethnic Houthis, who have been in control of the capital city Sanaa since late last year, have ordered for a “general mobilization,” through a statement from their Supreme Revolutionary Committee. The call was for land, marine and air forces to confront and eradicate terrorism, referring to the double suicide bombing that killed 137 people during Friday prayers at two Shia mosques in Sanaa. However, it is believed that the real target of the mobilization is Abdu Rabu Mansour Hadi, the internationally recognized president of Yemen, who fled last month from Sanaa to the southern city of Aden, where he’s being supported by Sunni tribes.

It is believed that the general mobilization means that Houthi forces, combined with militias loyal to former Shia president Ali Abdullah Saleh, will deploy to the south to attack Hadi and his forces. There have already been air strikes in Aden ordered by the Houthis, who have taken control of the air force. However, there have been reports that the pilots of the warplanes dumped their bombs into the water, indicating that they are not loyal to the Houthis.

Another possible complication is the presence of two Sunni terrorist groups, the Islamic State (IS or ISIS or ISIL or Daesh) and Al-Qaeda in the Arabian Peninsula (AQAP). There have been reports of them fighting each other, and there have been other reports of them cooperating to target Houthis.

There is also a group of militias known as the “Southern Secessionist Movement” that are advocating splitting Yemen into two countries, South Yemen and North Yemen, as was the case prior to 1990. These militias are reported to be fighting alongside AQAP and/or alongside Hadi’s supporters against the Houthis.

Fears are growing for a wider civil war in Yemen very soon. As I have been reporting, there is already a large, growing war of Muslims versus Muslims in northern Africa, the Mideast, and south Asia, and this war is going to continue to grow until it’s a full-fledged sectarian war engulfing the entire region. SABA (Yemen/Houthi) and Press TV (Tehran) and Anadolu (Turkey)

The United States is evacuating the last of its troops and special forces units from Yemen, where they are stationed at Al Anad air base in southern Yemen, near the city of al-Houta. The reason for the quick withdrawal is that Al-Qaeda in the Arabian Peninsula (AQAP) seized the city of al-Houta on Friday, raising concerns about an attack on the air base itself. The American forces have been training Yemen’s military forces in counterterrorism operations, and have also been gathering intelligence to target AQAP terrorists and other militants from US airstrikes. CNN and NBC News