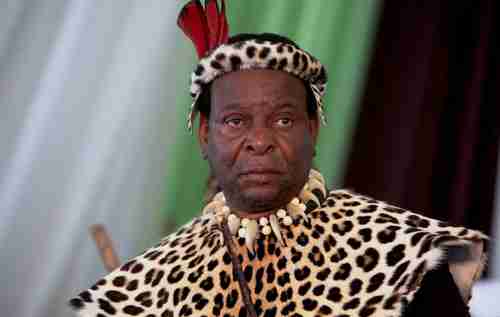 Zulu King Goodwill Zwelithini, whose careless remark is being blamed for triggering the xenophobic violence

Thousands of people, mostly foreigners from Zimbabwe and Malawi, fled for their lives on Tuesday and Wednesday, after mobs with machetes attacked them in the city of Durban. Durban is the largest city in the South African province of KwaZulu-Natal, which is the heartland of the Zulu tribe. The anti-immigrant violence has spread to Johannesburg, raising fears of widespread violence spurred by the country’s dire economic woes.

It is believed that the attacks were triggered by remarks made by Zulu king Goodwill Zwelithini, who said in a public speech, “We are requesting those who come from outside to please go back to their countries.” He has since said his comments were misinterpreted.

South Africa, with a population of about 50 million, is home to an estimated 5 million immigrants, from African countries including Somalia, Ethiopia, Zimbabwe and Malawi, and from further afield, including China and Pakistan. Many own shops or sell wares as informal hawkers on street corners or in markets.

Although tribal tensions have existed continually in South Africa, this is the first major return of xenophobic violence since 2008, when similar xenophobic attacks killed around 60 people. Experts are blaming the xenophobic violence on the 25% unemployment rate, and many believe that this figure is a great understatement. Unemployment is particularly high among young blacks, around 50%, which provides fertile ground for all kinds of violence, particularly anti-immigrant violence.

There had been warnings about the coming violence on social media. One message read:

Wednesday, Zulu people are coming to town starting from Market [Street] their mission is to kill every foreigner on the road please pass this to all your contacts in case they come people should be on alert.

According to one witness:

No amount of frustration or anger can ever justify the attacks on foreign nationals and the looting of their shops. We condemn the violence in the strongest possible terms. The attacks violate all the values that South Africa embodies.

Thousands of people marched in a peace rally through Durban, chanting “Down with xenophobia!” and “A United Africa.” However, the march ended in violence, with police using rubber bullets, tear gas and a water cannon to disperse the crowds. There was a similar reaction to a peace march in Johannesburg. Reuters and AFP and CNN and CS Monitor and Euro News

Zimbabwe’s 91-year-old president Robert Mugabe is being criticized for his silence about South Africa’s xenophobic attacks on foreigners, including Zimbabweans. In particular, he is refusing to help these Zimbabweans return to Zimbabwe, for fear that they will be his political enemies. This comes at a time when Malawi is launching a program to hire six buses to ferry people who voluntarily want to be repatriated to Malawi.

Xenophobic violence in South Africa has deep roots, going back at least two centuries. See my generational history of South Africa in my my 2008 article on the xenophobic attacks of that time.

There is a good reason for Mugabe’s silence, and his reluctance to bring his own citizens back to Zimbabwe: He is pleased that Zimbabweans in South Africa are being killed, so he does not have to have them killed in Zimbabwe.

I have written many times about Syria’s president Bashar al-Assad being a genocidal monster, but al-Assad is a pussycat compared to Mugabe. Mugabe is a member of the Shona tribe, and in his 35+ years of rule, he has repeatedly massacred thousands of people in the other major tribe in Zimbabwe, the Ndebele tribe.

During the 1820s, the Zulu tribe went from obscurity to world renown thanks to one leader, Shaka, and the extremely bloody and brutal war of extermination he led against other tribes in that region. This war was called Mfecane (“the crushing”), and it climaxed in 1828.

Shaka targeted the nearby Xhosa tribe, but many of those crushed by the Zulus in the Mfecane were from the Ndebele tribe, and those who survived were driven into what is now Zimbabwe where they, in turn, massacred the members of the local Shona tribe.

That was almost 200 years ago, but all those old tribal feuds are being revived today.

Mugabe, from the Shona tribe, came to power in 1979. Within a few years, Mugabe sent his army on a “pacification campaign” directed at his Ndebele opponents, resulting in tens of thousands of deaths in 1983 and 1984. The “pacification campaign” was accomplished with the help of Mugabe’s 5th Brigade, trained by North Korea, and was called “Operation Gukurahundi” (The rain that washes away the chaff before the spring rain). Mugabe maintained control since then through torture and jailing of political opponents, mostly from the Ndebele tribe.

During World War II, different political factions wished to side with the British or with the Germans, or stay neutral. But since South Africa was part of the British empire, it fought on the side of the Allies. South Africa’s fighting troops were all whites, but blacks served in non-fighting roles like drivers and guard duties.