Indonesia and Malaysia back down and accept stranded Rohingya migrants 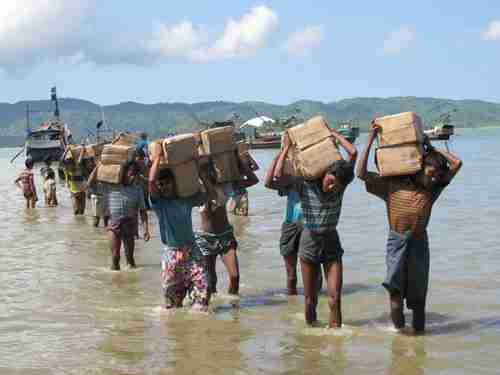 Aid being brought ashore at a Rohingya camp in Burma (Lowy)

International pressures have forced Indonesia and Malaysia to agree to shelter as many as 7,000 migrants on their soil. It is estimated that there are 6,000 to 8,000 migrants in vastly overcrowded boats in the Andaman Sea off the coast of Thailand, Malaysia and Indonesia. Officials say that these three countries are preventing them from reaching land. When one of the boats is spotted, the authorities supply food, water and fuel to the hundreds of people on board, and then push the boat back out into the Andaman Sea, sending it on its way. Some migrants have been at sea for weeks.

About half of them are economic migrants from Bangladesh, trying to reach Malaysia, where it is thought that there is a need for day laborers.

The other half are Rohingya Muslim migrants who have lived peacefully in Myanmar (Burma) for generations, but are now being slaughtered and driven from their homes by Buddhists led by Buddhist monk Ashin Wirathu. From the point of view of Generational Dynamics, this is building into an extremely bloody and genocidal generational crisis war, where huge numbers of both Buddhists and Muslims will be killed before it ends.

Neither Indonesia and Malaysia have wanted to allow the migrants to land on their soil. They offered “humanitarian aid” to some of the boats approaching land by boarding the ship, providing food, water and fuel, and then towing the boat back out into the midst of the Andaman.

The boats are extremely filthy and crowded, and there have been numerous deaths in months of being trapped out in the sea, facing illness and starvation. Human rights advocates around the world have been sharply criticizing the governments of Thailand, Indonesia and Malaysia for allowing the situation to continue.

Under the new agreement, Indonesia and Malaysia will allow up to 7,000 migrants to land, where they will be sheltered for up to a year.

Thailand has refused to join in this agreement, and will treat any migrants as illegal, subject to deportation.

Myanmar (Burma) does not recognize Rohingyas as Thai citizens, even though they have lived there for generations. Myanmar is considered by many to be the core problem that created the migrant crisis. According to the US State Dept:

However, Burma will not even recognize the name “Rohingya,” instead calling them “Bangladeshis.” According to a Burmese official:

If we recognize the name, then they will think they are citizens of Myanmar… Myanmar cannot take all the blame for these people who are now at sea.

Activists are also demanding that the “wealthy countries,” including the United States, take in their share of the migrants stuck at sea. However, Australia is refusing to take any.

The government of the Philippines is saying that it is willing to take in Rohingya migrants. According to one official, “Let us not fall short of providing humanitarian relief and assistance that is asked of us, as we pride ourselves to be a compassionate and hospitable people.” Channel News Asia and Time and Al-Jazeera and Lowy Interpreter (Australia)

Iran backs down and allows inspection of aid ship to Yemen

Iran announced on Thursday that it would dock the ship in Djibouti, where it would be inspected by the international coalition led by Saudi Arabia, defusing the crisis.

In addition, Iran announced that its cargo plane carrying humanitarian aid to Yemen would land in Djibouti for inspection. Press TV (Tehran) and AP