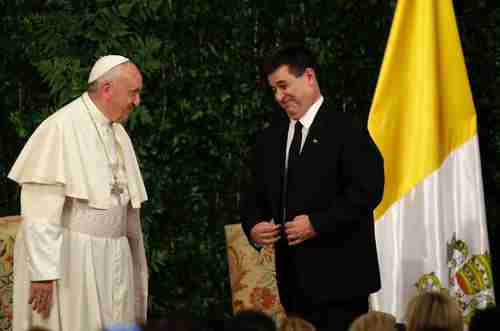 Pope Francis and Paraguay’s President Horacio Cartes meet inside the López Presidential Palace, in Asunción, Paraguay on Friday. The palace was named after president Carlos Antonio López, the father of president Francisco Solano López, who launched the War of the Triple Alliance (AP)

Pope Francis met with Paraguay’s President Horacio Cartes as part of his Latin American tour in the capital city of Asunción.

During his speech Pope Francis praised the women who rebuilt Paraguay after the War of the Triple Alliance devastated the entire country, killing almost all of the men. According to the Pope:

On their shoulders, mothers, wives, widows have been able to pull forward their country. God bless the Paraguayan woman.

The War of the Triple Alliance is an interesting war from the point of view of generational theory. The war was launched against the triple alliance of Uruguay, Brazil and Venezuela by Paraguay’s president Francisco Solano López, who is considered a hero by some, and an insane dictator by others.

López felt insulted, in common with Uruguay, in September 1864 when Brazil intervened in Uruguay without objection from Argentina.

López turned his hurt feelings into a decision to come to Uruguay’s aid militarily, but he vastly overrated Paraguay’s potential as a military power. He had expected Uruguay and Argentina to side with him in fighting Paraguay, but they weren’t interested, instead signing the Treaty of the Triple Alliance, vowing to destroy López’s government.

This was a generational crisis war for Paraguay, but a non-crisis war for the three allies, and all four countries fought the war in typical fashion for their generational eras. The allies would have ended the war quickly with little damage, but López didn’t know when to quit. Paraguay’s soldiers exhibited suicidal bravery, especially considering that Solano López shot or tortured so many of them for the most trivial offenses. By 1867, Paraguay had lost 60,000 men to casualties, disease, or capture, and another 60,000 soldiers were called to duty. Solano López conscripted slaves, and infantry units formed entirely of children appeared. The war was a complete disaster for López. He apparently went completely insane and suffered hallucinations of a vast conspiracy against him.

Allied troops entered Asunción in January 1869, but Solano López held out in the northern jungles for another fourteen months until he finally died in battle. The year 1870 marked the lowest point in Paraguayan history. Hundreds of thousands of Paraguayans had died. Destitute and practically destroyed, Paraguay had to endure a lengthy occupation by foreign troops and cede large patches of territory to Brazil and Argentina.

As regular readers know, Generational Dynamics predicts that China is preparing to launch a preemptive attack on the United States, and is manufacturing thousands of missiles and submarines with no other purpose than to attack American cities, military bases, and aircraft carriers.

The Chinese are very sure of themselves at this time in history. They believe that the US is weak, and unwilling to fight. They see America’s weakness in the South China Sea and in the Mideast, and they conclude that either we will not fight back or that they will knock us out quickly. Like Francisco Solano López and the 1864 Paraguayans, the Chinese vastly underestimate their enemies and vastly overestimate their own military capabilities.

Yes, they will launch hundreds or thousands of missiles, including many nuclear weapons, but that will not be the end of the war. The Chinese will be wrecked by their own internal civil war. They will have Pakistan and the Sunni Arabs as allies, but they will have India, Iran, Russia, Japan, Vietnam and the Philippines as enemies. China’s army has never fought an external war, and they will make many mistakes that the United States will not. It is not possible to predict whether the US will survive, but it is quite possible that a devastated United States will end up winning the war, and China will end up being as destitute and destroyed as Paraguay was in 1870. And it will be what they deserve for launching the war in the first place, just as it was for Paraguay. Telesur TV and Library of Congress Country Study: Paraguay

A meeting on Saturday of the Eurogroup of eurozone finance ministers ended with no agreement on providing any further bailout money to Greece. It is clear that in the last few months there has been a complete loss of goodwill and trust between Greece and the eurozone.

According to Eurogroup chairman and Dutch finance minister Jeroen Dijsselbloem, referring to the proposal submitted by Greece:

We are still far away. It looks quite complicated. On both content and the more complicated question of trust, even if it’s all good on paper the question is whether it will get off the ground and will it happen. So I think we are facing a difficult negotiation. […]

There is still a lot of criticism on the proposal, reform side, fiscal side, and there is of course a major issue of trust. Can the Greek government be trusted to do what they are promising, to actually implement in coming weeks, months and years. I think those are the key issues that will be addressed today.

It is widely believed that whatever reforms Greece agrees to will never be implemented. There are reports that Finland’s parliament has already rejected Greece’s proposal.

Germany is taking a very hard line, and could make its proposal by amending it as follows, with agreement from Greece’s parliament:

In my personal opinion, these three items, particularly the second one, look more like a pathway to war than to a bailout. Can you imagine the reaction to having a German official order Greece’s parliament around?

In the alternative, Germany’s finance minister Wolfgang Schäuble has been floating the idea of a five-year eurozone “time out” for Greece, after which it could return to the eurozone.

Greece has requested enough bailout money to last three years. Others are saying that Greece would only get enough money to get through the summer months, and the whole thing would start again. But this would “kick the can down the road,” which has been what’s happened every time for years. Bloomberg and AFP and Reuters

Not everybody is against Greece. France and Italy have welcomed the Greek proposals and suggest that they would be acceptable.

France’s economy minister Emmanuel Macron and Italy’s Prime Minister Matteo Renzi both said that they are reasonably optimistic that an “aid for reforms” deal can be worked out. However, France’s finance minister Michel Sapin was cautious on Saturday:

The Eurogroup of finance ministers met long into Sunday morning without reaching a conclusion. They’ll try again to reach agreement on Sunday afternoon. If they fail, then there will be a summit of European Union leaders who will decide what to do next. Bloomberg and Reuters