British Prime Minister David Cameron has used a speech on extremism today to rail against the National Union of Students (NUS) for allying themselves with organisations like CAGE, a former Guantanamo Bay detainee group that described beheader Jihadi John as a “beautiful young man” But did you know Mr Cameron and his government have supported the aims of CAGE, before ISIS came along and made Islamism untrendy?

Still, it is nice to see that just six years after I started a counter-extremism pressure group which focused on radicalisation on campuses, Mr Cameron is finally catching up to the issue. Or is he? Today’s speech had a lot of chit chat about extremism. He’s even got some cool buzzwords in there.

But a lot of it was laughable. References to David Irving, citing the PM’s own Munich speech of 2011, and only one reference to the places that so many young Muslims are brainwashed and radicalised in this country – mosques – and when he did dare mention the word, it was only in reference to “communities worried about some poisonous far right extremists who are planning to attack your mosque.”

His mention of the NUS was nothing more than a cheap shot, and broadly speaking, while he’ll probably get a lot of good press out of today, his weasel words won’t escape those who actually know what we’re dealing with when it comes to radical Islam in the United Kingdom.

Mr Cameron started, of course, with the usual diversity and multiculti mumbo-jumbo, moved on to attacking conspiracy theorists, and landed on failures that continue to this day under his premiership: sex trafficking, child grooming, female genital mutilation, and the army of hate preachers that marches across Britain, targeting young Muslims.

It’s not all Cameron’s fault. But it is in part. Which is why his hollow attack on the NUS is even more transparent. Create a bogeyman, let the media do the rest. Within minutes of his speech, establishment journalists will have turned their guns to the group, which, if you know the organisation, is perhaps not a terrible thing. But Mr Cameron is hiding his and his party’s failures on radical Islam. He said today:

“…I want to say something to the National Union of Students. When you choose to ally yourselves with an organisation like CAGE, which called Jihadi John a “beautiful young man” and told people to “support the jihad” in Iraq and Afghanistan, it really does, in my opinion, shame your organisation and your noble history of campaigning for justice.”

I agree in the most part. Apart from the NUS having a “noble history“.

But I was writing about CAGE when they were still called CagePrisoners. I was exposing their work while Britain’s Charity Commission, and groups like the Joseph Rowntree Foundation, were still allowing CAGE to operate freely, and donating tens of thousands of pounds to their ’cause’.

Mr Cameron neglected to mention there is the very same problem amongst some of his own Conservative Party MPs. Sure, he can’t control what backbenchers like Sir Peter Bottomley and David Davis do with their spare time, such as signing a CAGE-backed campaign to release terror suspect Shaker Aamer. But perhaps Mr Cameron had some sway on Jane Ellison MP, after all, she was one of his new intake in 2010, and soon became Parliamentary Under-Secretary of State for Health in his government. 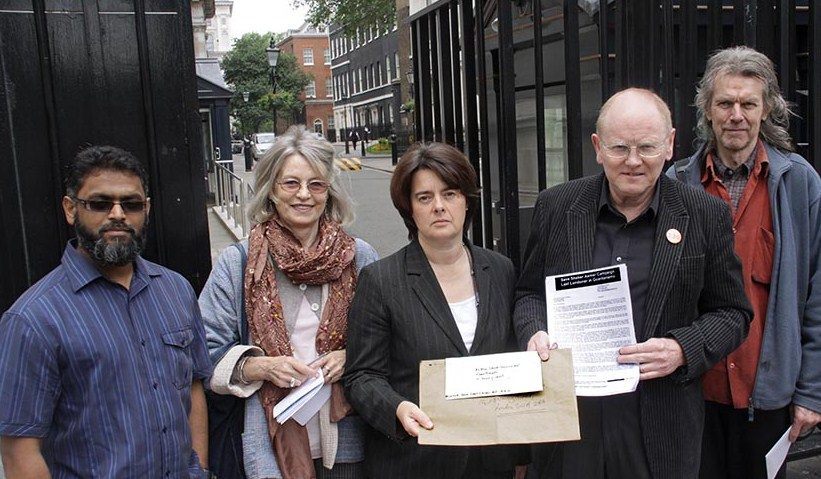 And yet here she is, hosting CAGE in Parliament, ostensibly supporting their campaign. And here is Cameron’s Muslim-in-Chief, Baroness Warsi, supporting the same campaign in the House of Lords. And, wait for it… here’s the Prime Minister doing exactly the same thing, in support of CAGE, and Reprieve, the founder of which is pictured here with CAGE’s notorious Moazzam Begg.

So Mr Cameron can bleat all he likes about some increasingly irrelevant student group. He himself, and his party, have been integral to the activities, not just of CAGE, but in fact of Islamists across the country.

In 2009, I stood in the room when ‘Cast Iron Dave’ announced that his government would proscribe the extremist organisation Hizb ut Tahrir. After he was elected, we were first told that he could do no such thing because of the European Court of Human Rights. Then we were told it was because he had the Liberal Democrats in government with him. Either way, the Prime Minister drastically failed to pull apart, or even to disrupt, one of the most widespread extremist networks in the country.

So how can we trust that his words in his speech today are anything but a complete farce? What has changed since 2007, when he stood in opposition against Gordon Brown, spewing the same hollow rhetoric?

The truth is we can’t trust him. And while I don’t like him, that actually pains me to say. Because what it means is that our tax payer money will continue to be spent on projects that either have no impact, or indeed go to jihad-friendly groups themselves, while our country becomes no safer.

I just wish he’d stand up on stage one day and admit the God-awful truth: “I’ve no idea what I’m doing, but I’m delighted to read this speech today, written by some pimpled nerd on Wikipedia, sitting in my back office.” Then at least we’d be able to remove all doubt about how utterly fucked we are.