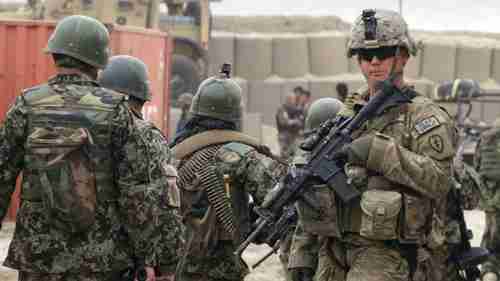 Afghan soldiers, left, walk past a U.S. Army soldier in a military base in 2012 (AP)

President Barack Obama has done an about-face on the issue of troop withdrawal from Afghanistan, and now says that he will leave a force of 5,500 soldiers in Afghanistan on a continuing basis, “to focus on training Afghans and counterterrorism operations.”

According to several analysts, Obama was forced into this by the surprise victory of the Taliban in capturing the city of Kunduz in northern Afghanistan, near the border with Tajikistan. ( “29-Sep-15 World View — Afghan Taliban capture of Kunduz has major repercussions for Central Asia”)

In his speech, Obama said:

As you are well aware, I do not support the idea of endless war, and I have repeatedly argued against marching into open-ended military conflicts that do not serve our core security interests.

This is indeed Obama’s philosophy, but it completely disregards America’s values and America’s role in the world. It is like saying that New York City should not have a police force since crime is endless. The role of the police is to protect the city from crime when it occurs. If you withdraw the police from New York City, then crime will be even more rampant than it is now.

Obama’s repudiation of the Truman Doctrine has been a disaster for the world, since the world no longer has a policeman. This is the concept that Obama completely fails to grasp, which is why the Obama administration has suffered one foreign policy disaster after another. Now, with Afghanistan in crisis, the administration is heading into a new disaster. White House and Washington Post

The ‘surge’ strategy in Iraq and Afghanistan

However, as I wrote in a Generational Dynamics analysis in 2009 in “American army general warns of imminent defeat in Afghanistan war,” the Iraq “surge” strategy would not work in Afghanistan.

The Iraq situation was as follows: Iraq’s previous generational crisis war was the 1980s Iran/Iraq war, in which all Sunni and Shia Iraqis united against the common enemy, Iran. In 2007, I wrote “Iraqi Sunnis are turning against al-Qaeda in Iraq (AQI)” (the best analysis of the Iraq war available anywhere at that time), where I explained that AQI consisted of mostly Jordanian and Saudi terrorists, but that Iraqis were only marginally involved and were happy to get rid of these foreign terrorists.

But Afghanistan was quite different. Its previous generational crisis war was the Afghan civil war from 1991 to 1996. There was no united country for the “surge” to appeal to. Even worse, the Taliban terrorists were from the same Pashtun ethnic group that was conducting terrorist acts in Pakistan. In Iraq, the Jordanian and Saudi terrorists were foreigners, but in Afghanistan, the Pashtun terrorists were not.

China and US poised for South China Sea military confrontation

It has been rumored for several months that the US Navy plans to send a vessel into the South China Sea close to the man-made island chain that China has been building, apparently to provide a platform for a large military base. Now reports indicate that approval of the plan may be imminent.

Secretary of Defense Ash Carter has not commented on the specific plan, but said generally: “United States will fly, sail, and operate wherever international law allows, as we do all around the world.”

Chinese state media claims that “The US must have known that China’s reclamation work does not contravene international law, so Washington has no sufficient reason to stop China.” However, the US Navy is not saying anything about trying to “stop China.” All the US Navy plans is to send a vessel near the islands through international waters.

According to China state media:

Washington’s ceaseless provocations and coercion can only demonstrate that it does not intend to protect freedom of navigation in this region, as China has clearly stated that the right will not be impeded. What the US wants is to play rough against China and stress its hegemony.

In this case, China mustn’t tolerate rampant US violations of China’s adjacent waters and the skies over these expanding islands. The Chinese military should be ready to launch countermeasures according to Washington’s level of provocation.

The US must have known that China’s reclamation work does not contravene international law, so Washington has no sufficient reason to stop China. Despite the legitimacy of China’s construction work and the public good it can provide, if the US adopts an aggressive approach, it will be a breach of China’s bottom line, and China will not sit idly by.

China has remained calm with self-restraint even in the face of Washington’s escalating provocations, but if the US encroaches on China’s core interests, the Chinese military will stand up and use force to stop it.

And so, unless either the US or China backs down, there will be a military confrontation. I do not think that China will back down, but it is quite possible that the Obama administration will back down. Military Times (7-Oct) and Navy Times and Global Times (Beijing)