Israelis line up to buy guns as Palestinian violence increases 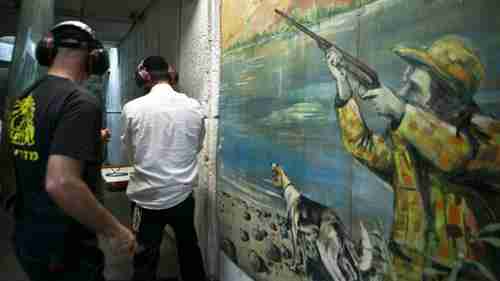 Israel’s Internal Security Ministry has eased some of its gun control laws to allow more people to purchase guns for self-defense, in view of the increasing violence by “lone wolf” Palestinians. At first they were mostly stabbing attacks, but recently ramming people with cars has been increasing.

The result has been long lines at gun shops and firing ranges. A gun costs between $730 and $1,170. Supplies of less lethal defenses, such as pepper spray or a club, have been sold out.

Uri David, an Israeli importer of Glocks, has seen a 50% increase in demand:

Already last year, we saw an increase in sales during Protective Edge [last summer’s 60-day Gaza war], mainly from people living in the south. Right now the demand is reaching levels never seen before. As an importer, it usually takes a while for new orders to starting coming in from dealers. This time I was surprised by how fast new orders started rolling in.

For years, new Israeli gun control laws have put additional obstacles in the way of getting a license to own a gun, with the result that gun ownership has decreased. It is estimated that Israelis own about 90,000 firearms, down from 350,000 in 1995. Haaretz and NPR

According to Adnan A’it, a leader in the West Bank terror group Tanzim, “no one has any control over what is happening” in regard to the growing violence in Jerusalem, and Israel’s prime minister Benjamin Netanyahu is to blame:

Things are getting worse, and will continue to get worse. … No one but him is responsible for this situation. The Palestinian Authority does not have the resources to rule properly, and that makes Netanyahu responsible.

Tanzim is a militant group in the West Bank affiliated with Fatah, the armed wing of the Palestinian Authority (PA). It was formed by Fatah in 1995, and played a leading role in the second intifada, which began in 2000. The head of Tanzim is Marwan Barghouti, who is serving time in an Israeli jail for murder.

As I wrote recently in “18-Oct-15 World View — Palestinian ‘Oslo Generation’ relationship with Israel extremely toxic and explosive”, the young 15-20 year old kids in the Palestinian “Oslo generation” are increasingly contemptuous of Abbas, Hamas and other Palestinian leaders, and are taking out their increasing anger and frustration in the form of stabbing and ramming attacks against Israelis in Jerusalem and increasingly across the West Bank.

As I wrote in that article, there is a concept in generational theory of a “Grey Champion,” a usually older person who emerges to lead the younger generation into war. Who that leader will be is not yet known, but the Tanzim terrorist organization is increasingly in a position either to provide that leader from its ranks or to endorse that leader, wherever he comes from.

For example, Jibril Rajoub, one of the leaders in Tanzim, is positioning himself to be that leader as a candidate to succeed Abbas. When the current wave of violence just started, Rajoub was still urging the Palestinian security forces to hold a dialogue with Israel. But now, this week, he changed his tune to a far more extreme position, encouraging the knife-wielding terrorists. This kind of rhetoric only serves to increase his popularity on the Palestinian street. Israel National News and YNet News and Al Monitor

Representatives of European lenders have been meeting with Greece’s government in Athens to negotiate the terms for the next bailout money, totaling 86 billion euros. Greece must implement dozens of reforms by the middle of next week, before the Euro Working Group meets on Thursday, in order to get approval for the release of the first 2 billion euros of the new bailout.

The main sticking point in the current negotiations is said to be foreclosures on homeowners who have fallen behind on their mortgage payments. Greece’s prime minister Alexis Tsipras has set a “red line” that any home valued at 200,000 euros or less be immune from foreclosure. According to Tsipras, turning the country into an “arena of confiscations” of homes was out of the question.

The European lenders want that limit to be 120,000. If too many non-performing loans are on the balance sheets of Greek banks, then it will be much more difficult to recapitalize the banks and make them healthy again.

Negotiations will continue over the weekend. Kathimerini and Reuters