Russia and Turkey move closer to the brink of war 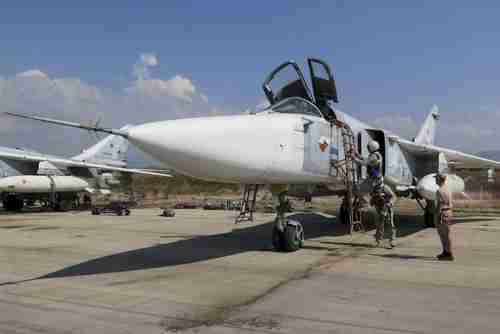 Russia’s president Vladimir Putin is said to be inconsolably furious at Turkey for shooting down a Russian warplane on Monday. This incident has struck Putin in a deeply visceral way, and there is little doubt that he will seek retaliation. ( “25-Nov-15 World View — Turkey shoots down Russian warplane, evoking memories of many Crimean wars”)

According to a statement issued by Russia’s military:

“The General Staff is currently working out additional measures to ensure the security of the Russian air base.

First: all actions of strike aircraft will be carried out only under cover of fighter planes.

Second: measures will be taken to strengthen defense. To this end, the cruiser Moskva, equipped with Fort air defense system, similar to S-300, will assume position in the coastal region of Latakia. We caution that any targets, representing a potential danger for us, will be destroyed.

Third: Contacts with Turkey on military lines will be discontinued.”

Russia is deploying its most advanced ground to air missile system in Syria. These missiles could target Turkish warplanes, and also bombers from the U.S.-led coalition, including those from the U.S., France and Britain.

I heard several analysts refer to this as a major escalation that could easily lead to a military conflict between Turkey and Russia. Many people believe that Putin will seek further retaliation against Turkey. Indeed, Putin has already promised “serious consequences” for the incident, which was a “stab in the back.” This retaliation could take many forms, and a military conflict could be triggered either intentionally or unintentionally.

Russia has used protection of ethnic Russians in Ukraine as an excuse for its army to invade and occupy portions of Ukraine, and annex its Crimean peninsula. As we described yesterday, the Turks wish to protect Turkmen rebels in Syria and Turkic Tatars in Crimea for the similar reasons, and they’re furious that Russians are treating Tatars harshly in Crimea, and that Russian warplanes are bombing Turkmen villages in Syria.

So neither of these two countries is satisfied, and either one make seek further military retaliation against the other. International Business Times and Reuters

According to a Turkish analysis, shooting down the Russian warplane was to be expected because “It was Russia that stabbled Turkey in the back.” According to the analysis:

Interestingly enough, it seems likely that there is one important thing that the Russians and Turks agree on: That nothing about the current situation is accidental, and both are taking deliberate steps to provoke the other — Russia in bombing Turkmen and not ISIS, and Turkey in shooting down the Russian plane in retaliation. Daily Sabah (Istanbul)

At a joint Washington press conference with France’s president François Hollande on Tuesday to discuss the terrorist attacks in France and Mali, President Barack Obama said:

“Next week I will be joining President Hollande and other world leaders in Paris for the Global Climate Conference. What a powerful rebuke to the terrorists it will be when the world stands as one and shows that we will not be deterred from building a better future for our children.”