France demands that Russia target only ISIS in Syria 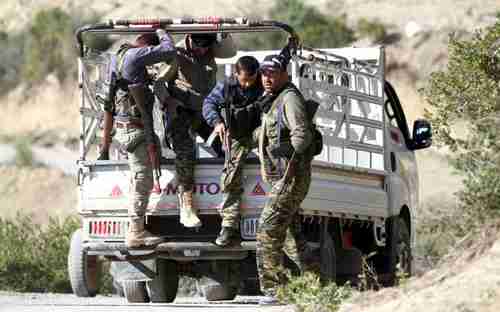 In fact, there are been numerous Western media reports indicating that Russia’s warplanes are hitting an occasional ISIS target, but Russia is mostly leaving ISIS alone, which seems odd when Russia’s president frequently talks about how dangerous ISIS is. Instead, Russia has been targeting non-ISIS rebels fighting the regime of Syria’s president Bashar al-Assad.

Reuters has done an analysis of data available from Russia’s Defense Ministry, and found that Russia’s own data supports the Western media reports.

Instead, Russia has been targeting regions that have no ISIS presence, but whose population is largely ethnically Turkmen, who are Syrians of Turkish descent, descended from groups who began moving from Turkmenistan in Central Asia into present-day Syria in the tenth century.

Furthermore, Russia has been targeting these Turkmen regions long before Turkey shot down the Russian warplane.

On Thursday of last week, France’s president François Hollande traveled to Moscow to meet with Russia’s president Vladimir Putin. Hollande said that Putin had agreed that Russian attack should only hit ISIS and “similar jihadi groups” in Syria. There is no evidence that Russia is abiding by this statement which, like most of Putin’s statements, is really meaningless.

On Friday, a spokesman for France’s former ministry was asked about Russian airstrikes on Turkmen areas. The spokesman, Romain Nadal, said:

There can be no possible ambiguity on the objectives being pursued, which must only target the destruction of Daesh (ISIS).

According to the Reuters data analysis, however, Russia’s warplanes are still heavily targeting ethnic Turkmen areas. Reuters and Independent (London) and Reuters

There are two sides to this story, both sides filled with wishful thinking. On one side, Russia’s military intervention in Syria and the new sanctions imposed on Turkey are so expensive that Russia cannot afford them for long.

On the other side, Putin is determined to continue his Syria policy, irrespective of the cost. This view was express by Henri Barkey of the Woodrow Wilson International Center, being interview on al-Jazeera (my transcription excerpts):

Putin wants to make sure that Erdogan really pays a very heavy price for this.

This is clearly a case where Erdogan overreached. It was a mistake to shoot down the airplane. Initially after the shooting down, Erdogan was very bombastic about it, and said he would do it again.

And so Putin has ratcheted up the pressure on Erdogan. The Turks are now realizing that this was a huge mistake, and I think everyone now realizes it. A Turkish airplane was shot down in Syria three years ago, and Erdogan had said at the time a minor violation of the airspace is no reason to attack. And now he does exactly the same thing for a 17 second violation. So the Russians are understandably upset. Even Turkey’s Nato allies are upset, because this has given Putin the excuse to bring huge amount of military equipment into the region, including S-400 very sophisticated anti-air missiles.

And this is going to make American and allied bombing raids over Syria much more difficult, because they have now to worry about this very sophisticated system, even if the Russians have no intention of shooting down American airplanes. So this has been a terrible mistake on the part of Erdogan, a completely unnecessary one, and now he’s paying the price for it. Putin is probably enjoying this, and wants to make Erdogan even more humiliated as he can.

However, Turkey-Russian commerce is worth an estimated $31 billion annually, with Russian wheat and gas and Turkish agricultural products making up the bulk. Russia’s economy has already been battered by European sanctions and the collapse in the price of oil, and is suffering from severe inflation that is approaching 20% per year. According to one Israeli analyst, Russia’s companies will suffer from Russia’s sanctions even more than Turkish companies, especially since Russia is so much more isolated, while Turkey is being pushed into the arms of Europe.

Russia’s military adventures in invading and occupying Ukraine and annexing Crimea have been extremely expensive for Russia, and Russia has already been forced to cut back his military in eastern Ukraine in order to transfer troops and equipment to Syria.

Russia’s military intervention in Syria is now hobbled for a non-economic reason. He would like to strike back at Turkey militarily, but that would result in a confrontation with Nato, which would be forced to support Turkey.

Turkey has one powerful sanction that it could use against Russia: According to the 1936 Montreux Convention, Turkey must allow Russia and other Black Sea states to send ships of commerce and of war through the Turkish straits (the Bosporus and Dardanelles channels), which connect the Black Sea to the Mediterranean Ocean. The Montreux Convention has been very important to Russia following its recent military occupation and annexation of Crimea, and its plans for a major expansion of its naval base at Sevastopol, where its Black Sea fleet is based. If Russia strikes too hard at Turkey, either militarily or through sanctions, then Turkey may close the Bosporus to Russian ships. That would be a powerful sanction, but it would probably trigger a new war such as those that the Turks and Russians have been fighting for centuries. ( “25-Nov-15 World View — Turkey shoots down Russian warplane, evoking memories of many Crimean wars”)