The government of Turkmenistan has recently issued the latest in a series of bizarre decrees from Central Asia, strictly regulating the naming of horses and criminalizing a failure to issue a horse a proper burial upon its death.

The law only affects owners and breeders of one breed of horse, the Akhal-Teke, which is venerated in Turkmenistan as a national sacred animal. President Gurbanguly Berdymukhammedov has made it illegal to change the name of one of these horses during its lifetime and criminalized the improper burial of such a horse. They must now “be buried in an area designated by local authorities and in the presence of an official, who will register the death,” according to Radio Free Europe. The law will be especially taxing on rural breeders who live miles from government offices. RFE notes that burial ceremonies for horses are common, however, so the codification of this practice will not result in any new tradition.

Since its liberation from the Soviet Union, Turkmenistan has developed a reputation for being one of the most repressive and eccentric dictatorships in Central Asia. Berdymukhammedov – who has given himself the title “People’s Horse Breeder” and erected a gold statue of himself on horseback in the nation’s capital, Ashgabat – has developed a reputation for bizarre edicts. Human rights groups have also revealed evidence that Turkmen prisons use electric shock and rape as modes of punishment for prisoners of conscience. The group Freedom House has compared Turkmenistan’s human rights situation to that of North Korea and Sudan. 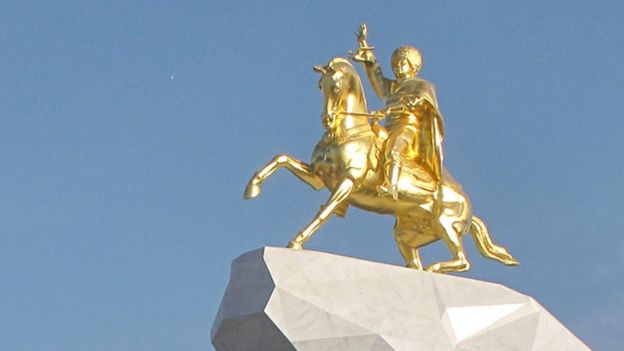 Statue of Turkmenistan President on horseback in Ashgabat

Berdymukhammedov is nonetheless considered more liberal than his predecessor, Saparmurat Niyazov. Berdymukhammedov is believed to have reversed a Niyazov edict banning opera in the country and softened mandatory assignment of Niyazov’s religious work, Ruhnama (The Book of the Soul), in schools. Ruhnama has been described as a “rambling” and “repetitive” combination of “history, moral guidance, philosophical teachings, and Niyazov’s memoirs.” Before his death in 2006, Niyazov erected a revolving statue of the book itself in Ashgabat:

Turkmenistan is not unique in the region for its oppressive human rights record. Central Asia is a hotbed of bizarre dictatorships issuing seemingly arbitrary edicts to control the daily lives of their people. In Uzbekistan, for example, professional musicians have been recently placed under governmental monitoring. The law demands they issue “quarterly reports” on their performances to ensure they follow Uzbekistan’s “age-old spiritual and cultural values and national traditions.” In Tajikistan, celebrating one’s birthday in public is illegal, a violation of “traditions and customs in the Republic of Tajikistan.”

Central Asian nations are especially important geopolitically due to the rise of the Islamic State in neighboring Afghanistan and the Russian region of Chechnya, as well as pivotal to the economic prospects of nations like Turkey seeking business with east Asia.

Turkmenistan – described by the strategic analysis company Stratfor as “arguably the most neutral and paranoid of the Central Asian states” – has recently shut down a number of Turkish projects in the region and is a close ally of Russia, and the Turkish government fears it will shut down oil and gas deals following the shooting down of a Russian warplane on the Turkish border. Meanwhile, fears that the Islamic State will spread its influence out of Afghanistan and across the border into Turkmenistan are increasing. Reports suggest that Turkmenistan has allowed a small number of Russian and Uzbek troops to monitor the border, hoping to keep Islamist extremists out. As the goal of the Islamic State is to maximize its territorial conquest, the relative remoteness of Turkmenistan is no obstacle, particularly given its rich oil and gas reserves.

In addition to Afghanistan, where ISIS recently opened a new radio station, the Islamic State has absorbed a Central Asian jihadi group, the Islamic Movement of Uzbekistan. That group’s leadership pledged allegiance to Islamic State “caliph” Abu Bakr al-Baghdadi in August, insisting it had created a satellite “state” for ISIS within Uzbek borders.

Secretary of State John Kerry visited Turkmenistan in November, seeking closer business ties with its leadership. “We can do more together to help your people develop some of the skill sets necessary in this modern economy,” Kerry said at a meeting with Berdymukhamedov.