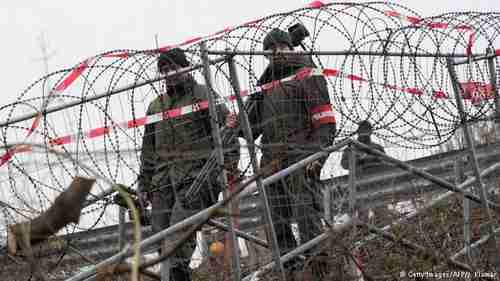 Razor wire installed by Austria on its border (AFP)

Thousands of Afghan migrants were left stranded in Greece on Monday, after Macedonia abruptly closed its borders to Afghans. This was just one of several border closing actions taken by European countries, threatening open borders, one of the core principles of the European Union.

It is only 53 days into the new year, and figures published by the International Organization for Migration showed that 102,547 people had arrived in Greece and another 7,507 in Italy so far this year, even though it is still winter. In 2015, the threshold of 100,000 was not reached until the end of June. This number could double as warm weather arrives, and it is possible that well over a million new refugees will flood into Europe this year.

Since November, European officials are attempting to deal with the refugee crisis by distinguishing between refugees from war zones in Syria, Iraq and Afghanistan, versus economic refugees from other countries. Thus, the Balkan countries have been permitting only migrants from these three countries to pass through their borders to go north to Germany, Sweden, and other European nations where they plan to apply for asylum.

Macedonia was also following this policy until Monday, permitting migrants only from those three countries to cross the border from Greece. However, Macedonia abruptly announced that Afghans would no longer be permitted to cross, and some 12,000 were left trapped on the Greek side of the border on Tuesday.

This situation was triggered by an announcement on Friday by Austria that it would introduce a cap of only 80 asylum-seekers per day, and would only let 3,200 migrants pass through to Germany each day. 3,200 migrants per day is still more than one million per year.

Austria’s announcement led Montenegro also to announce that it was closing its borders. Montenegro has not in the past been on the main route used by migrants, but “If the European countries dealing with the consequences of the migrant crisis opt to close their borders, what else is there for a country like Montenegro to do?” asked prime minister Milo Djukanovic at a meeting in London.

Macedonia’s announcement triggered riots along the border in Greece. Greek police have been removing hundreds of migrants from a camp at the country’s border with Macedonia and putting them on buses bound for Athens, where they will be housed in an army-built camp.

EurActiv and The Local – Austria

Belgium is implementing border controls with France, after France’s announcement that it would close a portion of its refugee camp in Calais.

Migrants whose goal is to reach Britain usually travel to Calais, the point in France closest to Britain. From there, they hope to hitchhike on the truck traffic traveling through the tunnel to Britain under the English Channel.

France has set up a notorious camp for migrants that has become known as “The Jungle,” where they can sleep in tents and receive free hot meals. There are currently about 4,000-5,000 migrants living in the camp, of which 205 are women and 651 are children.

Last week, officials in France announced that they would evict about 1,000 migrants living in southern part of The Jungle.

France’s interior minister Bernard Cazeneuve said the eviction would be done “progressively, by persuasion and with respect for people’s dignity.” Evicted residents have been told they must choose between moving into refitted shipping containers set up in the camp or to a migrant accommodation center elsewhere in France. Many migrants are balking at leaving, and are determined to stay.

Belgium officials fear that migrants evicted from the Jungle will simply move on to Belgium hoping to cross the English Channel by boat. Because thousands of migrants entering Belgium is a possibility, officials are imposing border control. According to Belgium’s interior minister Jan Jambon, “They’re already on their way here.” BBC and France 24

According to one analyst, Germany’s Chancellor Angela Merkel didn’t show it, but she is furious with Austria for imposing further border controls, because doing so left her alone on the refugee issue.

Merkel is a strong proponent of the principle of open borders, a right that is at the core of the European Union. The Schengen Zone is a group of 26 European countries that permit visa-free border crossings among them. However, one country after another has been imposing border control, under the “emergency situation” terms of the Schengen rules. But with the mass of refugees growing, it is feared that the emergency will last a long time.

East European countries, in some cases with strong cultural memories of being dominated by the Ottoman Empire, have imposed the strong border controls. Greek officials are complaining bitterly, because they end up being responsible for the thousands of migrants that enter Greece each day. There are fears that the entire Schengen Zone system could collapse.

A study by Germany’s Bertelsmann Foundation has found that if the Schengen Zone collapses, it will cost the European Union 1.4 trillion euros over the next decade, mainly because the EU’s already weak economic growth would be severely impacted by introduction of new import fees and trade restrictions.

Beyond the economic implications, the political implications of the refugee crisis are enormous. There may be two million migrants coming into Greece this year. Migrants who are blocked from taking one route will take another. Many will pay a great deal of money to people smugglers to get them to Germany over back roads that aren’t being patrolled. These are problems that the European Union may not be equipped to handle. It’s a real question what will be left of the European Union’s core principles by the end of 2016. Deutsche Welle and Reuters and VOA and Deutsche Welle