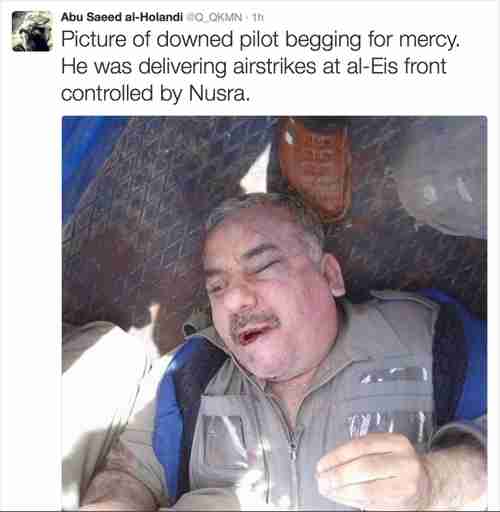 Ahrar al Sham (al-Nusra) tweet posted after the Syrian warplane was shot down, with a picture of the captured Syrian pilot (Long War Journal)

Syrian regime media are confirming that jihadists have shot down a Syrian warplane with a surface-to-air missile launched by “terrorist organizations,” and that the pilot parachuted to the ground. A furious Syrian regime field command is quoted as saying, “In the imminent future, the fires of hell will open on the armed groups in the north, south, east and west [of Aleppo],” adding that “devastating battles” are planned in revenge.

Ahrar al Sham, an al-Qaeda linked group associated with Jabhat al-Nusra (al-Nusra Front), has claimed responsibility, and says that the Syrian pilot is in custody.

As we reported yesterday, militias opposed to the regime of Syria’s president Bashar al-Assad achieved a strategic victory by capturing the village of Al Eis and taking control of a portion of the country’s vital M5 highway. Tuesday’s shootdown of the Syrian warplane apparently occurred during attempts by the Syrian military to recapture the village.

This is the second Syrian warplane to be shot down. Syria says that an anti-aircraft missile was also used to shoot down a warplane in western Syria in March.

If it is confirmed that jihadists now have anti-aircraft missiles, it would be a major escalation in jihadist weaponry. However, it’s possible that the warplane was brought down by artillery fire. Daily Star (Beirut) and SANA (Damascus) and Long War Journal and Reuters

A new sanctuary for fighters, planners and recruiters for the so-called Islamic State (IS or ISIS or ISIL or Daesh) has been established right in the middle of Europe. Some 200-300 Islamist radicals have left Bosnia-Herzegovina to join ISIS or al-Qaeda in Syria and Iraq, and as a share of population, more fighters from Bosnia-Herzegovina have joined ISIS than from any other country in Europe except Belgium. There are around a dozen places in Bosnia where Salafists can train radicals, undisturbed by authorities. In fact, the black flag of ISIS is even flown in some remote villages in Bosnia-Herzegovina.

And it can be seen in other Balkan countries besides Bosnia. According to research into six countries in the region – Albania, Bosnia, Kosovo, Macedonia, Montenegro and Serbia – about 877 nationals from the six states have traveled to Syria and Iraq. About 300 are believed to have returned home.

Most Balkan nationals travelled to Syria and Iraq during 2012 and 2013, with the highest numbers coming from Bosnia, Kosovo and Macedonia. The numbers traveling to join jihadi groups declined sharply in 2014, after most states adopted law reforms that criminalize illegally fighting in foreign wars.

The origins of Balkan radicalization can be traced back at least to the Bosnia war of the early 1990s. It was a three-way war, with the Bosniaks [Bosnian Muslims] fighting against the Catholic Croatians and the Orthodox Christian Serbs.

We have described many times how the Soviet Union’s occupation of Afghanistan in the 1980s triggered a flow of Sunni Muslim jihadists from the Soviet Union to fight the Orthodox Christian invaders, resulting in the formation of al-Qaeda and leading to the 9/11/2001 attacks. (See “12-Sep-15 World View — Saudi Arabia’s Grand Mosque, site of huge construction accident, has links to 9/11”),

A related story can be told about the Bosnian war. Saudi Arabians and other Arabs traveled to Bosnia and formed the Mujahideen Battalion in Bosnia in 1992, to fight the Christian Serbs and Croatians. The Mujahideen Battalion grew to hundreds of volunteers by the end of the war. It is believed that the arrival of the Arabs was supported by Bosnian politicians, in order to please wealthy Arab donors.

After the war, hundreds of Mujahideen Battalion members went from Bosnia to Chechnya, Pakistan and Afghanistan. Among their alumni were two of the 9/11 hijackers, and the murderer of American hostage Daniel Pearl.

During the Bosnian war, hundreds of Arab volunteers came to join the Mujahideen Battalion. Today, the flow of volunteers has reversed, with Bosnian volunteers traveling to Syria to join ISIS.

According to Aimen Dean, a Saudi Arabian volunteer who went to fight in Bosnia in 1994: “There is a war between the West and Islam. Bosnia gave the modern jihadist movement that narrative. It is the cradle.” Der Spiegel (Germany) and Balkan Insight (30-Mar) and BBC (2-Jul-2015)