EU-Turkey migrant deal unravels over brinksmanship on both sides 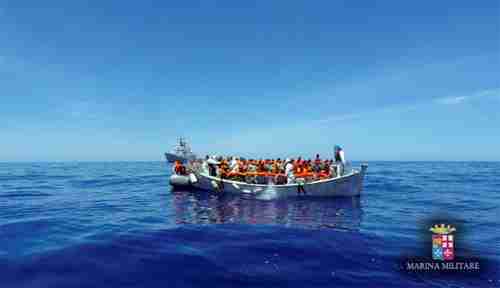 Italy’s coast guard rescued over 800 migrants from the Mediterranean Sea on one day, Thursday (Reuters)

Both Turkey and the European Union are issuing ultimatums.

Turkey is demanding that the EU honor its agreement to allow all Turkish citizens to have visa-free travel throughout Europe’s Schengen Zone. President Recep Tayyip Erdogan and former prime minister Ahmet Davutoglu have said repeatedly, since March 20 when the EU-Turkey migrant deal was signed, that the EU must fulfill its pledge to permit visa-free travel by Turkish citizens by June, or else Turkey would cancel the deal and allow floods of migrants to resume flooding across the Aegean Sea to Greece.

The EU is demanding that Turkey must bring its anti-terrorism laws into line with European standards. Turkey’s anti-terrorism laws are so broad that they criminalize almost any kind of political dissent, and are used to arrest journalists and academics critical of government policies. They were used as justification for the seizure of the country’s largest newspaper, Today’s Zaman, because it criticized Erdogan’s policies. ( “6-Mar-16 World View — Turkey’s ‘shameful day for free press’ as government seizes Zaman media”)

Changing the anti-terrorism laws was one of the terms of the agreement that the European Union negotiated with Turkey’s prime minister Ahmet Davutoglu. There were 72 conditions that Turkey would have to meet before the visa-free travel could be implemented. Almost all of them have been met, but the anti-terrorism change has not. Erdogan was infuriated that Davutoglu made this concession, and fired him last, saying that Turkey could not and would not change its terrorism laws while it is being receiving terror attacks from both the Kurdistan Workers’ Party (PKK) and the so-called Islamic State (IS or ISIS or ISIL or Daesh). ( “7-May-16 World View — Turkey’s Erdogan threatens EU: ‘We’ll go our own way, you go yours!'”)

Turkish officials point out that Turkey is currently hosting the largest number of Syrian refugees in the world with 2.7 million, and has spent more than 7 billion euros meeting their needs. Erdogan says that the EU has a much smaller refugee problem and a much smaller terrorism problem, and that EU officials are hypocritical for criticizing Turkey.

With positioning hardening on both sides, people are looking for a face-saving agreement. Otherwise, the EU-Turkey deal is going to fall apart. Irish Times and Daily Sabah (Ankara) and Hurriyet (Ankara)

More refugees now reaching Europe via Italy than via Greece

The change was mostly due to a slowdown of migrants arriving in Greece since the EU-Turkey migrant deal.

In April, after the deal 3,462 people arrived in Greece, while 9,149 migrants arrived in Italy.

Migrants arriving in Greece come from Syria, Iraq and Afghanistan. Asylum seekers making their way through the Mediterranean are primarily from Nigeria, Gambia, Somalia and other Sub-Saharan African nations. EU Observer and Bloomberg

Italy rescues 800 migrants from Mediterranean Sea, many of them from Syria

There are signs in the last few days that a new wave of refugees from Syria have shifted traveling through Turkey to Greece via the Aegean Sea to a new route from Libya to Italy via the Mediterranean Sea.

The Italian coast guard says that it rescued more than 800 migrants off the coast of Sicily in one day alone, Thursday, and that at least 150 of them were Syrian, and 40 were from Iraq.

Authorities had feared that with the closing of the “Balkan Route” for refugees crossing the Aegean Sea to Greece, people smugglers would begin redirecting refugees to Libya, to cross to Italy. Typically, the people smugglers put hundreds of migrants into a single large rubber dinghy, and give the migrants enough fuel to leave Libyan waters and a cell phone to use to call the Italian coast guard.

Fearing a flood of migrants crossing Brenner Pass from Italy to Austria, Austria is building a fence on the common border. ( “28-Apr-16 World View — Austria votes to close border with Italy to slow refugees”) Austria’s plan has received widespread condemnation from human rights groups and many EU officials. Reuters and AFP