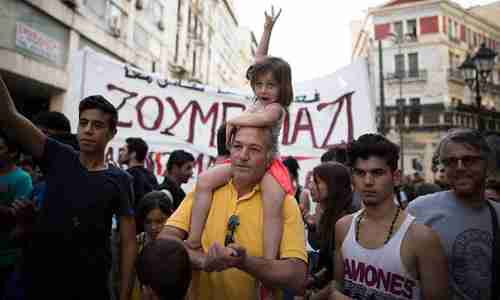 People demonstrate in support of refugees in Athens on Thursday (Guardian)

A report by Unicef has found that sexual exploitation of children living in refugee camps in northern France is common on a daily basis. Many young boys are raped, and many young girls are raped and forced into prostitution.

Many of them have family members in the UK who are waiting for them to arrive. However, processing of children has been very slow, and only 30 of the 500 unaccompanied children have so far been brought to the UK.

In order to reach France, human traffickers have already charged them $3,000 to $12,000. They are forced to pay an “entry fee” before they are allowed to live in the camps. Once in the camp, traffickers are charging another $6,000 to cross the channel into Britain, a higher price than ever before.

The Unicef report quotes one 16-year-old girl as saying “I know that if I pay or offer sex, I will cross more quickly. I have been asked to do this. It’s hard to say no.” A boy says that he was “gassed and beaten here” in France.

For these unaccompanied children, there is little protection from the cold and no access to schooling, and they are subjected to sexual exploitation, violence and forced labor on a daily basis. There’s also evidence that they’re being forced to commit crimes.

Unicef is demanding that, at the very least, unaccompanied children with families in the UK should be processed more quickly and allowed to travel to their families.

This is an explosive situation. On the one hand, you have a massive humanitarian disaster involving children on a daily basis, in one modern, developed country, France, wishing to travel to another modern, developed country, Britain, to see their families. On the other hand, you have European populations in Europe that are increasingly resistant to allowing refugees into their countries under any circumstances whatsoever. This situation will not change if the “Brexit” referendum passes, and Britain leaves Europe, and almost certainly will worsen, because France will no longer be under any obligation to prevent refugees in Calais from crossing the Channel to Britain.

Those who don’t like these conclusions shouldn’t blame me. Think of me as the weatherman. I’m not saying whether the category 5 hurricane is good or bad, but I’m only telling you that it’s coming. There is no happy ending to this crisis. Unicef and Christian Today and Belfast Telegraph

In a move that my mother would probably have called “cutting off your nose to spite your face,” the international aid organization Médecins Sans Frontières (MSF – Doctors without Borders) announced on Friday that they will no longer accept money from the European Union because of its “shameful” response to the refugee crisis, especially as the EU-Turkey refugee deal is being implemented.

For months MSF has spoken out about a shameful European response focused on deterrence rather than providing people with the assistance and protection they need. The EU-Turkey deal goes one step further and has placed the very concept of “refugee” and the protection it offers in danger. […]

Is Europe’s only offer to refugees that they stay in countries they are desperate to flee? Once again, Europe’s main focus is not on how well people will be protected, but on how efficiently they are kept away. […]

Europe’s attempt to outsource migration control is having a domino effect, with closed borders stretching all the way back to Syria. People increasingly have nowhere to turn. Will the situation in Azaz where 100,000 people are blocked between closed borders and front lines become the rule, rather than the deadly exception?

The last sentence refers to Azaz, a city in Syria with 300,000 people, of which 200,000 are already displaced. The forces of the so-called Islamic State (IS or ISIS or ISIL or Daesh) are now within 5 km of Azaz, and have threatened a huge massacre if they take control of the city.

This is a total fantasy on MSF’s part. As I read the situation, ISIS is going to torture, massacre and slaughter tens or hundreds of thousands of people in Azaz, and nobody is going to stop them. Those people are already as good as dead.

Oberreit is turning down something like $50 million in aid from the EU that it could use to help people as part of its mission. By turning this money down, Oberreit apparently hopes to shame Turkey and the EU into permitting those 300,000 refugees to flee reach the EU. Instead, they’re just going to lose $50 million in aid for no reason at all. Médecins Sans Frontières and Reuters and Middle East Eye