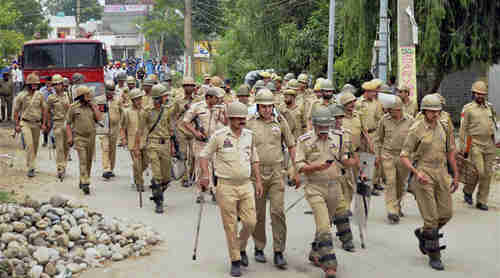 Indian security personnel in Kashmir after violent protests in 2015 (PTI)

The increasingly vitriolic war of words between India and Pakistan probably would not make much difference to anyone, since it could simply be ignored as mutual political bashing, which is so common these days in countries around the world, in this generational Crisis era.

However, the increasing vitriol is occurring in the context of increasing “organic” violence in Indian-controlled Kashmir, where the stone-throwing crowds continue to grow and India continues to respond with pellet guns that have wounded, blinded or killed hundreds of Kashmiri Muslims since the violence began on July 9, following the death on July 8 of Burhan Wani, a 22-year-old commander in the separatist militia Hizbul Mujahideen (HM), at the hands of India’s security forces.

[Burhan Wani] represents a new generation of Kashmiris are fighting for freedom against India.

This indigenous uprising of the Kashmiris has been met, as usual, with brutal repression by India’s occupation force of over half a million soldiers. Over a hundred Kashmiris have been killed, hundreds, including children and infants, blinded by shotgun pellets and over six thousand unarmed civilians injured over the past two months.

On behalf of the Kashmiri people; on behalf of the mothers, wives, sisters, and fathers of the innocent Kashmiri children, women and men who have been killed, blinded and injured; on behalf of the Pakistani nation, I demand an independent inquiry into the extra-judicial killings, and a UN fact finding mission to investigate brutalities perpetrated by the Indian occupying forces, so that those guilty of these atrocities are punished.

Sharif also referred to an arms buildup in India, and said, “The international community ignores the dangers of rising tensions in South Asia at its own peril.”

By “self-determination,” Sharif is referring to a 1951 UN Security Council resolution mandating an election to permit Kashmiri self-determination. Neither side is obeying this resolution, as neither side is willing to give up the portions of Kashmir and Jammu provinces that it controls. According to polls, even Kashmiri Muslims want an independent state, and do not wish to be part of either India or Pakistan. However, neither Pakistan nor India would ever agree to this.

An Indian official responded, “It is shocking that a leader of a free nation can glorify a self-declared terrorist (Burhan Wani). This is self-incrimination by Pakistan.”

India has accused Pakistan of being behind the violence and unrest in Kashmir, and also of being a “terrorist state” behind Sunday’s militant attack on an Indian army base in Kashmir, the worst terrorist attack in Kashmir in decades.

It is certainly possible that Pakistan’s government backing violence and terrorist attacks in Kashmir, but it’s not necessary. As I’ve been describing, the violence is “organic,” meaning that it comes from the people rather than from the politicians. India and Pakistan are returning to the massive violence of their last two generational crisis wars, India’s 1857 Rebellion and the 1947 Partition war. The News (Pakistan) and Reuters and Daily Mail (London)

Following the speech by Pakistan’s prime minister Nawaz Sharif, Pakistan Foreign Secretary Aizaz Ahmad Chaudhry held a press conference at the Roosevelt Hotel in New York. According to reports, Chaudhry demanded that no Indians be permitted to attend the press conference, and ordered the ejection of New Delhi TV’s reporter Namrata Brar.

According to the reports, the order was given “Iss Indian ko nikalo,” which means “Remove this Indian.”

Ejecting an Indian reporter from a Pakistani press conference is just one more sign of the growing xenophobic hatred between Hindus and Muslims in the region, but apparently the Pakistani action is triggering hilarity and mocking the phrase ‘Iss Indian Ko Nikalo’ in social media.

One tweet said: “Pakistani Official Said ‘Iss Indian Ko Nikalo’ to NDTV Journalist. UNESCO Has Declared It As Sarcasm Of The Year.”

Another tweeter made fun of the fact that the speaker even uttered the word “Indian”: “I strongly object this statement of Pakistan, specially the word ‘Indian’ is totally not acceptable for ndtv.”

Another made fun of the fact that not all NDTV journalists are Indian: “Iss Indian Ko Nikalo was clearly a case of mistaken identity. Where was the Indian?” New Delhi TV and Indian Express