Unrealistic expectations surround the battle to recapture Mosul from ISIS 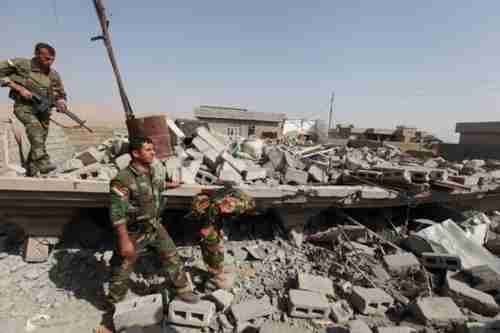 With the Iraq army’s great battle to recapture Mosul from the so-called Islamic State (IS or ISIS or ISIL or Daesh) under way since Monday, politicians and military leaders are issuing the confident statements that things are going well. The press has been reporting that the military operation is already “ahead of schedule,” which presumably means that the schedule for the first day or two was specifically designed so that the army could not fail.

The Iraqi politicians and military leaders are claiming not only to be ahead of schedule, but also to have everyone’s agreement on how the battle will go. Specifically, Turkey’s troops will not take part at all, and when the final battles are being fought, then the Kurdish militias and the Iran-backed Shia militias will wait outside Mosul, and only the Iraqi army will enter Mosul. It sounds an awful lot like a fairy tale.

The Iraqi force of 30,000 soldiers will consist of many groups of participants: the US-led coalition, Turkey, Sunni tribes, Kurds, Iran, and Shia militias. These participants all save defeating ISIS as an objective, but when the battle is over, they all want to have as much influence in Mosul and control over events as possible. To imagine that all these other participants will simply cede control to the Iraq army seems like a fantasy.

We’ve already had the following:

Maybe all will go as Iraqi leaders have planned — the participants will do as they’re told, the battle will be quick, and only the Iraqi army will enter Mosul. But there are powerful forces at play, and powerful constituents, and they won’t be stopped by a simple agreement, especially when something goes wrong. Daily Sabah (Ankara) and Reuters and Dow Jones

When the Ottoman Empire was defeated in World War I, troops from Greece, Armenia, France and Italy occupied Istanbul and partitioned much of the land previously controlled by the Ottomans. Turkey’s War of Independence began in 1919, and continued until 1923, with Turkey’s forces led by Mustafa Kemal Atatürk, the revered founder of modern Turkey.

In 1920, the Ottoman Parliament approved a document known as Misak-i Milli, or the Turkish National Oath, which laid out Turkey’s conditions for achieving peace, including a demand that “The future of the territories inhabited by an Arab majority at the time of the signing of the Armistice of Mudros will be determined by a referendum.” However, when peace was finally achieved by the Lausanne Peace Treaty in 1923, many of the demands of the Turkish National Oath were not met.

Turkey’s president Recep Tayyip Erdogan has referred to the Turkish National Oath in his speeches. According to Turkish media, he sees the treaties that ended World War I as defining new national boundaries for the entire Mideast, and he sees the current wars in Syria and Iraq as a process of redrawing those boundaries for the first time in almost a century – or as a plot by the West, the Kurds, Iran and other foreigners to divide up the Syria and Iraq among themselves.

Among the regions that Turkey was forced to give up in 1923 were parts of northern Syria and Iraq, including Mosul in Iraq and Manbij in Syria. Erdogan believes that if the Mideast boundaries are going to be redrawn, then Turkey must take part aggressively, or else be humiliated again as happened with the Lausanne Peace Treaty almost a century ago. Thus, in Erdogan’s view, Turkey must take part in the Mosul operation, and Erdogan must eject Kurdish militias from northern Syria, where Turkey has been fighting Operation Euphrates Shield.

The Kurds are aware of this, of course, as they’re trying to create their own state of Rojava in a region stretching from the Mediterranean to Iran in northern Syria and Iraq, along the border with Turkey. Erdogan has repeatedly said that anything like that would be intolerable.

Syria’s president Bashar al-Assad is now governing only a small fraction of the original Syria, mockingly called “Alawite-istan,” in the west. Al-Assad is planning destroy the city of Aleppo, killing as many of the 250,000 Sunni civilians living there are he can, using barrel bombs, cluster bombs, chlorine, phosphorous bombs and bunker bombs, as well as Russia’s warplanes. Aleppo is currently under siege, with no food or supplies able to enter the city.

Turkey has vowed to attack the city of Manbij in northern Syria, to eject the Kurds and the last of the ISIS fighters.

As it turns out, Manbij is not far from Aleppo. Some analysts are suggesting that Turkey might try to break the siege on Aleppo.

Regular readers know that Generational Dynamics has been predicting a major Mideast war. We’ve mentioned several possible scenarios how such a war might begin. Possibilities include a war between Israelis and Arabs, a war between Iran and Saudi Arabia, or a war between India and Pakistan spreading to the Mideast. Each of these wars would create a scenario that leads to a full-scale Mideast war.

Now we must add another possible scenario. Turkey has become increasingly nationalist, especially since the July 15 attempted coup, and Turkey may end up fighting Iran, Iraq, the Kurds and al-Assad, attempting to recover the territory lost by the peace treaties that followed World War I. As in the other cases, this would create a scenario that leads to a full-scale Mideast war. Rudaw (Iraq-Kurds) and Yeni Safak (Ankara) and Kurdistan 24 and Hurriyet (Ankara)