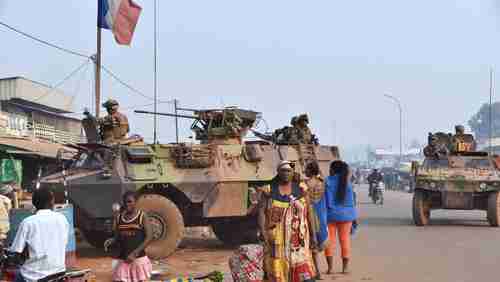 France on Monday formally ended its peacekeeping mission in Central African Republic. Using an old trick to “just declare victory and go home,” France hailed it as a success even though it has been pretty much a total failure, as violence in the country’s civil war has continued in recent months and even surged.

The French mission, known as Sangaris, was launched in December 2013, and was supposed to last for six months, until a United Nations force could take over. The UN force is known as MINUSCA, which stands for Multidimensional Integrated Stabilization Mission in the Central African Republic. The French force had 2,500 troops at its peak, and MINUSCA has about 12,000 troops.

The actions of the French troops backfired. When the Muslim Seleka troops were disarmed, the Christian anti-balaka militias “rushed into the vacuum,” and began committing atrocities in 2014, for revenge against the Selekas. Since then, both Christians and Muslims have been committing atrocities, and it’s become a full-scale generational crisis war. Thousands have been killed, and millions have been displaced.

As I’ve explained in the past, CAR’s last generational crisis war was the 1928-1931 Kongo-Wara Rebellion (“War of the Hoe Handle”), which was a very long time ago, putting CAR today deep into a generational Crisis era, where a new crisis civil war has already started.

Sangaris is pulling out far too early. Our security forces are not ready to take over. The UN forces are more and more overwhelmed.

It’s always too early. These responsibilities are above all your own.

There are still numerous armed groups fighting in CAR. The main ones are the Muslim former Seleka force, and the Christian “anti-Balaka” militias, a reference to the machetes used by the Selekas. There are also vigilante groups made up of nomadic, predominantly Muslim Fulani herders, as well as others specializing in highway robbery.

Both the French forces and the MINUSCA forces have mainly been doing their “peacekeeping” in the region around the country’s capital city Bangui. But CAR is a huge country, and much of the country has not been affected by “peacekeeping” at all. Thus there continues to be fighting among armed groups across the country.

Since the armed militias are reported to fear the French forces more than the MINUSCA forces, there are concerns that the withdrawal of the French forces will trigger a major surge in new violence. France 24 and Deutsche Welle

During the past 18 months, there have been scores of allegations of child rape and other sexual abuse by MINUSCA’s peacekeepers, though French troops have faced similar accusations.

Roland Marchal, of the National Center for Scientific Research (CNRS) in Paris, speaking on RFI, agreed that MINUSCA is not ready to take full responsibility for the peacekeeping operation, because they fail to act decisively, “they find an explanation not to move too quickly, not to move to the neighborhoods, and they procrastinate on making difficult decisions.” He says that this sends a wrong message to the CAR population, who feel that MINUSCA is not doing its job. “The crisis is deep, it’s structural, it’s systemic, so you have to make radical decisions, to integrate more the countryside,” and neither MINUSCA nor the government is willing to do that.

Marchal added that the French troops were not able to fulfill their mandate either, although they were there for three years. “Their mandate was to disarm armed groups, and have the country move to national reconciliation. But it became clear that disarming the armed groups would actually be a very hard task, and costly, and second, to undertake drastic reforms in car you need a legitimate government.”

From the point of view of Generational Dynamics, this is exactly what is to be expected, as I’ve been writing since 2013 when the crisis began. CAR is in a generational crisis war, and a generational crisis war does not until there’s an “explosive climax,” something so horrific that both sides decide to stop fighting. This could be a real “explosion,” such as the nuking of Japan that ended World War II, or it could be a massive act of genocide. Whatever it is, it must be so bad that it will be remembered for decades or even centuries, and will convince the survivors that it must “never again” be allowed to happen — and it doesn’t, as long as the survivors are alive.

We’re seeing the same kind of situation in Africa’s other generational crisis war — the Darfur war. It’s a similar story. In 2007, a UN Security Council resolution established the United Nations–African Union Mission in Darfur (UNAMID), and provided peacekeeping troops to protect the Darfurians. Millions of people who were threatened with violence were moved from their villages to camps for refugees and IDPs (internally displaced persons) controlled by UNAMID. Today, there are still more than 3.1 million IDPs living in these refugee camps, and they are still suffering from hunger, thirst, and attacks from the militias that were attacking them ten years ago. Once again, the Darfur war will not end until there’s a “explosive climax,” a massive act of genocide that will convince all the survivors to stop fighting. Until then, the war goes on. RFI (Paris) and Al Jazeera