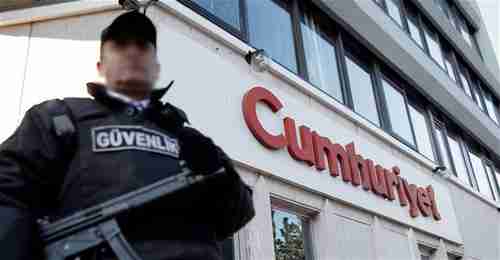 The editor and leading reporters of Cumhuriyet, Turkey’s oldest and most respected newspaper, were arrested on Saturday (Hurriyet)

Turkey’s president Recep Tayyip Erdogan never ceases to astonish as he arrests, fires, and otherwise eliminates anyone or anything that might stand in his way to increased powers that are appearing more and more dictatorial in nature.

On Friday, the leaders and several MPs of Turkey’s Kurdish Peoples’ Democratic Party (HDP) were arrested, allegedly for links to the Kurdistan Workers Party (PKK), a terrorist group that has conducted terror attacks on targets within Turkey. Eliminating members of an opposing party from Parliament gives more power to Erdogan’s own AKP (Justice and Development Party).

Hours later, a car bomb killed nine people in Diyarbakir in a largely Kurdish region in southeastern Turkey. Diyarbakir has been the site of other recent PKK terror attacks, as well.

Erdogan has been seeking additional powers for years, eliminating political opponents. He has favored a constitutional change that would further concentrate power in his hands.

Erdogan has been eliminating his opposition for years, but the July 15 aborted coup has stoked nationalism among his AKP supporters enough that he can now get away with things that might have been more difficult a few months ago.

In the past week alone, Erdogan had 10,000 civil servants dismissed, bringing the total since July to 100,000. He’s arrested mayors and conducted a war against the media.

Turkey is increasingly a badly polarized country, with Erdogan’s supporters passionately supporting his massive post-coup purge, and his opponents fearing that Turkey is headed for a dictatorship under Erdogan. It’s possible in a sense that they’re both right, and it’s also possible that Turkey is headed for a civil war. Yeni Safak (Ankara) and BBC and Washington Post and Cumhuriyet

Erdogan’s war against the media began well before the July 15 coup.

Zaman was owned by a political enemy of Erdogan, an exiled Muslim cleric Felhullah Gülen. They once were allies but in 1999 Erdogan accused Gülen of trying to overthrow the government Gülen fled to the United States in 1999, and has lived in Pennsylvania since then. Erdogan’s government has declared Gülen to be a terrorist and has asked the US government for extradition, but has been refused.

Erdogan has had tens of thousands of civil servants, academics, politicians, and media personnel fired or arrested, accusing them without proof of being linked to either Gulen or the PKK.

During the last week, fifteen more media outlets were closed, bring the total since July to about 170. The government has also crippled internet social media sources, making them unusable in Turkey.

On Saturday, Erdogan had the editor and other staff members of Cumhuriyet newspaper arrested. Cumhuriyet is a special newspaper in Turkey’s history. It was started on May 7, 1924, at the time of of Turkey’s founding by Mustafa Kemal Atatürk. Ataturk declared Turkey to be a secular state, and Cumhuriyet has since then strictly followed the secularist line.