Atheist Shoes, the German shoemakers with the words “ICH BIN ATHEIST” on their soles, have announced the launch of DAS SNEAKER, the “latest evolution” of the Atheist shoe.

“We furiously dedicate our days to not believing in god. Ok, that’s not true; we barely ever think about god, let alone about being atheists,” the company states on its website. 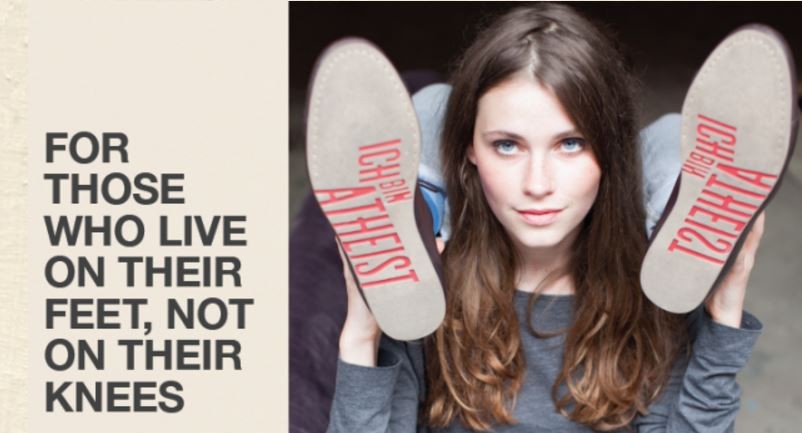 According to the site, the first ATHEIST Shoe was created as an art project. “We felt the world might be a better place, if non-believers were more open about their godlessness, so we carved the words ‘ICH BIN ATHEIST’ on a shoe sole – just as a cheeky little provocation,” they declare.

Despite the whimsy, the company works hard to propagate its worldview.

The shoemakers say they “enjoy happy, full lives without god(s)” and consider religion “a bit weird and depressing; like a silly game of make-believe that’s gone too far, threatening the things we hold most dear, like independence, reason and love.”

“The number of atheists is rapidly growing, yet we’re often passive or isolated, facing ‘god’ with just an apathetic shrug, whilst religion is organised, in your face … with symbols, rituals, community … all of which give it more power to make more of a mess,” the company proclaims.

The company owners do not think that atheism should be lived in silence, but loudly announced. To this end, they are willing to deride religious faith and ridicule believers as deluded idiots.

“Maybe our shoes will make it easier to spot the sexy, free-thinking people you like to hang with,” they say. “No more hours wasted chatting up a pretty stranger only to discover they believe some invisible, magical sky-daddy is looking down and holding a view on whether they should sleep with you or not.”

Religious people have no monopoly on moral goodness, the website states. In fact, “the heathens we know are amongst the kindest, most caring people we’ve met, each capable of being moral and good without god stories to show them how,” they say.

Despite its proselytizing of godlessness, Atheist Shoes is still willing to take believers’ money.

The website features one Christian named Emilia, who looks “super hot” when she wears Atheist Shoes.

Business is business: “You don’t have to be Atheist to wear Atheist,” the company says.