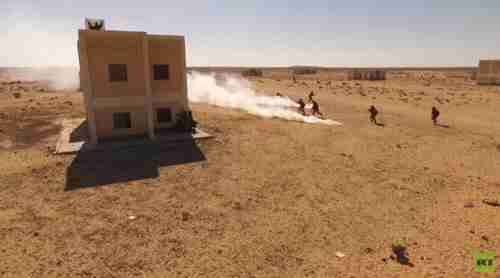 In a new Mideast realignment, Egypt’s president Abdel al-Fattah al-Sisi has said in an interview that that he is officially backing the regime of Syria’s president Bashar al-Assad.

The Mideast Sunni countries used to be allies of Bashar al-Assad, but turned against him when he unleashed his army and air force against peaceful protesters in 2011. Things really turned around in August 2011, when al-Assad launched a massive military assault on a large, peaceful Palestinian refugee camp in Latakia, filled with tens of thousands of women and children Palestinians. That massive assault turned Syria’s civil war into the beginning of a regional sectarian war.

Shia forces from Iran and Lebanon’s Hezbollah actively joined al-Assad to fight Sunni militias. Young Sunni jihadists from over 80 countries traveled to Syria to fight against al-Assad, and formed the so-called Islamic State (IS or ISIS or ISIL or Daesh). Other Sunni forces, including those from Turkey and Saudi Arabia, turned against al-Assad, and began supporting “moderate” Syrian Sunni rebels, including the Free Syrian Army (FSA).

And it’s exactly the rise of ISIS that apparently has motivated this realignment by al-Sisi. Egypt has been targeted by numerous terror attacks, especially in Sinai by the terror group called Ansar Bayt al-Maqdis (ABM – Ansar Jerusalem – Champions of Jerusalem), which changed its name to Al Wilayat Sinai (Province of Sinai) when it changed its allegiance from al-Qaeda to ISIS in 2015.

[Al-Assad’s forces are] best positioned to combat terrorism and restore stability [in Syria]. Our priority is to support national armies, for example in Libya to exert control over Libya territory and deal with extremist elements. The same with Syria and Iraq.

Some analysts are suggesting that al-Sisi’s statement of support is purely political, or only symbolic. But in fact reports indicate that al-Sisi is committed militarily as well. Several reports have indicated that al-Sisi has sent Egyptian helicopters and pilots to Syria to take part in the fighting, and that he plans to send a large deployment of Egyptian troops to Syria in January. Al-Sisi apparently believes that the best way for Egypt to fight ISIS in Egypt is to fight ISIS in Syria. Jerusalem Post and Middle East Monitor and Debka

Egypt rejects its former benefactor, Saudi Arabia, in favor of Russia and Iran

Mohamed Morsi was elected president of Egypt in 2012, along with his Muslim Brotherhood government, and quickly assumed dictatorial powers. Qatar was a big supporter of the Muslim Brotherhood, and provided a great deal of aid to Egypt when Morsi was in power. In July 2013 al-Sisi, then an army general, overthrew Morsi in a coup. That aid ended with the coup, and the slack was taken up by Saudi Arabia, United Arab Emirates (UAE) and Kuwait.

Saudi Arabia has tried to play a mediating role between Egypt on the one hand and Qatar and Turkey on the other hand, and has continued supplying aid. But with the fall in oil prices, Saudi’s economy has been in trouble, and Egypt’s economy has become desperate.

Russia has promised large investments in Egypt, and recently committed investing $11.6 billion to build up Egypt’s Suez Canal industrial zone. In return, Egypt is allowing Russia to conduct joint Egyptian-Russian military drills on Egyptian territory. There have been reports that Egypt would permit a Russian airbase on Egyptian soil, but those reports have been denied.

I always like to use the phrase “forced to choose” when analyzing situations like this. Generational Dynamics predicts that the Mideast is heading for a major war pitting Sunnis against Shias, Israelis against Arabs, and different ethnic groups against each other. When Egypt is forced to choose whether to side with Iran or with Saudi Arabia in the war, which side will it choose?

The situation is completely unclear, because the choice will be made not by al-Sisi but by the Egyptian people. And the Egyptian people are deeply split between loyalty to the Muslim Brotherhood and loyalty to a secular democracy. Al-Sisi is not as bad a genocidal monster and Bashar al-Assad, who has tortured, jailed, displaced or killed tens of millions of people, but he has tortured, jailed, displaced or killed tens of thousands of people, making the value of Egypt’s secular democracy questionable. I do not believe that Egypt’s people, when forced to choose, will choose Iran over Saudi Arabia, but I do consider it possible that there will be a split, and that part of the regional war will be a civil war among Egyptians, at least between the Egyptians in Cairo and the Bedouins in Sinai. Russia Today and ABNA (Shia) and Economist and Russia Today (19-Oct)