A new study by the Pew Research Center found that worldwide, Jews have the most years of formal education, followed by Christians, with atheists, Buddhists, Muslims and Hindus trailing behind.

The report suggested that differences in educational attainment are partly a function of where religious groups are concentrated throughout the world. For instance, most of the world’s Jews live in the United States and Israel – two especially developed countries with high levels of education.

But the study also noted that even within a given country there can be important differences in educational attainment. In sub-Saharan Africa, the report stated, Christians generally have higher average levels of education than Muslims, perhaps due to the importance placed on formal education within religious traditions or historical factors such as missionary activity during colonial times. 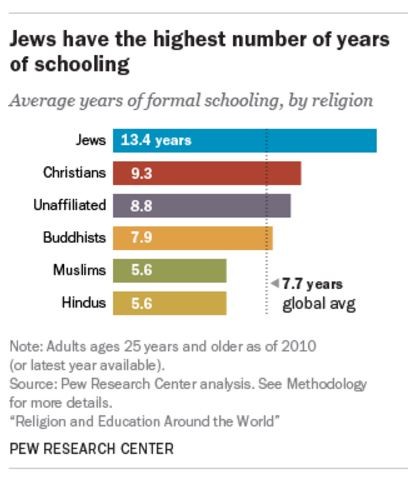 In its summary of the Pew report, the New York Times chose bury the lede regarding the educational accomplishments of Christians worldwide to underscore the situation of Christians vis-à-vis religious minorities in America, with its piece “Christians in U.S. Are Less Educated Than Religious Minorities, Report Says.”

The Pew study explained this situation by noting that religious minorities “often have more education, on average, than a country’s majority religious group, particularly when the minority group is largely foreign born and comes from a distant country.”

Immigration policies often favor highly skilled applicants, Pew stated, and “it is often the well-educated who manage to overcome the financial and logistical challenges faced by those who wish to leave their homeland for a new, far-off country.”

Of the world’s 1.6 billion Muslims in 2010, nearly four-in-ten (36%) adults had no formal schooling at all, the Pew Center reports. Globally, Muslims and Hindus have the largest shares of adherents with no formal education, and are four times more likely than Christians to have had no schooling.

In Europe, which has experienced a heavy influx of Muslim immigrants in recent years, Muslims tend to have significantly less education than non-Muslims. The biggest gap is in Germany, with Muslims having and average of 4.2 fewer years of schooling than non-Muslims (9.5 years vs. 13.7 years, respectively).

The data used in the recent report is from 2010, and the Pew Center notes that “the surge of Muslim refugees to Europe in 2015 and 2016 from countries such as Syria, Iraq and Afghanistan may have increased the number of Muslims with fewer years of schooling than non-Muslims in several European countries.”

This past year, Europe also saw a massive increase in immigrants from sub-Saharan Africa, where the formal education of Muslims is particularly low.