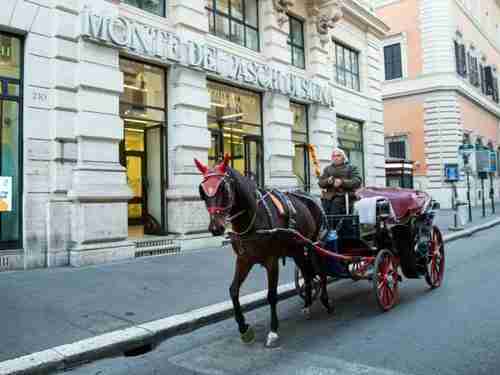 A week after Italy’s government announced that it would bail out the failing the Banco Monte dei Paschi di Siena (MPS) bank, with a “bail-in” that would put the life savings of tens of thousands of depositors at risk, the European Central Bank said on Tuesday that MPS’s financial situation is deteriorating far more rapidly than expected.

According to one financial analyst:

“It’s a national tragedy. Monte Paschi survived the Inquisition, the unification of Italy, fascism and two world wars. But it couldn’t survive the mismanagement and corruption of bankers and politicians in the 21st century.”

The government of Italy announced last week that the size of the bailout would be €5 billion, the amount needed to allow MPS to meet its immediate obligations and avoid bankruptcy. However, the ECB said that MPS’s financial position has suffered a “rapid deterioration” during the period from November 30 to December 21, now the €5 billion figure is too small. €8.8 billion will be required to get past the immediate emergency.

It’s believed that the “rapid deterioration” is being caused by run on the bank. It’s known that from June to September of this year, customers removed deposits of €6.7 billion, and it’s believed that this run on deposits is continuing, or even accelerating and spiraling out of control.

ECB rules require that if any government bails out the country’s banks, then a percentage of the bailout must come from the assets of investors who had invested in the shares and bonds issued by the bank. In most countries, that would “bail in” sophisticated investors, who would then “take a haircut.” But Italy has a special problem that many ordinary savers have invested their life savings in bonds, so that would put their life savings at risk. This situation has been the subject of intense public debate in Italy at least since June, and that would explain why depositors have been rushing to move their funds out of the bank.

Italy’s government is looking for a way under ECB rules to avoid having to “bail in” bond holders. Since MPS is still technically solvent, the plan is to take advantage of a loophole in the ECB rules by calling the cash injection a “precautionary recapitalization” rather than a bailout. However, this path limits the amount of money that the government can inject into the bank, so it’s far from clear that it will work.

“For the measures planned by the Italian government [to work], the bank must be economically healthy at its core. The money cannot be used to cover losses [that are] already expected. All this must be carefully examined. …

These [rules] aim to protect taxpayers in particular and keep responsibility on investors. Government bailout is only meant to be a last resort, that’s why the bar is high.”

Italy’s rescue plan requires approval by both the EU and the ECB.

Following the money, Sao Tome and Principe switches allegiance from Taiwan to China

It’s often a question of money. China would like Taiwan to be recognized by as few countries as possible, and so China will offer financial aid and investments to a country willing to switch. It sometimes gets into a bidding war, but China is much wealthier and always wins such battles.

Other countries, including The Gambia, Malawi, and Senegal, have in recent years broken off relations with Taiwan, in the hope of enjoying financial largesse from China. China has not always been willing to establish relations with these countries because of a long-standing “diplomatic truce” between China and Taiwan, designed to prevent countries from playing China and Taiwan against each other. However, China abandoned the diplomatic truce after this year’s election as president of Tsai Ing-wen, who is lukewarm to the “One-China Policy” that makes Taiwan a province of China.

It’s not just China who is playing this diplomatic game. After Russia invaded Georgia in 2008, it declared two Georgia territories, South Ossetia and Abkhazia, to be independent nations until Moscow’s protection. Only five countries sided with Russia in recognizing at least one of the two territories as independent. In 2011, Tuvalu recognized Abkhazia and South Ossetia in return for “promising areas for bilateral cooperation [with Russia], including trade, fisheries and education.” However, Tuvalu switched sides in 2013, for a reason that was not explained. Med Africa Times (Switzerland) and China Post (Taiwan) and New Republic (2-Apr-2014)