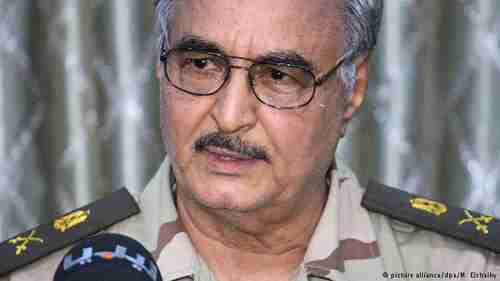 According to a news report from Reuters, both American and Egyptian sources are saying on background that a 22-member Russian special forces unit and drones have been deployed to the Sidi Barrani airbase in Egypt, about 60 miles from the border with Libya. The Egyptian sources added that Russian military aircraft in February had flown about six military units to an Egyptian seaport base in Marsa Matrouh before the aircraft continued to Libya about 10 days later.

Both Russia and Egypt are known to support Khalifa Haftar (or Hifter), a “renegade” leader who controls much of eastern Libya. Hafter visited the Russian aircraft carrier Admiral Kuznetsov when it was leaving the Syrian coast for Russia. An earlier report confirmed that a force of several dozen armed private security contractors from Russia had operated in Libya in support of Haftar. Analysts are suggesting that Russia wants to infiltrate Libya in the same way that Russia infiltrated Ukraine and Syria.

There are no Russian special forces in Sidi Barrani. Certain Western media have been stirring the public with such mud-slinging from anonymous sources for years.

So what’s the truth here? What we have a history of what happened in Ukraine and Syria, where almost every statement that came from the Russia and Russia’s president Vladimir Putin seemed to be a lie.

Russia lied about invading east Ukraine when it had Russian troops in east Ukraine. Russia lied about invading Crimea, and Putin said Russia had no intention of annexing Crimea, but then annexed Crimea a few days later and gave medals to the military officers who had invaded Crimea. Later, in a televised interview, Putin bragged that he had ordered the invasion and annexation of Crimea weeks before it occurred, and then lied about it. Russia also lied after shooting down a passenger plane over Ukraine.

For Syria, Russia lied about Syria’s president al-Bashar Assad’s use of Sarin gas on his own people, Russia lied about the purpose of its military intervention into Syria as being to attack the so-called Islamic State (IS or ISIS or ISIL or Daesh).

Even worse, Russia hired hundreds of paid internet trolls to attack and harass people like me who write about what Russia was actually doing in Ukraine and Syria.

So now we may be seeing the same thing happen all over again. Perhaps, as Jean-Claude Jüncker famously said, “When it’s serious, you have to lie,” but like Aesop’s fable about the boy who cried “wolf,” Russia has lied so many times that they won’t be believed even if, by chance, they happen to be telling the truth. Reuters and Deutsche Welle and Reuters and Sputnik News (Moscow) and Aesop: The Boy Who Cried Wolf

Libya’s government under Muammar Gaddafi was relatively stable until the “Arab Spring” of January 2011, which was triggered by the death of a Tunisian food vendor, resulting in violent protests in Tunisia, Egypt, Yemen, and then in Libya. By February, the bloodbath in Libya had spread from Benghazi and Tobruk in the east to Tripoli in the west. Muammar Gaddafi declared war on the protesters. He threatened to shoot to kill protesters and said he would crush any enemy. By April, hundreds of thousands of refugees from Libya were pouring into neighboring countries, and thousands were crossing the Mediterranean to reach Italy. The Arab League asked the West to intervene, as Gaddafi was threatening a bloody massacre in several cities, especially Benghazi. The West did finally intervene, and ousted Gaddafi, leaving the country at the mercy of warlords and al-Qaeda.

Today there are several governments in Libya:

Fighting and violence have been increasing in both the east and the west. Thousands of armed men from all sides have been converging on Libya’s main oil shipping terminals. Some of the bloodiest fighting in three years is going on now, mainly to gain control of oil fields. The fighting may cause global oil prices to rise.

Officials in America and Europe suspect that Russia is planning to take advantage of the chaos in Libya and take control of the country by acting as it did in Ukraine and Syria.

Marine Gen. Thomas Waldhauser, head of U.S. Africa Command, testified to Congress last week: “Russia is trying to exert influence on the ultimate decision of who becomes, and what entity becomes, in charge of the government inside Libya.” Italian politicians say Russia’s mounting interest in Libya appears be part of a larger bid to rekindle Soviet-era influence in the Middle East and North Africa.

Russia’s relationship with Haftar is the result of a very simple equation. Russia backs Egypt, Haftar’s main supporter. General Haftar has declared war on terrorism and this coincides with Russia’s main objective in the region: wiping out the terrorist threat posed by the Islamic State. …

Russia is not sending its troops to help Haftar and is unlikely to do so in the near future. We are rather relying on private military contractors and mercenaries. We are already using contractors in Syria, where they are suffering serious losses, because they are doing the real fighting instead of Russian servicemen. Private contractors are very convenient because they have no political strings attached.

Contractors are cheaper [than servicemen] and we need to use our financial resources as best as we can. With the conflict in Donbass simmering, Crimea, the war in Syria still under way, Russia doesn’t have the appetite or the resources to go into Libya,” Felgenhauer said. “Russia is keen on establishing a foothold in Libya and have some influence there, but committing resources is a different matter.

Felgenhauer did not deny reports that Russia is negotiating with Egypt to build a Russian military base in Egypt on the border with Libya, in return for providing economic aid to Egypt. Egypt Independent and Military Times and VOA and Al Jazeera and Hurriyet (Ankara)

My web site’s e-mail server was down for much of the last two days. Any e-mail messages sent to me should be re-sent. Sorry for the inconvenience.