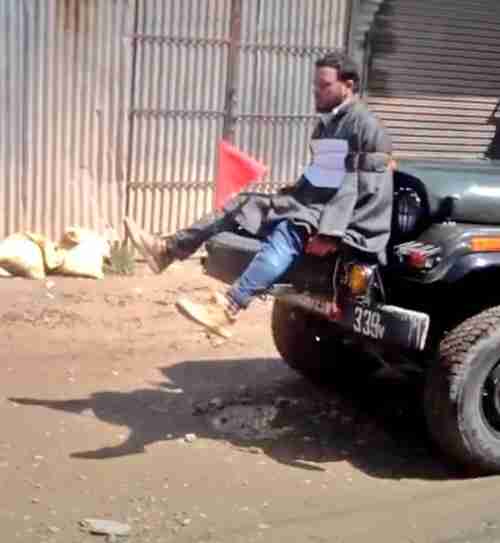 Although the violence in India-governed Kashmir has settled down a bit since the large surge that accompanied the elections on April 9, there is still simmering below the surface a great deal of anger – certainly on the part of the Muslims, and almost as much on the part of the Indian security forces.

The picture above is a frame from a video that went viral. It shows a Kashmiri man that the security forces tied to the front of a jeep as it travels down the street. The reason given for tying the man to the jeep was to discourage Kashmiris from throwing stones at the jeep. In the video, a warning can be heard saying that stone pelters will meet the same fate (being tied to a jeep).

The entire video can be seen at this Twitter address.

There are many videos from Kashmir being posted these days, mostly by separatists who want to portray alleged violence by security forces.

However, security forces have also been posting videos. One from polling day on April 9 shows security officers being pelted by stone throwers, and then a young man whacks a security office over the head, causing his helmet to come off and roll down the street. The young men change “Go India, go back.”

This entire video can be seen at this Twitter address.

As I wrote earlier this month, from the point of view of Generational Dynamics, Kashmir is replaying previous generations of violence according to a fairly standard template.

India’s previous two generational crisis wars were India’s 1857 Rebellion, which pitted Hindu nationalists against British colonists, and the 1947 Partition War, one of the bloodiest wars of the 20th century, pitting Hindus versus Muslims, following the partitioning of the Indian subcontinent into India and Pakistan.

Now, as the survivors of the 1947 Partition War have almost all died off, leaving behind younger generations with no fear of repeating past disasters, Kashmir is showing signs of repeated the violence of 1857 and 1947.

Stone-throwing incidents started to become frequent after July 8 of last year, when Burhan Wani, the leader of the Kashmir separatist group Hizbul Mujahideen, was killed by Indian police fire. There was a big surge in violence that continued almost daily until Winter. Security forces responded harshly with pellet guns, with the result that 1,000 people lost their vision in one eye and five were blinded. Thousands of youths have been arrested.

Now Winter is over. It is still only April. Summer does not even begin until June 21, and then there are three more months until the Fall. The most likely scenario is that violence is going to continue throughout the summer. At some point, the violence is going to spiral into full-scale rebellion, just as happened in 1857 and 1947. As the saying goes, history doesn’t repeat itself, but it rhymes. Mumbai Times and Deccan Chronicle and DNA India

Signs grow in media that Indians are beginning worry about Kashmir

My impression, after writing about the Kashmir issue off and on for years, is that Indians are in a state of almost total denial about what is happening in Kashmir. In fact, just a couple of months ago, I spoke to an acquaintance who had been born in Kashmir and lived there as a child. I asked him what he thought about the growing violence in Kashmir. He said that it was nothing – it had happened before in the 1990s and would die down again. Of course, he did not understand that in the 1990s there were still plenty of survivors of the 1947 war still around who made sure that it did die down.

Based on my readings of India’s media, I’m seeing something different, signs that Indians are becoming aware of how dangerous Kashmir is becoming, and that things might get a great deal worse.

P Chidambaram, a member of the Congress party, which is the opposition to the current government of Narendra Modi, said:

My position on Kashmir is well known. I have been writing, speaking that we are losing Kashmir… The path that the government of Jammu and Kashmir and the central (Indian) government have taken is a perilous path. This path will not lead to any kind of peace or any kind of engagement with the people…

An editorial in the Hindustan Times acknowledges Chidambaram’s statement, and says: “The Narendra Modi government wants a new approach and has settled on a policy that combines harsh crackdowns on agitating youth and initiatives that undermine mainstream parties.”

According to the article, New Delhi politicians are still in a state of continued denial:

The Valley is seething – the deaths of teenagers and the presence of those blinded by pellet guns are a constant spur to maintain political purity and distance from India and those working for its institutions.

Ordinarily, this would alarm Delhi as there’s a palpable loss of control and India’s image abroad at stake. But the Centre appears unperturbed and is maintaining its aggressive line. There has been no real regret about civilian casualties; instead home minister Rajnath Singh has ominously suggested that India “will see a transformed Kashmir in a year. No matter how the change occurs, one thing is certain, that there will be a change in Kashmir in a year’s time.” He also said those pelting stones “will have to face the consequences.” In February, army chief Bipin Rawat warned youth in Kashmir saying “those who obstruct our operations during encounters and are not supportive will be treated as overground workers of terrorists. They may survive today but we will get them tomorrow. Our relentless operations will continue.

These quotes from New Delhi officials are totally delusional and will lead to disaster. However, they show how strong the sense of nationalism still prevails over common sense.

An editorial in Indian Express says the following:

It is an unmistakable sign of the corrosion of Indian democracy that an odd combination of illusions and nauseating bravado is being spun in Delhi around the grim political situation in Kashmir. Every element of Indian policy in Kashmir lies in tatters. And yet, instead of asking forthright questions, our denial goes deeper. Kashmir now seems to be going from a deep and violent conflict to a state where there seems to be a death wish all around: Security forces with no means to restore order other than by inflicting death, Indian nationalism now more interested in showing machismo than solving real problems, increasingly radicalized militancy with almost a touch of apocalyptic disregard for life, foreign powers fishing in troubled waters, scores of young men and children even, who are making a statement that courting death seems a better option than what they regard as suffocating oppression. They are all feeding off each other.

This article drew a number of angry, nationalistic comments. Here’s a sample:

What is different from the past, as far as I can tell, is that there is a debate emerging between the nationalistic view that “Kashmir is ours, and separatists should be treated harshly,” versus “Nothing is working, and we should try something desperate like ‘engaging with all stakeholders.'”

From the point of view of Generational Dynamics, no solution exists to the growing violence in Kashmir, and the same kind of violence will be repeated as occurred in 1857 and 1947. At some point, possibly this summer, something violent will occur to force Indians out of their state of denial, and into a state of panic. At that point, cooler heads may or may not prevail. Kashmir Media Service and Hindustan Times and Indian Express