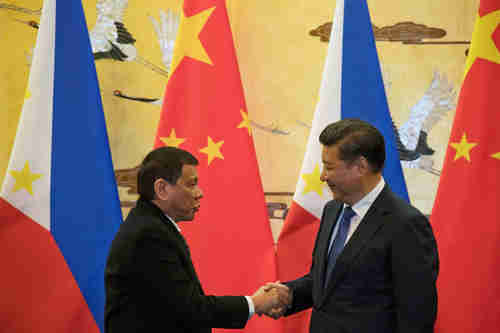 This week’s meeting of the Association of Southeast Asian Nations (ASEAN) is generating controversy because the draft statement to be issued makes no mention of China’s militarization of the South China Sea or the dramatic ruling by the United Nations Permanent Court of Arbitration (PCA) at The Hague declaring China’s claims and activities in the South China Sea to be illegal.

The person who is going easy on China is this meeting’s rotating chairman, who this year is Philippine’s president Rodrigo R. Duterte. In October of last year, Duterte went to Beijing and met with China’s president Xi Jingping. In exchange for receiving millions of dollars in investments and loans from China, Duterte agreed to cancel some agreements with the United States and to forget about China’s illegal activities in the South China Sea.

Last year’s ASEAN statement emphasized the importance of “non-militarization and self-restraint in the conduct of all activities, including land reclamation.” But Duterte’s watered-down statement will drop references, or even allusions, to China’s construction of artificial islands and the military hardware it has placed on them. Instead, the statement says:

We reaffirmed the importance of enhancing mutual trust and confidence, exercising self-restraint in the conduct of activities, avoiding actions that may further complicate the situation.

The Philippine people view the United States far more favorably than they do China, and so Duterte’s flip-flop on China has never been particularly possible. Duterte’s own defense secretary Delfin Lorenzana has vocally expressed criticisms of China’s activities, especially as it seemed that China plans to build another military base on the critical Scarborough Shoal.

Of course, Duterte has no answer to Rosario’s questions. Rosario says that the Philippines should take full advantage of last year’s PCA ruling, and make sure that international law is upheld in the region. According to Rosario:

Philippine interests are best promoted when all states, of any size or power, adhere to the commonly agreed upon standards that govern countries’ rights and relationships. International law, in my view, is the great equalizer. Through it, a country of 100 million people is the equal of one that is more powerful, and that is more than ten times its size.

As this year’s chair of ASEAN, the Philippines has a unique and an important opportunity to dwell on how we can work with our neighbors to ensure that this rules-based order succeeds. The purpose of our cooperation should go beyond maintaining friendly ties; we must also cooperate to ensure that we live in a neighborhood where countries follow the rules and uphold their commitments.

Duterte’s proposed statement may yet be changed before it is officially issued by ASEAN on Saturday. Other ASEAN members whose territories in the South China Sea that China is confiscating include Malaysia, Vietnam, and Brunei. They may pressure Duterte to make a more aggressive statement. However, Cambodia, which also receives a great deal of money from China, would fight such a move and force a compromise similar to Duterte’s appeasement statement. Manila Times and Reuters and Rappler (Philippines)

There is a new code phrase used by people who want to appease China. The phrase is “Code of Conduct” or CoC. The idea is to negotiate with China to agree to a code of conduct in the South China Sea, so that everyone can live in peace. It is totally laughable to believe that China would agree to any code of conduct, or to follow any code of conduct it agreed to, but calling for a CoC is the easy solution for someone who doesn’t want to confront China.

There is an obvious comparison to the United States relation with North Korea. For decades, the US appeased North Korea, hoping that appeasement could end its development of nuclear weapons. It has not worked, as North Korea is now on the verge, within perhaps a couple of years, of developing a nuclear-tipped ballistic missile that could reach the United States.

The policy of appeasing North Korea has been a complete failure, and now under President Donald Trump, the policy is being reversed to be a lot more confrontational.

Duterte’s policy of appeasement toward China is not going to work either. China is determined to continue with its heavy militarization of the South China Sea and, perhaps within a couple of years, will have the entire South China Sea under its military control.

The US also has a policy of appeasement toward China. As regular Generational Dynamics readers know, China has been aggressively preparing for full-scale war with the United States for years. They have developed one nuclear ballistic missile system after another, and manufactured perhaps hundreds of those missiles, with no other purpose than to destroy American cities, military bases and aircraft carriers. These developments have been deliberately planned, and it is clear that China plans to attack at a time of its own choosing. The US has chosen to ignore this vast military buildup directed at us, just as Duterte is ignoring China’s military buildup in the South China Sea.

Appeasement as a strategy does not work and leads to war. North Korea is developing is nuclear-tipped missile, China is continuing to militarize the South China Sea and also to develop missile systems targeting the United States, and in 1938 Britain’s prime minister Neville Chamberlain’s appeasement of Adolf Hitler did not prevent World War II.

The problem is that the opposite of appeasement also does not work, and also leads to war, perhaps more quickly. If Neville Chamberlain had declared war on Nazi Germany instead of declaring “peace in our time,” then WW II would simply have occurred sooner. Donald Trump is currently discovering that there is no credible way to prevent North Korea’s development of a nuclear-tipped intercontinental ballistic missile without a major war that would devastate South Korea. The Philippines could do nothing to stop China’s huge military buildup in the South China Sea, so Rodrigo Duterte decided to make the best of it by getting some money out of the situation. If you are going to die anyway, you might as well get 30 pieces of silver first. And no one even wants to think about some alternative to appeasement of China in view of that country’s evident plans for a preemptive attack on the United States.

There’s a halfway measure: sanctions, but that has not worked, either, in the case of North Korea, which has survived enormous sanctions.

As with so many problems that I’ve written about over the years, these problems have no solution. In each case, the rogue countries will continue that path to full-scale war, and other countries will use appeasement because there’s no other way to proceed. Finally the war begins, causing millions or billions of deaths, and it ends with an international conference that issues a statement saying “Never again,” but it always happens again. Inquirer (Manila) and Philippine Star