WASHINGTON – On Sunday, dozens of Iranian expats, Americans, American-Iranians, Canadians, and Canadian-Iranians gathered in front of the White House at Lafayette Square Park to vocalize their support for President Donald Trump and urge him to be the leader to help usher in a free Iran.

“Mr. President, we endorse you. We endorse your right action against chemical bombing in Syria. We endorse your foreign policy in the Middle East,” Shahram Sanpanah of Canada said. “We thank you for the beautiful message on the Iranian New Year, Nowruz, and we appreciate you separating Iranian people from the Islamic regime. We have been waiting more than 38 years to have a president in the White House who understands what is happening in Iran.”

The majority of Sunday’s rally attendees were constitutional monarchists.

He said the Islamic regime of Iran is responsible for the chaos in the region and “they handed our country over to Russia. As you know, the Iranian people always look to the West and never do they like Russia. Never. Iranians have had the best relationship with Americans until the Islamic regime took over our country,” Sanpanah said. “Mr. President, we want you to support the freedom fighters in Iran to stand up against this brutal regime and ensure that they can kick out this terrorist regime out of Iran in the near future. Down with the Islamic Republic of Iran!”

A yellow banner at the event read, “Best weapon against the regime in Iran is the people of Iran.” Another sign read, “No more Obama’s policy: Help us put an end to radical Islam.” Others held up signs which read, “Free Iran” and “Free press in Iran.” 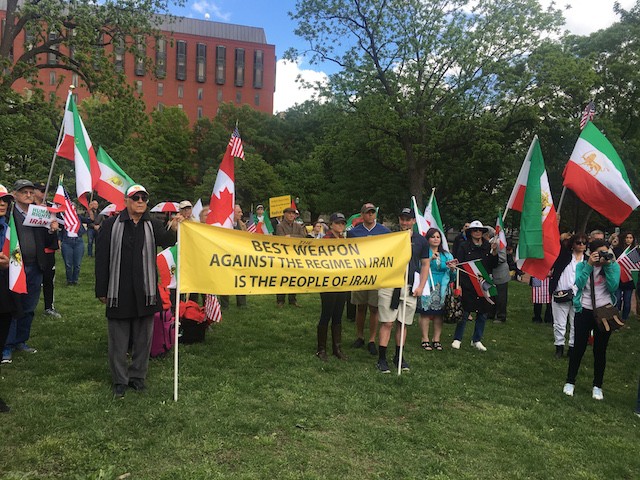 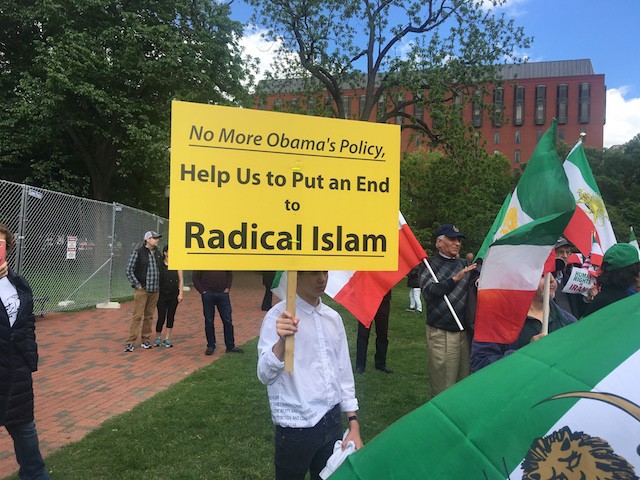 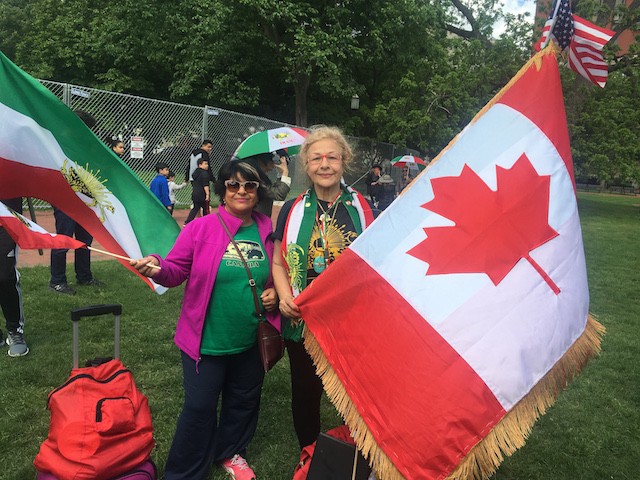 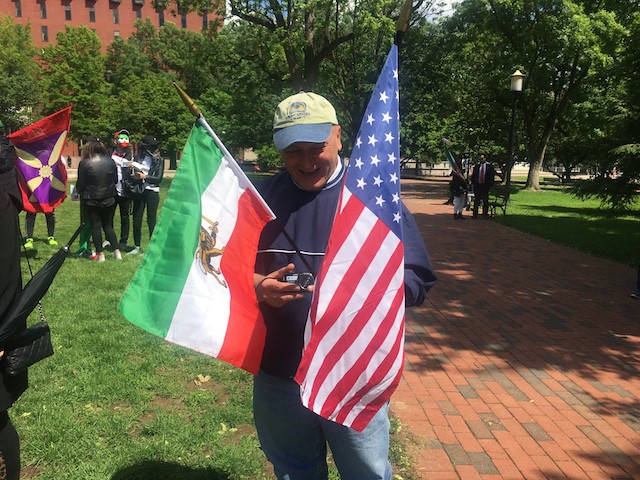 Several flags of the Derafsh Kavian also flew in the wind. It was flown in honor of the great kings of the Persian empire. The Derafsh Kavian is the oldest known flag ever used, reportedly first hoisted by a blacksmith named Kaveh, in Shahnameh, who led the overthrow of a tyrannical king, according to the 8th-9th Century Shahnameh text. 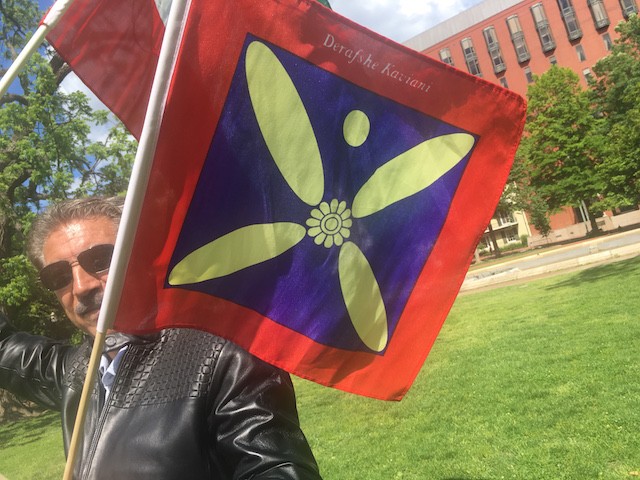 Amir Kamrani, a D.C.-based Middle East and counterterrorism scholar, told Breitbart News, “Islamist ideology rejects the idea that governments get their legitimacy from the consent of the people. They believe that their legitimacy comes from God through the enforcement of their own version of Sharia Law. This Islamic ideology is the founding bloc of ISIS (the Islamic State of Iraq and Syria), al Qaeda, and the Islamic regime of Iran.” Kamrani noted that “They believe that all power belongs to them and the people are not to be trusted with the power to determine their own future and destiny.” 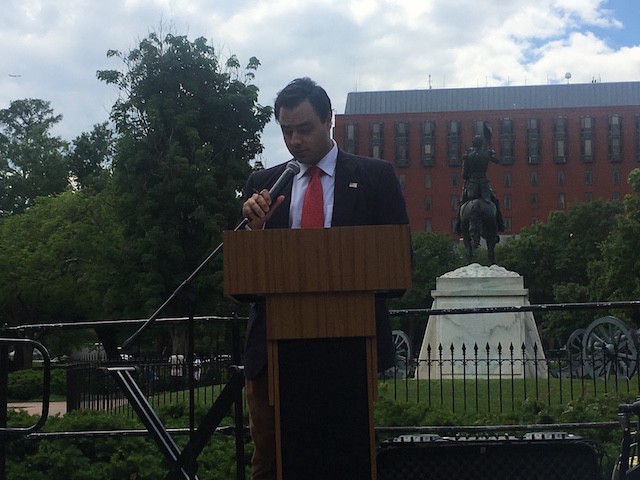 Kamrani noted that such an ideology is fundamentally at odds with American values and poses a threat to the way of life in the United States, similar to the threat that Communism posed in the 20th century. “President Trump promised to take a fair stance against these enemies of freedom, unlike President Obama who refused to take such a firm stand and even refused to utter the words ‘radical Islamic terrorism,’ ” Kamrani said. He said a containment strategy is not enough and called it “meaningless.” He added, “Such ideologies cannot be contained, they must be eliminated, and we must actively confront them. President Trump is determined to eliminate ISIS.”:

I want to encourage President Trump and the international community to hold the Islamic republic regime of Iran responsible and hold them accountable. And I’m confident that President Trump understands the collapse of the Islamic republic and the emergence of a secular democracy in Iran can only be done through the Iranian people. And the support of the United States is a crucial key in this change.

Bahman Roudgarnia, of Toronto, came with a dozen other Canadians to attend Sunday’s rally. “We have been part of this from the beginning. We are here to voice our discontent with the Iranian regime.” Asked to respond to the upcoming Iranian elections, Roudgarnia said, “that’s just a show that’s put on by the regime every four years… we don’t care about the results. We’ve never cared about it.” He said he believed it was “quite probable” that a scenario similar to the 2009 Green Revolution could unfold in Iran once again. This time, however, he said he believes President Trump will support the Iranian people.

Feri Akrami, who lives in Virginia, told Breitbart News, “I came to America 40 years ago for freedom. I would like that Iran will have freedom and everyone will feel comfortable and have a good life,” Akrami said.

Sohrab Nabavi, who organized the event, told Breitbart News that Sunday’s rally coincided with a series of coordinated rallies throughout the world. 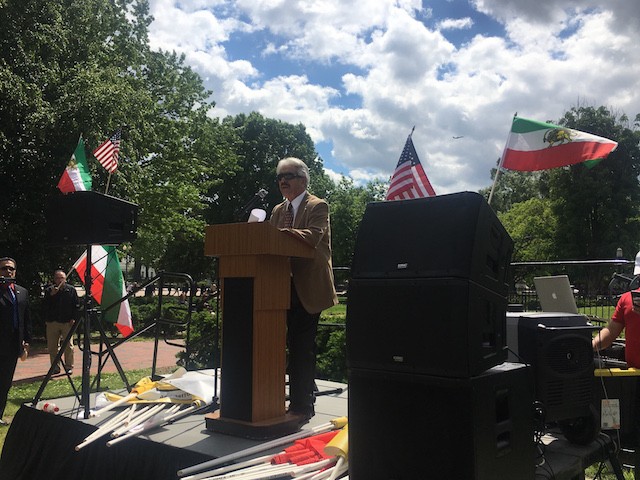 When he took the stage, he told the crowd that he recalled Trump said he was going to “drain the swamp,” but noted, “We still see some members of NIAC still in your administration. Hopefully soon, we won’t see them there anymore.” The National Iranian American Council (NIAC) gained a strong foothold in the White House under the Obama administration and was able to position itself as the representatives of the Iranian people in America. However, the majority of Iranians in the United States, and particularly members of the expat community, do not see NIAC as representing their cause.

He added, “I wish, with the help of the international community, one day Iranian people will get back their dignity. I wish one day, with the help of international community, we will be able to elect the kind of government that we want.” Nabavi added, “I personally believe the constitutional monarchy is the best democratic system for Iran;” a system in which “the prime minister will be elected every four years, for the people, by the people.”

He told Breitbart News that he was arrested in Iran and received a death sentence because he helped organize a rally in Tehran against Khomeini. He fled to the United States. “Since then, I’m trying to do my best as one citizen of America and Iran to gather people for freedom. Right now I believe in Trump. I believe Trump is going to give us a chance; not just as an American, but also as an Iranian. I believe he’s the people’s president. I campaigned for him and so far he’s stood by his promises.

Asked how he feels about Trump’s executive order of a 90-day temporary visa ban he said, “I’m looking at it as an American citizen, we want to be safe here, and as an Iranian-American, I know the source of terrorism comes from there. So I have a right to be concerned.”