India declares nationwide prohibition on sales of cattle for slaughter 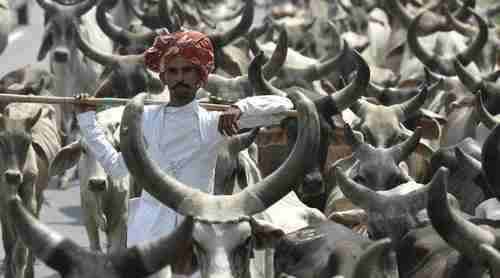 In a move that critics say will devastate the economy, India’s Environment Ministry on Friday issued regulations banning the sale of cattle, when the intent is slaughter or religious sacrifice. Cattle are defined as bovine animals, including bulls, bullocks, cows, buffalos, steers, heifers and calves and includes camels.

The new regulations are seen as a move by prime minister Narendra Modi to satisfy demands from his Hindu nationalist base, who have been calling for a ban on all cow slaughter across the country. Banning cow slaughter is seen as targeting Muslims, who kill cows for meat, a practice that’s followed by people of all faiths in almost all countries of the world.

An analysis in the Hindustan Times points out that only 30 percent of cattle slaughtered in India is used for meat – either local consumption or export – while 70 percent of the carcass is traded for industries that deal in dozens of items for daily use, including buttons, soap, toothpaste, paint brushes and surgical stitches. India exported 2.4 million tonnes of buffalo meat to 65 countries in 2014-15, or 23.5 percent of global beef exports, worth about $4.6 billion.

The hardest hit, according to the analysis, will be rural farmers who use cattle for ploughing. When a bull or bullock is no longer productive, the farmer sells it for 40% of its original purchase price, and uses the money to purchase a replacement animal. If the farmer is unable to sell the unproductive animal for slaughter, then the farmer will lose this money and, even worse, will not be able to slaughter the animal himself, so will have to continue feeding it. Hindustan Times and News 18 (India) and Times Now (India)

More violence in Kashmir after another militant leader is killed

Indian security forces in India-governed Kashmir killed a prominent militant commander, Sabzar Ahmad Bhat, and a fellow militant, along with a civilian, early on Saturday after a gunfight that lasted for hours. The death of the militants triggered widespread protests across Kashmir Valley, and the imposition of new curfews.

Hizbul Mujahideen is a separatist terror group of Muslims demanding independence for India-governed Kashmir, and that it be permitted to merge with Pakistan-governed Kashmir, so that all of Kashmir is under Pakistan control.

As news of the death of Bhat spread, there were widespread protests by local citizens, as thousands of people began heading to Bhat’s home village Tral, about 30 miles south of the provincial capital Srinagar, and pelting security forces with stones. According to some reports, 80 people were injured. Authorities imposed restrictions in parts of Kashmir Valley and suspended mobile internet services.

There is a romantic back story to Bhat. Bhat was a childhood friend of Burhan Wani. Bhat reportedly turned to militancy after the family of a girl he loved spurned his marriage proposal and ended the relationship. Rising Kashmir and AP and News 18 (India)

The killing of militant commander Sabzar Ahmad Bhat represents a change of strategy by India’s army in Kashmir, according to Major General BS Raju, who heads the army’s Victor Force in south Kashmir. Raju considers the death of Bhat to be an outstanding success. Instead of simply applying techniques to pacify protesters, he says that “We are going after the leaders.”

According to a news analysis in FirstPost:

That was the strategy of then BSF IG Ashok Patel, who handled militancy at its worst, between 1990 and 1993. Patel targeted commanders based on specific intelligence. He laid cordons at specific locations on the basis of that information.

The strategy worked well. The heads of major militant organizations, including Muslim Janbaz Force, Jammu and Kashmir Liberation Front, Students Liberation Front, Al Umar and Hizbullah were all rounded up (arrested) by April 1992.

That only left the largely rural-based Hizb in the field. It was in December 1992 that Pakistan allowed the Lashkar-e-Toiba and the Afghan-based Harkat-ul Mujahideen to Kashmir. They dominated from then until that round of militancy ended around a decade ago. The new militancy emerged over the past five years.”

This is a mistake made by everyone – politicians, security forces, ordinary people. They remember what happened in the 1990s, and they assume that if they try something that worked well at that time, then it will work well again.

This assumption is completely wrong. The 1947 Partition War was one of the bloodiest wars of the 20th century, pitting Hindus versus Muslims, following the partitioning of the Indian subcontinent into India and Pakistan. In the 1990s, the people in charge of both the Indians, the Pakistanis and the Kashmiris were all traumatized survivors of that extremely bloody war, and while they might tolerate some peaceful protests and stone-pelting, they would do everything possible to prevent a repeat of what happened in 1947. It’s ironic, but in the 1990s the Hindus and the Muslims would have been cooperating with each other, whether consciously or by instinct, to keep any protests from getting out of hand.

Those traumatized survivors are gone now, and the people in the younger generations who are in charge now have absolutely no clue what happened in 1947, nor what’s going to be happening to them in the near future.

So now in 2017, Indian army command BS Raju is going to duplicate the 1992 strategy of Indian army commander Ashok Patel, and he expects it work the same way. There’s absolutely no reason to believe that. In fact, killing militant commanders in a generational Unraveling era like the 1990s, may work to convince those traumatized survivors to call off further protests rather than risk further bloodshed, but in a generational Crisis era like today, there is no real fear of further bloodshed on either side, with the result that tit-for-tat escalations can lead to full-scale war.

As I’ve written several times, from the point of view of Generational Dynamics, Kashmir is replaying previous generations of violence according to a fairly standard template. India’s previous two generational crisis wars were India’s 1857 Rebellion, which pitted Hindu nationalists against British colonists, and the 1947 Partition War, one of the bloodiest wars of the 20th century, pitting Hindus versus Muslims. Kashmir is at the heart of a re-fighting of those two wars. First Post (India)