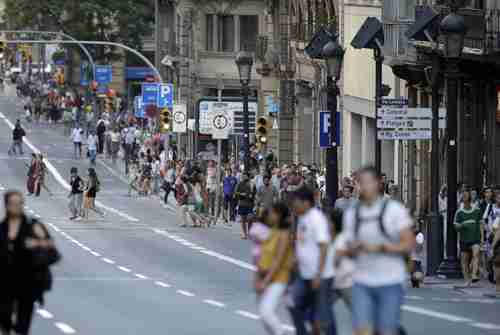 People walk down a main street on Thursday in Barcelona, where a van mounted the sidewalk and ploughed into people. (AP)

Thirteen people died and over 100 were injured in a terror attack on Thursday at 5:30 pm, when a van ploughed into crowds strolling down the street in Barcelona’s famous Las Ramblas area, a top tourist destination.

Authorities believe that the Barcelona attack is linked to an explosion hours earlier in Alcanar, about 125 miles south of Barcelona. The house was apparently a bomb-making factory, filled with bottles of propane and butane. The explosion completely destroyed the house, killing one person and leaving seven more with injuries.

Another terror attack in Cambrils, a coastal town south of Barcelona, was thwarted by police early Friday, when four alleged attackers were killed and another was seriously injured. The fact that all in all there were three attack sites indicates that this was bigger than a lone wolf attack, and considerably more complex.

Motor vehicles are being increasingly used as weapons of terror because they are easy to use, require no training, and are impossible to detect in advance by authorities. The most recent motor vehicle attack occurred on Saturday in Charlottesville, Virginia, by neo-Nazi James Alex Fields Jr., who drove his car into a crowd of protesters, killing one an injuring 19 others.

In the last three years, deadly car-ramming jihadist attacks have occurred in several European cities, including Paris, London, Stockholm, Berlin, Nice France, and Nantes France. It’s feared that the number of these attacks is going to increase. AP and BBC and CBS News

The so-called Islamic State (IS or ISIS or ISIL or Daesh) immediately took credit for the Barcelona attack through its Amaq public relations agency:

The perpetrators of the Barcelona attack are soldiers of the Islamic State and carried out the operation in response to calls for targeting coalition states.

ISIS has a policy of simply taking credit for any terrorist act, even when it had nothing to do with it, and there’s no reason to believe that ISIS did anything to support or direct the Barcelona attack.

However, ISIS has been using its online sites to encourage lone wolf attacks by individuals against the own home countries, especially the “coalition states” mentioned in the Amaq message. These are countries in the US-led coalition attacking ISIS in Syria.

ISIS is under attack in both Iraq and Syria, and has been almost completely expelled from Mosul in Iraq, and will soon be expelled from Raqqa in Syria. As they have been losing ground, they have changed their online strategy. They used to post videos encouraging young jihadists from around the world to come to Syria and join ISIS, but that message is no longer viable. Now their online videos are almost exclusively targeted at encouraging young jihadists to attack their home countries, with a car attack advocated as one of the best terror techniques, because it is easy to do, requires no training, and is almost impossible to detect in advance by authorities. Business Insider and BBC and AP

Related: Iraqi forces are just ‘tens of meters’ away from retaking Mosul from ISIS (09-Jul-2017)

From the point of view of Generational Dynamics, it has been clear for some time that North Korea is not going to stop nuclear and ballistic missile development until they have a nuclear ballistic missile capable of reaching the United States mainland. North Korea’s child dictator Kim Jong-un has repeatedly ignored sanctions and aid proposals by the West, hoping to stop the development. But Kim is thought to believe that once that point has been reached, his regime will be safe from attack, since no one would want to risk nuclear retaliation.

Many people have suggested that the US should launch a cruise missile attack on North Korea to take out their nuclear and ballistic missile development sites. Once again, from the point of view of Generational Dynamics in this generational Crisis era, it is clear that Kim is determined to forestall this option, and has done so with hundreds of artillery batteries on the boundary with South Korea, within targeting range of the South Korean capital city Seoul.

Full disclosure: As I’ve described in the past, I’ve worked with Steve Bannon off and on for several years in the past, both on his movie “Generation Zero” and when I was cross-posting articles on the Breitbart National Security site, and I know personally that he is an expert on military history and world history, and also has an expert understanding of Generational Dynamics and generational theory.

So it is significant that Bannon appears to agree with the Generational Dynamics analysis of the situation. In an interview with American Prospect magazine, Bannon said:

In a recent analysis on White House policy in Korea, I quoted South Carolina Republican Lindsey Graham, who said that war with North Korea is “inevitable,” and:

However, both Defense Secretary Jim Mattis and Secretary of State Rex Tillerson said Thursday that the U.S. still has the option of using military force. According to Mattis:

I can just assure that in close collaboration with our allies there are strong military consequences if [North Korea] initiates hostilities.

Obviously, any diplomatic effort in any situation where you have this level of threat that we’re confronted with, a threat of proportions that none of us like to contemplate, has to be backed by a strong military consequence if North Korea chooses wrongly.

The statements by Mattis and Tillerson are presented by the media as contradicting Bannon’s position, but that is clearly not true. Mattis and Tillerson are saying that if North Korea initiates hostilities, then they will get a strong military response. Bannon is saying that if North Korea does NOT initiate hostilities, but instead continues development of nuclear weapons and ballistic missiles, then it’s inevitable that they will develop a nuclear ballistic missile, and then we will be more or less at their mercy. Those statements are not contradictory.

And Graham’s is not contradictory either. It says that, one way or another, war with North Korea is “inevitable,” and that an effort will be made to confine the war to the Korean peninsula. That is a worthwhile objective, but it is totally delusional to believe that it could succeed in a generational Crisis era. American Prospect and Washington Examiner