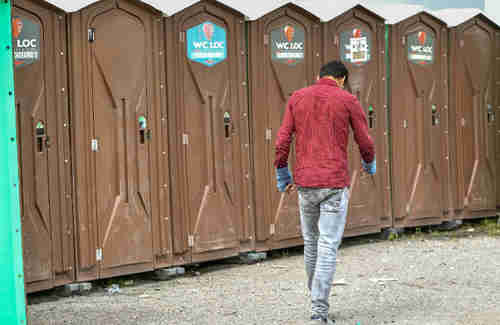 As many as 200 migrants using sticks and iron bars as weapons were involved in mass brawls on Wednesday in France’s port city of Calais. About 20 people were injured, though none seriously, and five people were arrested.

The fighting was apparently caused by a drunk migrant during the distribution of free food by a local charity, the Auberge des Migrants.

Last year, Calais was the home to a huge migrant camp called “The Jungle,” housing about 7,000 migrants. French authorities shut the camp down in October of last year, forcing the migrants to disperse or to be housed in refugee centers in other parts of France. At those refugee centers, migrants are given a chance to apply for asylum and are deported back to their home countries if asylum is not granted.

This is not the first brawl since the closure of The Jungle. In early July, a brawl between African migrants from Eritrea and Ethiopia left 16 injured.

In April, a refugee camp in Dunkirk in northern France was burnt to the ground. Many of the 1,600 migrants had been living in The Jungle before that camp was closed. The original population of the Dunkirk camp was Iraqi and Kurdish migrants, but the new arrivals were Afghans who did not get along with the Iraqis and Kurds, leading to violence. Fighting between the different ethnic groups began in the early evening and continued well into the night. During the fighting, multiple fires were set on purpose, burning the entire camp to the ground.

When The Jungle camp was demolished last year, many of the evicted migrants burnt their tents and shanties to the ground as a way of saying goodbye. Radio France Internationale and Sky News

Authorities fear that a new ‘Jungle’ is forming in Calais France

Migrants continue to arrive in Calais, and authorities fear that a new “Jungle” is emerging. French authorities estimate that there are 400 migrants to be in the Calais area, although aid agencies put the number at closer to 700.

According to figures from France’s Interior Ministry, migrants have made over 30,000 illegal attempts to reach Britain from Calais so far this year. There were 17,867 attempts to break into the fortified zone around the port and Channel Tunnel, and there were 12,349 attempts to stow away on UK-bound trucks. There are reports that two new migrant welcome centers will be opened near Calais.

As we reported several weeks ago, a court in France ordered Calais officials, within ten days, to provide drinking fountains, toilets and showers to migrants who are “exposed to inhuman and degrading conditions” in the area.

However, an official at the charity said that is not enough. “It’s less than minimal. [The authorities’] interpretation (of the order) is worrying. We hope it’s just a first step, which is clearly inadequate.”