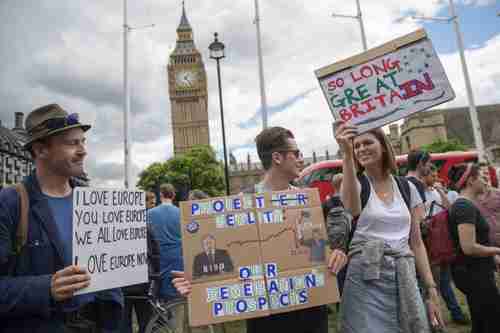 Britain’s opposition Labor party made a dramatic policy U-turn on Saturday on the terms of Brexit negotiations. The new position leaves open the possibility that when Britain formally leaves the European Union on March 29, 2019, the terms of the UK-EU relationship will be essentially unchanged for years, and possibly forever. This could effectively nullify Brexit, for all practical purposes.

Britain’s Tory government, headed by prime minister Theresa May, has been struggling to define policies for the UK-EU relationship after March 2019 and has had little success so far. The intention is that there will be a “transitional period” for two years, during which further negotiations will take place on the terms of the final separation.

There are hardliners on both the UK and EU negotiating sides that are going to make any agreement very difficult. The terms of any agreement will have to be approved by all 27 remaining EU members, by the UK government, and possibly by the UK parliament. It seems unlikely that any agreement whatsoever will be reached on anything, at least until late in 2018, when the time is so late and the situation so desperate that the parties will be forced to agree to something.

Keir Starmer, the shadow Brexit secretary of the shadow government of Labor party leader Jeremy Corbyn, published a proposal on Saturday that the UK negotiate a transitional deal with the EU that preserves the UK’s continued membership in the EU single market, accepting all the terms of that membership, including free movement of people through Europe, including the UK, and accepting the jurisdiction of the European Court of Justice as having a higher priority than the UK’s own courts.

These are exactly the policies that drove the passage of the Brexit referendum – blocking immigrants from reaching Britain, and giving Britain jurisdiction over its own laws – so the Labor proposal effectively negates Brexit, especially if the Labor transitional deal lasts more than two years.

According to some analysts, this proposal could run into trouble because it will be violating the terms of rules for exiting the EU described in Article 50 of the Lisbon Treaty, and therefore could be rejected by the European Court of Justice. The Germany parliament may also oppose the proposal.

The negotiations this fall are expected to be extremely bitter and vitriolic on all sides. Guardian (London, 26-Aug) and Telegraph (London) and EuroIntelligence

The proposal by Labor is very simple because it says that everything should be as before, with all the same privileges, rules and restrictions of the existing relationship.

Theresa May has a much more difficult problem. A proposal that honors the spirit of Brexit requires that every minute law and regulation adopted by the EU and the UK over a period of decades be renegotiated. In fact, the EU and UK sides cannot even agree which policies are to be negotiated first.

The Tories are insisting that the terms of the trade relationship, or “customs union,” between the UK and EU be agreed as quickly as possible, so that businesses on both sides will be able to plan for March 2019. The UK says that they cannot agree on other things until they have determined what the trade relationship will be.

The trade issue, when negotiations finally begin, is liable to be just as contentious. Theresa May would like an agreement of a “customs union” that would allow for “frictionless trade” between the UK and EU, with minimum rules and custom duties. She would also like for UK to be able to begin negotiating trade deals with other countries, such as the U.S. and China.

The problem with that proposal is that it makes a customs union impossible. The idea behind the EU single market is that anyone can trade with anyone else in the customs union with no tariffs, but imports from other countries could be taxed to protect European agriculture and other products. But if the UK is part of the EU single market, and the UK can also make its own deals with other countries, then other countries could then gain tariff-free trade with the entire EU simply by trans-shipping all goods through the UK. Business Insider (16-Feb) and UK government Brexit position papers

Ireland and Northern Ireland have an extremely bloody history, largely fought between the indigenous Gaelics versus the descendants of the English and Scottish invaders. (See “23-Jun-11 News — Sectarian violence in Northern Ireland grows again”)

During the 1960s-90s, in a period known as “the Troubles,” there was a great deal of violence in Northern Ireland. It was mostly resolved by the “Good Friday agreement” in 1998, and part of that agreement is that the border between Ireland and Northern Ireland must be completely open.

If the UK leaves the EU under Brexit, then the border in Ireland would be a border between the UK and EU, subject to the usual tariffs and customs rules.

Theresa May is proposing some kind of “invisible electronic border” between Ireland and Northern Ireland, but Ireland’s EU Commissioner Phil Hogan says that this is delusional:

I think that there’s a high level of delusion in London at the moment about what is required to be done.

But if there is an appetite for a pragmatic and reasonable outcome to a free-trade agreement, well then membership of the customs union would make a significant contribution to this.

I’m very concerned about the Irish question. Ireland is probably the biggest victim of this mess. [UK ministers] still don’t realize that the other 27 [member states] have to agree to this transition period of two or three years or whatever they’re going to be seeking.

An Irish Government source confirmed it is prepared to use the “nuclear option” of vetoing the transition period. UK Brexit policy on Ireland and Independent (Ireland)