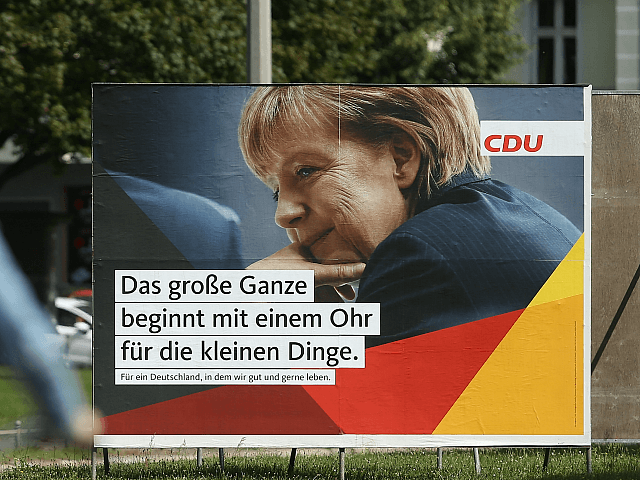 It appears that Angela Merkel has won a fourth term as Chancellor of Germany, although the relatively weak win will make it difficult for her to form a governing coalition. Turnout was high, at 75%, compared to 71% in the 2013 election. But perhaps the biggest news from Sunday’s election is not Merkel’s victory, but rather the rise of the far-right AfD party. (The phrase “far-right” has different meanings in Europe and America.)

Angela Merkel’s center-right party, the Christian Democratic Union (CDU/SDU), has won a plurality of the votes in Germany’s national election on Sunday, with 33% of the votes (according to exit polls), down 8.5 percentage points from 41.5% in the 2013 election. The CDU has been the governing party for most of the decades since the end of World War II, having positioned itself at the party of Christian democracy, while shedding the Nazism of the 1930s, but this is its weakest post-war showing.

Merkel’s CDU has only 33% of the votes, which is not a majority, which means that if she wants to govern as Chancellor, then she must form a governing coalition with other parties. In the past, the center-right CDU has joined in a coalition with the center-left Social Democratic Party (SDP). The SDP received 20.5% of the votes in this election, and so the CDU and SDP could, once again, form a majority coalition. But the SDP leaders said that they will refuse to form a coalition with the CDU, and the rise of the AfD is one of the reasons.

The far-right party AfD (Alternative für Deutschland, Alternative for Germany), received 13% of the votes, gaining 8.5 percentage points since 2013. This is extremely significant in German politics, because it means that AfD is surging past the 5% minimum required to be represented in Germany’s Bundestag (parliament).

The AfD is considered nationalistic and xenophobic because of its policies that are anti-European Union, anti-immigrant, and anti-Islam.

The party was formed in 2013 when Germany led the EU in bailing out Greece. The bailout turned into an extremely vitriolic war of words between Germany and Greece, and the AfD was formed as an anti-EU party. They took their name from a phrase Merkel used in 2013, “There is no alternative,” meaning that there was no alternative to bailing out Greece.

Then, in 2015, when Angela Merkel approved the arrival of over a million Syrian refugees with the slogan “Wir schaffen es” (“We can do it”), the AfD became anti-Islam and anti-immigrant, though its leaders say that it’s not opposed to immigration, only to a flood of immigrants. In the current election, its election posters showed young women on the beach with the slogan “Burkas? We’re into bikinis,” and a young pregnant white woman with the phrase “New Germans? Let’s make them ourselves.”

Supporters of the AfD sometimes are quoted as saying, “The AfD is the new CDU.” By this they mean that after WWII, the CDU became the party of a Christian democracy in Germany, while shedding the Nazi past. AfD supporters see the CDU as having abandoned the Christian heritage, and see the AfD as the new guarantor of a Christian Germany, while ironically ignoring the return to the 1930s style of nationalism and xenophobia.

So if Merkel’s first-place CDU forms a governing coalition with the second-place SDP, then third-place AfD will become the major opposition party, which would give them a special status in the Bundestag. For that reason, apparently, the SDP is rejecting a coalition with Merkel’s CDU, so that the SDP can be the main opposition party, and prevent AfD from achieving that special status.

So Merkel will have to form a coalition from some of the smaller parties. The Greens (Die Grüne, at 9%) are advocating strong environmental regulations. This contrasts strongly with the Free Democratic Party (FDP, at 10.7%), which is business-friendly. So Merkel would have to perform some difficult political juggling to form a three-way coalition with those two parties.

That leaves Die Linke (the Left, 9.1%), which is the current incarnation of the 1930s Communist Party. Party leaders said on Sunday that they wanted to stay out of a coalition, so that they would be free to vote on their issues.

So Sunday’s election is over, but the chaos is just beginning. It’s not an absolute certainty that Merkel will come out of all this as the Chancellor for a fourth term, but analysts consider it to be a very likely. Deutsche Welle and Guardian (London)

As I’ve been writing for years from the point of view of Generational Dynamics, we’re deep into a generational Crisis era, and nationalism and xenophobia have been increasing in most nations around the world.

Whenever I write about this, many people believe that I’m writing about xenophobia directed at Muslims. While that’s true in the case of Germany’s AfD, the target varies widely from country to country, and the target is usually a target of political convenience.

A good example is the UK, which voted for Brexit largely because of immigration issues related to the EU rules about “freedom of movement.” In the EU context, “freedom of movement” refers to EU citizens being able to move freely from EU country to EU country, and although immigration of Syrian refugees was a part of the Brexit motivation, the main issue was actually European Union citizens from eastern European countries like Poland, Romania and Bulgaria. So the UK’s xenophobia was directed mostly at Christians from eastern Europe. In the United States as well, there is xenophobia directed at Mexicans, who are also Christian.

In the case of Germany, many Jews are concerned that the rise of the AfD means a possible new Holocaust at some time in the future. There are some 200,000 Jews living in Germany, and post-war Germany has gained a reputation as a safe, tolerant place for Jews to live, although Jews point to official data reporting 681 anti-Semitic crimes reported to police so far this year.

As the saying goes, “History doesn’t repeat itself, but it rhymes.” What this means is that in each generational Crisis era, there are behaviors that are similar in kind to the behaviors of the previous generational Crisis era, in this case the period leading up to and including World War II. Like most countries, Germany does seem to be on a trend line of increasing nationalism and xenophobia, and if this trend continues, Germany could witness widespread racist hate crimes, as in the 1930s. However, for what it’s worth, we don’t yet know whether this will be directed at Jews, as it was in the 1930s. However, even if it’s directed just at Muslims it would be equally disastrous, and historians of the 2030s may look back and say that there were two Holocausts in the preceding century, one targeting the Jews and one targeting the Muslims. Der Spiegel and Deutsche Welle and Reuters and Jerusalem Post and Foreign Policy (11-Sept)