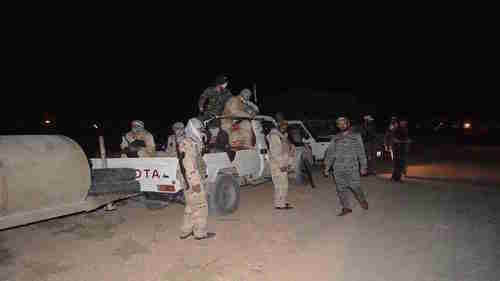 Iraqi forces along with Iranian-trained paramilitaries have been seen on Friday morning massing near Kurdish-occupied Kirkuk in northeastern Iraq. Iraq has rejected Kurdistan’s independence referendum, and oil-rich Kirkuk has become a flash point.

It is not known whether the massing of Iraqi forces is simply a show of force, or is the prelude to a full-scale attack on Kirkuk. Kurdistan 24

Egypt announced on Thursday that the Palestinian factions Fatah and Hamas had reached a reconciliation agreement, as an outcome of the Egypt-sponsored reconciliation talks being held in Cairo.

Thousands of Palestinians took to the streets across Gaza on Thursday in celebration of the agreement, with loudspeakers on open cars blasting national songs, youths dancing and hugging and many waving Palestine and Egyptian flags.

As expected, the agreement did not even attempt to address the two major issues splitting Fatah and Hamas:

As we pointed out yesterday, the average of Gaza’s population is 16.9, and so the Izzadin Kassam brigades is undoubtedly heavily populated with teenagers who wouldn’t be inclined to take orders from 82-year-old Mahmoud Abbas anyway.

Nonetheless, this agreement was greeted with loud cheers from Gaza civilians, because it promises respite from heavy sanctions that have been imposed on Gaza by both Egypt and Fatah. Egypt rarely opens the Rafah crossing between Gaza and Egypt, and so it is impossible for Palestinians to leave Gaza or for supplies to be brought in. The agreement calls for the Rafah crossing to be controlled by the Fatah-Hamas unity government.

The agreement supposedly transfers administrative control of Gaza to Abbas’s Palestinian Authority (PA) as of December 1, subject to further negotiations in November.

The agreement also stipulates that legislative, presidential and national council elections should be conducted within one year of its signing. It is worth remembering that the open rift between Hamas and Fatah began in 2006 when Hamas resoundingly defeated Fatah in legislative elections. If there is a presidential election, then it is very likely that Mahmoud Abbas will be replaced by someone much younger and much less willing to compromise, and much more willing to fight a war with Israel. Al Ahram (Cairo) and Reuters and BBC

The first convoy of Turkey’s military forces crossed into Syria’s Idlib province late on Thursday. This is the first deployment following Saturday’s announcement by Turkey of a major military operation in Idlib province. The purpose of the operation is to establish a “de-escalation zone,” as agreed in July by Turkey, Russia and Iran, meeting in Astana, Kazakhstan.

The primary objective of the de-escalation zone operation is to bring peace to Idlib by protecting Sunni Muslims from Bashar al-Assad’s forces and by keeping the different anti-Assad rebel groups from fighting each other. It had been expected that the Turkish forces would evict al-Qaeda linked Hayat Tahrir al-Sham (HTS) from Idlib in order to reach this objective.

HTS was not part of the de-escalation deal and opposed it. But HTS militias in the last few days have been seen escorting Turkish reconnaissance teams into Idlib, suggesting that Turkey and HTS have reached a peace agreement, or at least a ceasefire agreement, for the time being.

So for the time being, Turkey’s incursion into Idlib has these objectives:

According to reports, Abu Mohammad al-Julani, the head of HTS, is deeply distrusted by moderate rebel groups (Failaq al-Sham, Nour al-Din al-Zinki brigades, and Ahrar al-Sham), who are eager to initiate a conflict with HTS.

Warplanes from Russia and al-Assad have been stepping up airstrikes on Syrian civilians, including women and children, striking hospital and schools. Civilians in Idlib, many of whom fled Aleppo, are reluctantly accepting the need for Turkish forces. According to one resident, “Turkey intervening may be the best solution to Syria’s situation because Russia and Assad will stop at nothing to destroy the whole of Syria.” Daily Sabah (Ankara) and Reuters and Syria Deeply and Middle East Eye