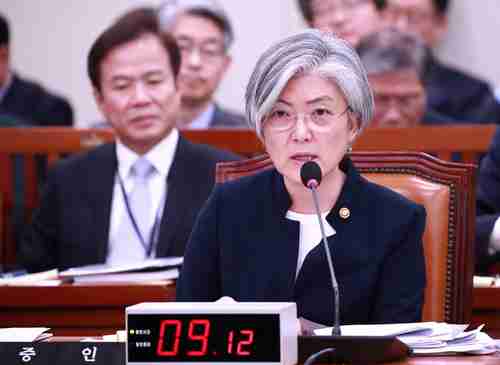 In a surprise announcement, China agreed to remove the harsh economic sanctions that it had imposed on South Korea in anger over South Korea’s deployment of America’s advanced Terminal High Altitude Area Defense (THAAD) anti-missile system.

In July of last year, South Korea’s President Park Geun-hye announced her decision to deploy the THAAD system on South Korean soil. This was specifically a reaction to ballistic missile and nuclear threats from North Korea, but it infuriated China because THAAD’s powerful radar could also give early warning to the United States of a pre-emptive missile attack by China on the United States.

Early this year, news broke that the Lotte Group, a South Korean multinational conglomerate, had agreed to a land swap that would allow THAAD to be deployed on a piece of land previously owned by the company. The enraged Chinese imposed harsh economic sanctions, particularly targeting Lotte Department Stores in China and South Korea with a boycott.

Despite the sanctions, the first THAAD deployments began in March, with two launchers.

So it was unexpected that South Korea and China issued a statement on Tuesday that “The two sides attach great importance to the Korea-China relationship,” and that they would establish normal relations as quickly as possible.

According to China’s Foreign Ministry at a press conference on Tuesday:

China’s position on the THAAD issue has been clear and consistent, which remains unchanged. We have noted that the ROK stated publicly that the ROK [Republic of Korea – South Korea] will not join the US anti-missile system, develop the ROK-US-Japan security cooperation into a tripartite military alliance or make additional deployment of the THAAD system, and the current THAAD deployment in the ROK will not undermine China’s strategic security interests. We hope that the ROK will match word to deed and follow through on these remarks to properly handle the relevant issue.

Properly handing the THAAD issue and removing the obstacles to China-ROK relations are the shared aspiration of the two countries and conform to the common interests of the two sides, we hope the two sides can jointly work to bring the bilateral relations back to the track of normal development.

I find this to be a very strange statement because the wording implies low expectations that the détente between the two countries will succeed. The statement does not explicitly say that China is lifting its economic sanctions, and it only expresses hope that South Korea will not develop a closer military alliance with the United States – in particular that no more THAAD launchers will be deployed.

There was one more Q&A at the press conference that I found strange:

Q: China said several times that the people-to-people and cultural exchange calls for public support. As the ROK and China reached agreement, what change does China expect to see in public opinion?

A: As we all can see, for some time, the feelings and relations between the Chinese and ROK people have been affected by the THAAD issue. We hope that the two sides can properly handle the THAAD issue and bring the normal exchange and cooperation in various fields back to the track of normal development. We believe this is of positive significance to the change of public opinion in the two countries.

There have been reports that 200 North Korean workers were killed in a series of tunnel collapses on October 10 at the main North Korean nuclear testing site at Mount Mantap. These reports come from a single unverified North Korean report and are doubted by some analysts.

However, what is apparently certain is that senior Chinese nuclear scientists and geologists are saying that any further nuclear bomb tests could risk a huge nuclear disaster that would affect both North Korea and China.

The problem is that Mount Mantap, where North Korea has conducted five underground nuclear tests, is now in danger of collapsing completely, releasing huge amounts of radiation and nuclear debris that would affect large parts of northeastern China.

The warnings have been delivered directly to North Korean scientists by nuclear scientists at the Chinese Academy of Sciences’ Institute of Geology and Geophysics. They warned North Korea that further nuclear tests could blow the top off Mount Mantap and spark a potential catastrophic collapse at the nuclear testing site, resulting in radiation releases and other forms of contamination. The warnings were summarized by an unnamed researcher at Peking University:

China cannot sit and wait until the site implodes. Our instruments can detect nuclear fallout when it arrives, but it will be too late by then. There will be public panic and anger at the government for not taking action.

Maybe the North Koreans themselves have realized that the site cannot take another blow. If they still want to do it, they have to do it somewhere else.

It could be the most powerful detonation of an H-bomb in the Pacific. We have no idea about what actions could be taken as it will be ordered by leader Kim Jong-un.

This would, of course, be equally disastrous, as the explosion could affect any aircraft or sea vessels in the area, and the radiation could be carried by the winds to any country bordering the Pacific. News Corp Australia and South China Morning Post and Chosun (Seoul)