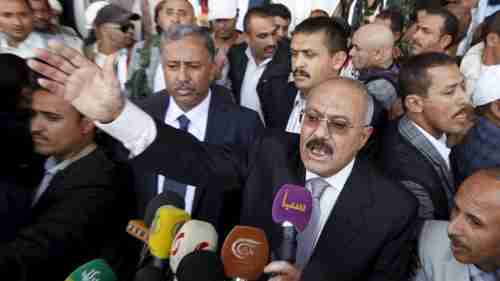 A web site reader posted this message on Sunday:

Every day astounds me more than the last. I suppose that’s one of the distinguishing features of “times like these.” In Generational Crisis times, time seems to be compressed. One ‘panic’ or another is just hours away, it seems, and great swathes of ‘public opinion’ change course mid-air like a disturbed mega-flock of starlings.

On Monday, the time compression seemed to increase, with three crises all seeming to accelerate at the same time on the same day: Yemen, North Korea, and Brexit.

It was just two days ago that I wrote a lengthy article about a big change in the Yemen war, which has become a proxy war between Iran and Saudi Arabia. Previously, the Iran-backed Houthis were allied with Yemen’s former president Ali Abdullah Saleh, fighting against the militias supporting Saudi Arabia.

Saleh has always been a master politician at deftly switching sides, forming alliances of convenience, and then betraying his former allies. Last week, he performed this act again, breaking his alliance with the Houthis, and forming an alliance with the Saudis. But this turned out to be his last act.

The Houthis were furious at Saleh’s betrayal and “treason,” and apparently took revenge on him on Monday, when he was ambushed and killed in his convoy at a checkpoint in Yemen’s capital city Sanaa.

Analysts are saying that this is a victory for the Houthis and Iran, but it also weakens the Houthis in the sense that it will further split the tribes previously allied with the Houthis. In particular, in some scenarios, many of Saleh’s militias that were fighting alongside the Houthis in the past may attack the Houthis for revenge and firmly side with the Saudis. Another scenario is that the pro-Saleh tribes will splinter and become ineffective.

The effects of Saleh’s death will depend on what the Saudis and Iranians do next. Saleh’s son in Saudi Arabia is being proposed as his replacement. The only thing that is certain is that Saleh’s death guarantees more chaos.

The death of Saleh is expected to complicate Tuesday’s meeting of the Gulf Cooperation Council (GCC). The GCC is an alliance of six Arab countries – Bahrain, Kuwait, Oman, Qatar, Saudi Arabia and the United Arab Emirates (UAE) – on the Arabian Gulf. The GCC is already splintered because of Saudi Arabia’s air, land and sea blockade on another GCC member, Qatar. Kuwait has been acting as a mediator, and some analysts hoped that Tuesday’s meeting would be used to negotiate an end to the blockade of Qatar. However, Tuesday’s agenda is likely to be hijacked by the Yemen issue after the death of Saleh. Some analysts are saying that the GCC is near complete collapse. National Yemen and BBC and Al Jazeera

US officials plan for military strike on North Korea and war

Over the weekend, the full realization of what the U.S. is facing from North Korea became more clear and starker. It is clear that for three decades, U.S. administrations have simply appeased the North Koreans, falling time after time for North Korean promises that they had no intention of keeping, just as Hitler was planning for full-scale war as he promised “peace in our time.”

If we continue on the same path as the last three decades, then:

Many people believe that China and Russia would welcome these developments by the North Koreans since the missiles would be pointed at America, not at China or Russia.

The administration seems to be signaling every day that we are one day closer to war because of the North Korean threat.

The greatest immediate threat to the United States and to the world is the threat posed by the rogue regime in North Korea and his continued efforts to develop a long range nuclear capability.

I think [the threat] is increasing every day. It means we’re in a race. We’re in a race to be able to solve this problem.

There are ways to address this problem short of armed conflict, but it is a race because he’s getting closer and closer and there’s not much time left.

Sen. Lindsey Graham on CBS News said that the American military should start preparing for war:

We’re getting close to a military conflict because North Korea’s marching toward marrying up the technology of an I.C.B.M. with a nuclear weapon on top that cannot only get to America but deliver the weapon. We’re running out of time. McMaster said that yesterday. I’m going to urge the Pentagon not to send any more dependents to South Korea.

South Korea should be an unaccompanied tour. It’s crazy to send spouses and children to South Korea, given the provocation of North Korea. So I want them to stop sending dependents. And I think it’s now time to start moving American dependents out of South Korea.

[Trump has] got the best national security team of anybody I’ve seen since I’ve been in Washington. The president, himself, early on, made the right decision: ‘I’m not going to allow North Korea to hit America with a nuclear weapon. We’re not going to live under that threat. If I have to go to war, and I don’t want to, to stop it, I will.’

Everybody before President Trump screwed it up, including Republicans. Now we need to get it right. And I think he’s got the right approach. He’s got the right team. I hope China will help us. We’re running out of time.

What would a military strike on North Korea look like? On Fox Business Network on Monday, retired army lieutenant colonel Ralph Peters described it as follow (my transcription):

This is not a question of a few surgical strikes. If we wanted to destroy, DESTROY their capability to build a fleet of ICBMs, with mated nuclear warheads, it would require an intensive campaign, primarily, not exclusively from the air. It would run a minimum of several weeks, possibly months – you can’t predict these things once you start pulling triggers.

And ultimately the question is the regime in North Korea: can, should it survive?

Is it better to put American cities at risk of nuclear catastrophe or at least nuclear blackmail, or to act while we can?

The logic of the imminent North Korean threat and these statements from American officials is that a war is likely within 6-18 months.

South Korea and the US are holding joint military drills, the largest ever, involving 12,000 US troops. There are also 230 US fighter jets, including the brand new F-35 Lightning, two dozen stealth jets, and over 200 fighters and bombers. North Korea has called it a “preparation for war,” and threatened unspecified action. Fox News and CBS News

Until midday Monday, the European media were reporting that a breakthrough in the Brexit negotiations between the UK and EU was imminent. The reason that a breakthrough was predicted was because UK prime minister Theresa May had repeatedly capitulated to the demands of the EU on the three major “Phase I” issues.

The first Phase I issue was the “divorce bill,” the amount that the UK will have to pay the EU to leave, an amount as high as €60 billion. UK politician Nigel Farage, who spearheaded the Brexit movement, famously once said that “the EU can whistle for that money.” Over a period of months, May had to agree to pay something, then had to agree to pay €20 billion, and finally, last week, agreed to pay about €50 billion. The EU considered this to be enough of a commitment for the time being.

The second issue was the treatment of EU citizens working in the UK. EU officials said that May had made significant concessions, and that would be enough for the time being. However, the role of the European Court of Justice (ECJ) in rejecting UK laws is still an open question, as it has been all along.

The third issue is the problem of the border between Northern Ireland, which is part of the UK, and the Republic of Ireland, which is part of the EU. When the UK leaves the EU, there would have to be border controls between Ireland and Northern Ireland, a concept that almost everyone rejects, because any border controls are thought likely to result in a renewal of “The Troubles,” the decades of violence between the indigenous ethnic Irish Gaelics (Catholic, Republican) and the descendants of the English and Scottish invaders (Protestant, Unionist).

So apparently Theresa May’s staff came up with some language late last week that seemed to satisfy everyone. The details are unknown, but it would provide some kind of special regulatory status to Northern Ireland that would allow the borders to remain open. It was that level of agreement that led the media to expect a breakthrough on Monday, and Theresa May went off the Brussels to sign the deal.

While in Brussels, Theresa May placed a phone call to the Arlene Foster, the leader of Northern Ireland’s Democratic Unionist Party (DUP), and Foster vetoed the plan. She said:

The DUP is a very small but critical part of Theresa May’s governing coalition, but if they turn against her, then there will be new elections in Britain. This is somewhat comical since it is an outcome nobody wants. May and her Tory party would probably lose the election to the Labor Party, and the ultra-leftist Jeremy Corbyn would become prime minister. Corbyn supports the Irish Republican Army (IRA) in Ireland, which is the DUP’s traditional enemy. Would Corbyn like to be prime minister and take over Brexit negotiations with the EU? My guess is that he enjoys seeing May take all the flak in trying to solve the intractable Ireland problem.

On top of the veto by the DUP, the leaders of Scotland and Wales, and the mayor of London all tweeted that if Northern Ireland gets special treatment, then they should get special treatment too. Their tweets are shown in the above graphic.

EU and UK leaders hope that these problems can all be resolved by the December 14 summit meeting in Brussels. If so, then negotiations will move onto trade issues, and those issues will be far more difficult to resolve than the three Phase I issues. It’s very hard to get past the feeling that Brexit is a complete disaster for the UK, and probably for the EU as well. Irish Times and BBC