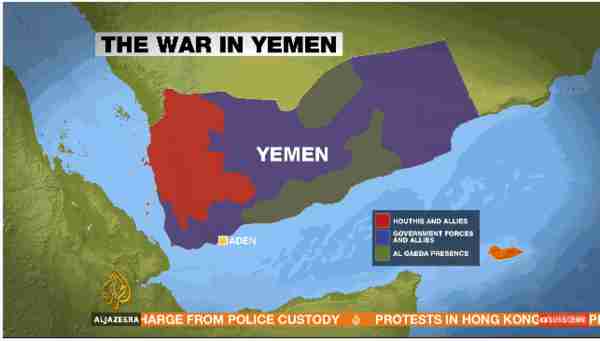 Dozens of people were killed or wounded on Sunday in the port city of Aden on the southern coast of Yemen as the result of clashes between the forces of the official government of Yemen, backed by Saudi Arabia, versus the Southern Transitional Council (STC), a separatist faction backed by United Arab Emirates (UAE) and claiming Aden as the capital city of Southern Yemen.

In addition, there is one more major non-government force in Yemen, and that is Al-Qaeda on the Arabian Peninsula (AQAP). In recent years, AQAP’s leadership has turned from harshly ideological Sharia policies that alienated the tribal populace into pragmatists that are making allies of tribal leaders, by providing security, protection, and a measure of stability.

Since Saudi Arabia and UAE are supposed to be allies, this development is being called a “war within a war.” There have been reports that officials in both Saudi Arabia and UAE are ordering their militaries to stop shooting in Aden and to resolve the issues. If the shooting does not stop, then it will be AQAP that gains in the south, and the Houthis that will gain in the north. Reuters and Al-Jazeera and The National (UAE) and Jamestown

Because of its location, the port city of Aden has been strategically important for centuries. In 1839, Britain captured the port of Aden and southern Yemen from the Ottomans and was made part of British India. Britain ruled Aden and southern Yemen, consisting of 24 tribal states (sultanates, emirates, and sheikdoms), until the 1960s.

Yemen’s last generational crisis war was the Yemen Civil war, which began in 1962, and was largely a proxy war involving forces from Egypt, Russia, Saudi Arabia, Britain, the United States, and (pre-revolutionary) Iran. The Yemen Civil War ended in 1968, and in the diplomacy that followed, in February 1970 Yemen was split into the Yemen Arab Republic (YAR, North Yemen) allied with Saudi Arabia, and the People’s Democratic Republic of Yemen (PDRY, South Yemen), a Marxist communist country allied with Russia. South Yemen was the Arab world’s only communist state so far.

In 1990, at the end of the generational Recovery era, the two countries were unified into a single country, Yemen, in an agreement designed to eliminate all the tensions between the two countries. In many ways, this was a marriage of convenience, since relations remained tense, but it put Ali Abdullah Saleh into a clear position of leadership. There was an attempt at secession by southern secessionists in 1994, but it was put down quickly, leading to the entrenchment of Saleh’s northern-based regime. Saleh governed Yemen most of the time since then until he was killed in December 2017.

Saleh was the country’s president until 2011, when he was ousted as an outcome of the “Arab Spring” that affected countries throughout the region. Saleh was forced to turn the office of president over to his vice president, Abdu Rabu Mansour Hadi. Saleh then formed a “marriage of convenience” with the Iran-back Shia Zaydi Houthis in northwest Yemen. On September 21, 2014, Saleh and the Houthis captured Sanaa from Hadi’s forces. Hadi was forced to flee Sanaa and has been living in exile in Saudi Arabia for two years. From the point of view of the international community, Hadi is still president of Yemen.

Since 2015, the war in Yemen was largely a proxy war between Iran versus a Saudi Arabia-United Arab Emirates (UAE) coalition. In November 2017, Saudi Arabia imposed a land, air and sea blockade on Yemen, giving as a reason to prevent the Houthis from importing more of Iran’s weapons systems.

This blockade was a humanitarian disaster for Yemen. Yemen is already one of the poorest countries in the world and, because of the proxy war, mass starvation and disease have been spreading across the country. Aid from NGOs was only partially relieving the situation, but with the Saudi blockade, even that aid was cut off.

The blockade was apparently too much for Saleh. Early in December, he announced that he was separating from the Houthis and offered to mediate a ceasefire between the Houthis and Saudi Arabia. Three days later, the Houthis had him ambushed and killed.

The death of Saleh fragmented tribal opposition to the Houthis in North Yemen, giving the Houthis more substantial control over the north.

Now the UAE is backing the secessionist Southern Transitional Council (STC), indicating that the coalition fighting the Houthis is also fragmenting. In addition to making it even harder for NGOs to provide aid to help prevent massive starvation and cholera, this “war within a war” will help AQAP gain further control through alliances with other tribes.

Writing anything about Yemen, you cannot help but feel sorry for this poor country. Because of the country’s strategic location, everyone wants a piece of it, and they are willing to fight proxy wars to get a piece. It is only the people suffering endless misery and poverty, as helpless pawns subject to constant bombings, starvation, and cholera. It reminds one of the old African proverb: When elephants fight, it’s the grass that suffers. History.com and Global Security and Harvard – History of Yemen Civil War – 1962-68 (PDF)