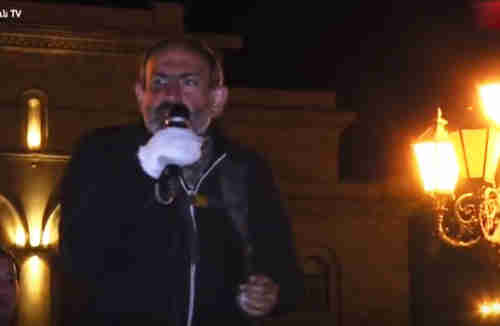 Nikol Pashinyan, late Tuesday evening, calling for his supporters on Wednesday to block buildings and roads. The violence gave him a black eye, and there is some blood on his bandaged right hand. (lragir.am)

Nikol Pashinyan, a member of Armenia’s parliament from the opposition Yelk party, is calling for a “non-violent velvet revolution,” alluding to the peaceful 1989 uprising that ousted the Communist regime in the former Czechoslovakia. Pashinyan’s objective is to prevent Serzh Sargsyan, who has served ten years as Armenia’s president, from continuing in power as Armenia’s prime minister under a new constitution.

Protesters are particularly incensed that Sargsyan had promised not to run for prime minister after the constitution was changed, but now is running anyway.

With protesters chanting “Serzh the liar,” Pashinyan has been calling for widespread strikes and blockades of streets and government buildings in Armenia’s capital city Yerevan, with the objective of preventing the parliament from voting to make Sargsyan the prime minister.

There were widespread protests across several cities, with students blocking roads and buildings. At least 46 people were injured in the protests, including six police officers. More than 60 people were arrested. Pashinyan himself was taken to a hospital with cuts and an eye injury, but he returned to speak to the crowd and urge further protests.

On Tuesday, the parliament voted overwhelmingly, 76 to 17 with no abstentions, to elect former president Sargsyan as the prime minister under the new constitution.

Late on Tuesday, Pashinyan addressed the crowd and called for widespread protests to block government agencies, streets and highways.

Tomorrow at 10 am, I will be waiting for you on France Square where our actions will start and will be concluded on Republic Square.

Tomorrow morning we must paralyze entire Armenia, from the 9th district to 3rd, 4th villages. Serzh Sargsyan and his servants must not have room to move in Yerevan, they must move along the crossing points that we will decide. Tomorrow we set up crossing points in Yerevan streets which are intended for the Republicans and their riffraff only.

Armenia had two generational crisis wars, over 70 years apart, during the 20th century.

The first occurred during World War I between 1915-17, when over a million Armenians were massacred and deported from their homeland in Anatolia (Turkey) to present-day Syria. Armenia considers the killings genocide, a charge that Turkey denies.

Although the war between Armenia and Azerbaijan was an external war, more research is needed on the question of the extent to which it was also an ethnic conflict between the ethnic Armenians and the ethnic Turkic population of Azerbaijan.

Media sources do not explain what Pashinyan means by “transforming it into western Azerbaijan.” This suggests an ethnic issue and requires more research. Hetq (Armenia) and BBC