Italy’s largest pro-family association has launched a nationwide campaign against abortion as the number-one killer of girls in the world.

CitizenGo, which boasts nearly 10 million members in Italy, has begun distributing flyers, posting billboards, and erecting signs up and down the Italian peninsula to inform citizens of just how widespread abortion is.

Blazoned across the different placards and signs is the simple message: “Abortion is the number one cause of femicide in the world.” The crusade has been timed to begin just days before Italy’s annual March for Life in Rome, slated for Saturday, May 19.

According to Worldometers, an independent website that posts live counters of world statistics in real time, so far in 2018 there have been more than 15.3 million abortions worldwide, as compared to 21.3 million deaths from causes other than abortion.

The cultural battle over abortion is fierce in this once Catholic nation, where abortion during the first trimester of pregnancy became legal in 1978. The Italian law stipulates a waiting period of seven days between the medical authorization of the procedure and the abortion itself.

In April, a large pro-life billboard that had been posted in the city of Rome not far from the Vatican was removed by a direct order from the mayor’s office. In an April 5 press conference, Virginia Raggi, the mayor of the city, said, “We have already informed the offices and they are taking care of it.” 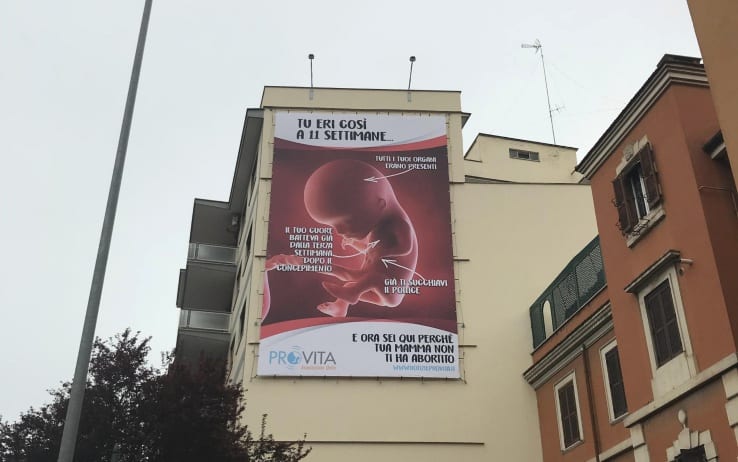 Brandi further noted that the sign contained “nothing insolent or aggressive, but city hall ordered the removal apparently because it was a violation of civil rights. I say apparently because ProVita has not received any communication from the municipality,” he added.

Comparing Rome’s heavy-handedness to Nazi and Soviet totalitarian methods, Brandi said that the advertising company that owns the space had received an order from city hall to remove the billboard, “which had already been paid for.”

Last year Pope Francis threw his moral weight behind Rome’s March for Life, underscoring the inviolability of human life and sending his apostolic blessing to participants in the annual march.

In a special message to the organizers of the pro-life March, Francis expressed his wish that the march might “promote adherence to the value of human life and the acceptance of this incommensurable divine gift in all its fascinating richness.”

The pope also promised his prayers for the success of the event as well as sending his “apostolic blessing” to all participants.

Francis had sent a similar message of support in January to the March for Life taking place in Paris, France.

“The Church must never tire of being an advocate for life and must not neglect to proclaim that human life is to be protected unconditionally from the moment of conception until natural death,” the Pope’s message said.

The pope has been a vocal opponent of the abortion industry, comparing those who kill unborn children to the Mafia and to the biblical figure of King Herod, who slaughtered all the male children two years old and younger around Jerusalem in an attempt to eliminate Jesus Christ before he could grow up to become king.